It has always been about doing it all when it comes to the LG’s V-series. Last year the LG V30 featured one of the most amazing cameras of all time in a smartphone, coupled with the Quad DAC audio solution which was a blessing to the music lovers. LG has decided to further step up their game this year. While other flagship smartphones of 2018 are busy featuring the dual cameras in other to allow things such as the telephoto lens options and portrait mode, LG’s has decided to add a total number of five cameras to their latest smartphone, LG V40 which was announced 2018, October.

You will find out everything you need to know about this device below.

Down to the design now. If you are among those who like how the LG V30 looks, then I’m sure you will feel comfortable with the design of the V40. The LG V40 has a well-rounded design like the typical V-series, but the game was raised a little with the 6.4-inch display.

Despite housing two different cameras in the front, the LG V40 still features a bit smaller notch when compared with other smartphones with notches. The LG V40 is designed in a way that it intelligently makes the notch less obvious when you’re on the home screen, and another good thing is that you can customize that area with different designs and colors to enable you to hide it completely.

At the back of this device are a Gorilla Glass 5 panel, three cameras, and a fingerprint scanner. At the right side of the phone is seated the SIM card tray and power button, while coming to the left is the Google Assistant button and volume rocker.

LG made their latest smartphone, LG V40 to be very light. There is also a USB Type-C port, a headphone jack at the bottom and the “resonance chamber” Boombox speaker featured in the LG G7.

The LG V40 was described as “silky” by LG’s marketing. The device feels the same just like the LG V30, this implies that the aluminum sides still feels cheap and would have been replaced by a sturdier metal.

This device is IP68 water resistant (up to 1.5m for 30 mins) and also supports wireless charging, which means you won’t be missing out on any bells or whistles if you purchase this device. 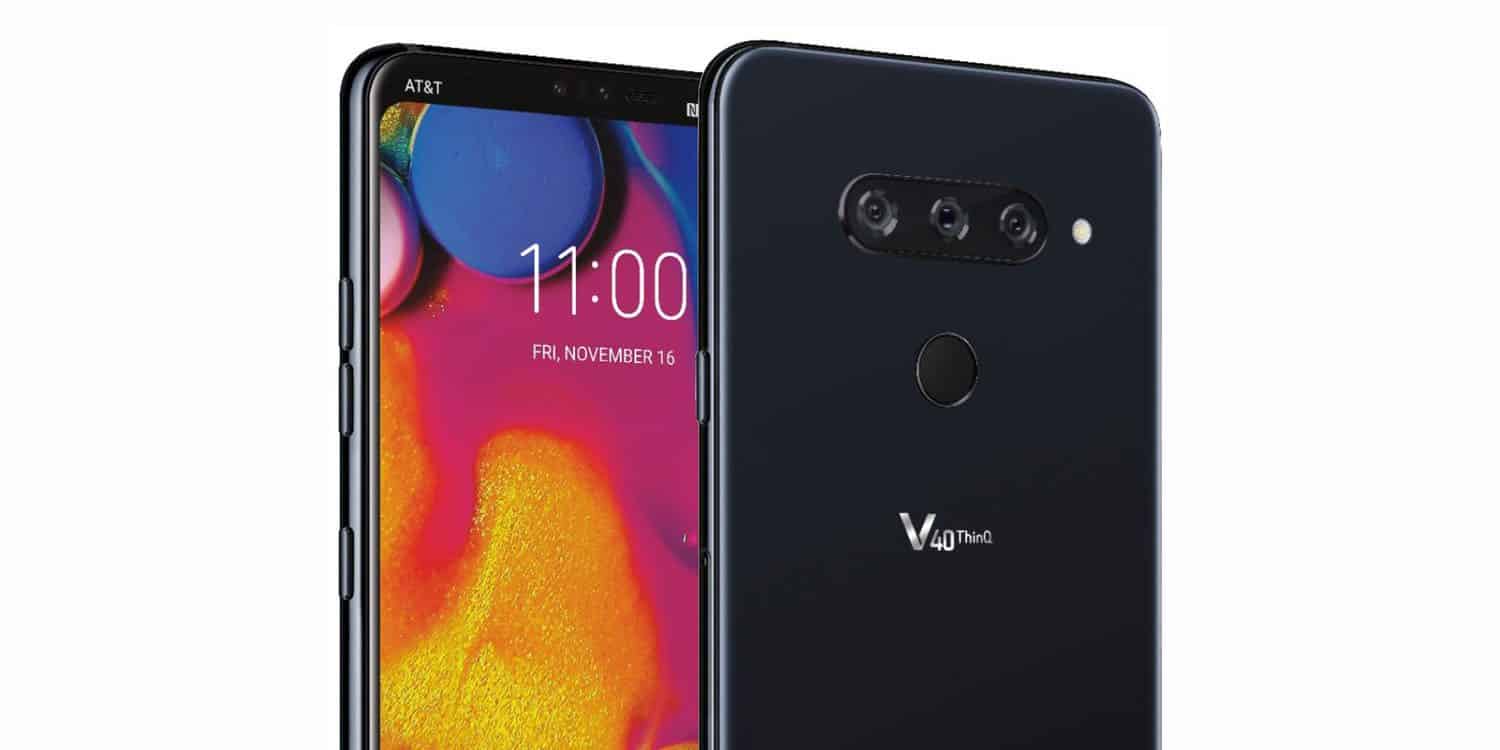 There are special tricks that these cameras employ, the software of the cameras allows you to first view all the camera angles before taking any photo simultaneously with any of the cameras or even the three cameras at the same time.

There is yet another nice feature called the Cine Shot. What this does is to allow you to create photos with moving elements (cinematography). And you can decide to do this with any of the three lenses at the rear.

Though the wid wide-angle camera has an amazing color reproduction and clarity, the 2x optical zoom sensor wasn’t that great.

Coming to the front part of the LG V40 is seated a dual camera sensors, one with an 8MP sensor, f/1.9 aperture, with an 80-degree field of view and another wide lens with a 5MP sensor (f/2.2 aperture), with a 90-degree field of view, which enables you to take wide selfies with portrait mode inclusive. The camera also features one of the trending flagship features and that is the ability to change the level of bokeh even after taking shots.

When it comes to performance,  the V40 was generally amazing just like most of the 2018 flagship devices. Nevertheless, there were minor setbacks that I noticed fairly randomly. Multitasking and Apps launched very quickly were really fast.

The LG V40 has proven itself to be a true 2018 flagship. This device is powered by the Qualcomm Snapdragon 845, coupled with a 6GB RAM and 64GB of internal storage. This device can boldly compete for head to head with many other leaders in the mobile market.

The only storage option that is available in the U.S is the 64GB. While in South Korea there will be a version of storage option of 128GB. Many other flagship smartphones in the U.S. have launched with 128, 256, and some even go as far as offering you a 512GB storage options in 2018, I feel like the V40 is lagging behind in this aspect. There is a room for an external microSD card.

The battery in the LG V40 seems to be a bit small for a device with such a large screen. The battery is 3,300mAh, which is admittedly a bit small. I’ve been using this phone for a week now, and have gotten an average of 4 hours of screen-on time, it is usually between four to five hours. This is quite poor for a device of this kind, I was expecting a 4,000mAh battery that will be able to properly compete with other smartphones like Samsung’s Note 9.

The LG V40 is quite a great device and it’s hard to think of too many ways on how you want LG to improve upon the V40. It also comes with a large screen which is great for those media lovers and to crow it all, it even got better with its three rear and two selfie cameras, giving you a total number of 5 cameras that leaves you with so many options for the Photo freaks. But, there is one problem here, this device is expensive; so for those who can afford it, I think it will be nice if you give it a try.