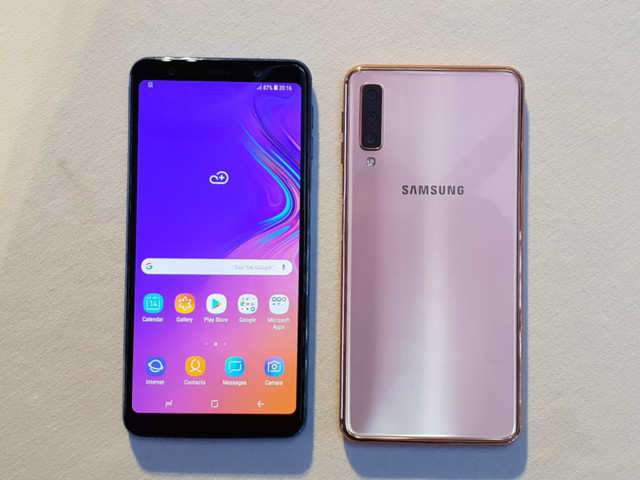 The  Galaxy A7 (2018) was announced on September 2018 and will be released in October 2018, and has been rumored to arrive with lots of alluring features. Without wasting any time, let’s go and see if all the things that have been said about this smartphone are true.

The Samsung A7 2018 arrives with that same ancestral classic look that all Samsung smartphones usually comes with. The A7 2018 does not have any notch, and it features smaller bezels which gives room for a more comprehensive view.

On the front side of this device, all that can be seen is the screen, the earpiece, the sensors and the selfie camera accompanied by a LED flash. When you look at the left-hand side, you will see just the SIM card tray for nano-SIM & external memory card.

The bottom of this smartphone houses the 3.5mm jack, speaker grilles, and the micro USB port. The back part of the Samsung A7 2018 houses the triple cameras, LED flash & the company’s logo.

The Samsung A7 2018 has a 6.0-inch Full HD+ Super AMOLED display. You can adjust the screen temperature, use the Blue Light filter to reduce eye strain and more.

The chipset also supports Dual SIM Dual VoLTE. The A7 2018 comes in two versions, the 4GB RAM + 64GB internal storage and the bigger 6GB RAM + 128GB internal storage. The storage can be further expanded up to 512GB via an external MicroSD card.

The Samsung Galaxy A7 2018 runs on the Android 8.0 Oreo. This smartphone also comes with the full-fledged Samsung Pay.

The Samsung Galaxy A7 2018 is powered by a 3,300mAh battery, which I think is average battery capacity. It’s capable of taking you for the whole day with moderate use. I was able to have a full charge, around 2 hours.

Samsung A7 2018 is sold for about £309/$459, which is equivalent to 167,535 Naira. You can purchase this smartphone from some online stores or any Samsung distributor near your region.

From my point of view, the Samsung Galaxy A7 2018 is quite okay, I mean all-around. But, there is nothing extraordinary about this smartphone. Though the triple camera concept is excellent, apart from that, there is no jaw-dropping feature.

Don’t get it twisted, the Samsung Galaxy A9 is excellent and comes with decent specifications like the nice build, beautiful cameras, and great display. But, there are other mid-range smartphones that can still confidently compete with this device.