Tecno has released an amazing device and it is tagged as “the smartphone with a power bank battery” Tecno L8 and L8 is succeeded by L8 plus this devices rocks amazing feature that no other Tecno smartphone has ever featured as it comes with a whopping 5050mAh Battery capacity, and it is a mid-range device with a nice price 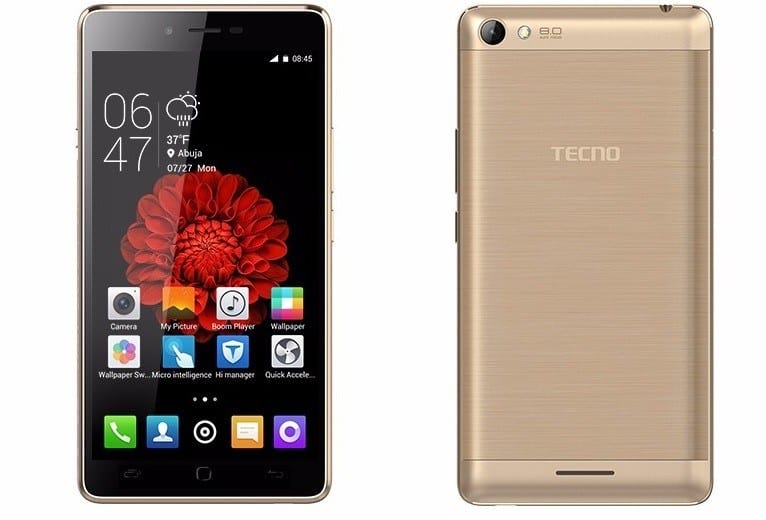 There is no Difference in the designed as both smartphones enjoy a Plastic body that allows easy grip with curved edges. It comes in a dimension of (77.5 x 1280) it also has 5.5 inches, touch capacitive screen has a resolution of 720 x 1280 pixels, 267 pixels per inch (PPI). It comes in different colors as it has Grey and Gold.

Tecno L8 comes with a 1GB Ram am sure it won’t lag when multi-tasking with normal apps, it rocks same storage as its successor L8 Plus which has a 16GB internal memory storage but users are left with a 10GB usage as the remaining are used for installed apps on the device and it allows upgrade of the memory up to 128Gb via Micro SDcard, it measures 5.5 inches screen size, touches capacitive screen has a resolution of 720 x 1280 pixels, 267 pixels per inch (PPI). It runs Android 5.1 (Lollipop), Tecno Hios UI.

The processor is also supported by 1.3GHz dual-core Cortex-A7 CPU, MediaTek MT6572 Chipset, Mali-400 GPU, the Tecno L8 and Tecno L8 Plus is built to give a lasting experience without worrying about battery life as it rocks one of the best battery life with L8 Plus as a 5050mAh packed battery inside.

L8 Plus has a nice camera as the rear camera has an 8MP and other camera features which include 3264 x 2448-pixel pictures, HDR, autofocus, Geo-tagging, panorama camera with LED flash and a front-facing camera 2MP up to 1600 x 1200-pixel pictures for your selfie.

Tecno L8 smartphone is too awesome, But also has some features that I would have preferred to have been upgraded, Like the connectivity, it lacks 4G network which would have added much of a super fast browsing and the camera just like L8Plus is not bad but not perfect I would have loved a 13MP rear and an 8MP and a front LED flash for awesome selfie,  I always notice blurry images as I take selfies at times.

This device was launched before a successor was released and they both rock same battery power as they can give a run for your time, They last a whopping talk time of about one week or more. L8 Plus offers better Ram memory to L8 which has just 1GB.

Tecno L8 Full Specification, Price and Where to Buy