Several weeks ago, I joined the team of folks who use the Android smartphone, but of course, there were quite a number of things I needed to learn about this high-end mobile phone.

Yes, I was a noob, a total noob for that matter, but there’s no point of being ashamed of this FACT. Thing is, I was a chronic BlackBerry user and life was really fun using my then BlackBerry Curve7, and plethora other curves versions.

But I guess it was time to really move on. It was time to not just think SMART but to also ACT Smart! And what better way to act smartly and quickly get things done if not with an Android smartphone?

I should confess: One of the features that have always incited me about the Android smartphone is its ability to take beautiful still and motion pictures. By “motion pictures”, I simply mean to say video captures.

I have a HUGE and of course a very BIG HEART for people. And one of the ways to really express how much I love them is to get on videos and teach them some of the things I have learned, and that has helped my entrepreneurial journey.

However, mistakes are quite inevitable, and yes, I always make a handful of them, which most times always warrant me to send my videos to Video Editors in my locale. Now, this was taking away a lot of money, and in my DICTIONARY, it’s not COOL!

Now, after a lot of research, I finally stumbled on some really great apps in the Playstore directories, well, thanks to my little brother.

My 15yr old brother is an Android geek. He’s been a mobile geek since he hit 11, and that’s one of the reasons I always root for him!

With his help, I found some of the best video editors for Android, and I am going to do well to mention just 5 of them.

I know you might be a little bit skeptical about my claims of knowing what the best video editing android apps are, but trust me, I do. But it was not without a considerable amount of research and HUGE consumption of MTN and Glo data bundles.

Okay, enough of the talks already…

Let’s dive straight into sharing with you 5 video make an app, or should I say video editing app for Android smartphone.

Price: Free / $3.99
DOWNLOAD ON GOOGLE PLAY
VivaVideo is one of the exceptionally popular video editing apps. In practice, though, it’s a very middle-of-the-road video editor. It works especially well for short clips for social media. The app uses a storyboard style of editing where you load clips, edit and trim them as needed, and then move on to the next segment. It includes over 200 video filters and various other effects, text input, and fast and slow motion support. VivaVideo has a free version that comes with a watermark and a time limit for any given video. You can remove these restrictions by buying the pro version. For the record, David, my little brother doesn’t joke with this “vivavideo” video editor maker.

Price: Free
DOWNLOAD ON GOOGLE PLAY
Adobe Premiere Clip is one of the big names when it comes to video editor apps. It has a laundry list of features, including the ability to auto-generate videos using your images and video if you don’t want to do it yourself. If that’s not your thing, you can edit your video manually using a variety of tools, effects, and music. The app boasts that you can use your own music but some users have found this process to be difficult. It does sync and work with Adobe Premiere Pro so you can start a project on one and continue on the next one. However, you’ll need an Adobe Creative Cloud account to make all the syncing work. Thing is, I am sure you love this app!

Price: Free
DOWNLOAD ON GOOGLE PLAY
Movie Maker Filmmaker is among the best free video editor apps currently available on playstore. You’ll be able to trim, crop, and reorder video content as well as set focal points. The app also boasts a variety of video effects and you can design your own custom filters, although that functionality isn’t amazingly powerful. It also has the rest of the basics, like music. The app has struggled with some bug issues since it’s major redesign, but it’s still one of the best video editing android apps out there. It’s also completely free, albeit, with ads.

Magisto is an easy-to-use video editor app, which can turn your video clips into a music videos automatically with three easy steps. Pick up your images and videos, select the desired soundtrack, and then add a title. This app is a good video editing software for Mac as well and is wonderful for people who do not want to spending too much time on video editing but still want a cool look.

Vlogi is the 1st video editing app designed for YouTubers & Vloggers with music & effects attached with it. It is a very powerful video editing application for android users. And the good thing is that it is completely free with no trial watermark. Believe me, with Vlogit, making a video with music & effects is extremely and relatively very easy. It is seamlessly easy to upload your creations to YouTube, Instagram or other social media sites directly from the app! Wait…I just thought to also let you know that you could even create a custom YouTube thumbnail to upload with your video in Vlogit. Sounds cool? Then go download & try it out NOW!

Apart from being my favorite Android video editor, the filmora Go video editor is highly recommended because of its features.
It is for this reason that the Filmora Go app occupies the first position in this list. 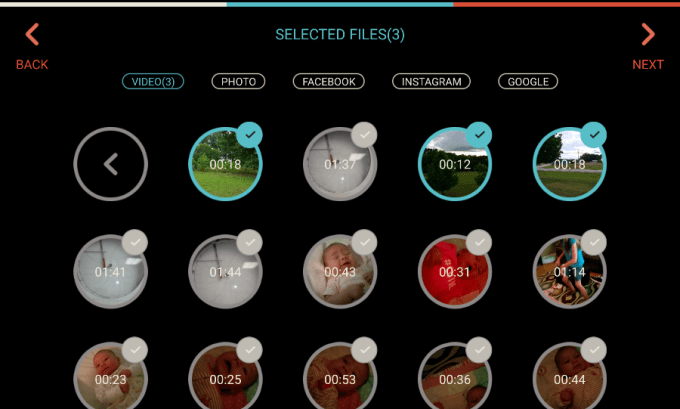 The Filmora Go app, like every mobile video editor gives you the ability to cut/ trim videos, add text, apply background music e.t.c
Setting itself apart, The Filmora Go video editor allows you to render videos with ratios of 1:1 for Instagram videos and 16:9 for YouTube videos.

The Filmora Go video editor gives you the ability to play videos in reverse, it supports slow motion edit, an addition of background music.

The Action Director video editor sets itself apart, with the fact that it’s among one of the few Android mobile video editors that support 4k resolution clips.
Editing 4k clips on the app are actually hinged on the possibility of your smartphone supporting it. 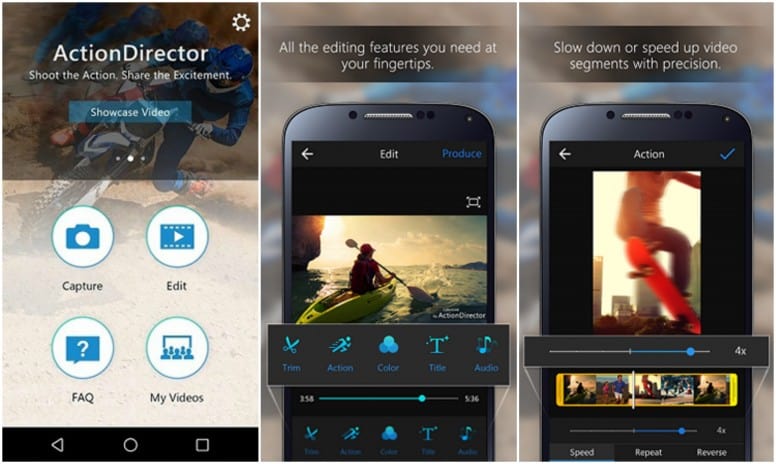 The Action Director video editor is available for both conventional computer and Android smartphones.

Now, based on my personal research and findings, these are the 7 Best Video Editors for Android Apps in 2018, and you will be doing yourself a lot of disservices if you decide to look past this list without making a pick today.

Now over to you!

If you think I miss out on any of the best video editor apps for Android, please do not hesitate to give me a heads up via the comment section o this blog. I always hide somewhere to read and respond to comments almost immediately! 😀 You can also click here to check out our latest Tech Guides. By the way, I already published on this blog Top 5 Best Resume Apps for Android in 2018. Go read it NOW!