How To Choose The Right Charger For Your Gadgets

You’ve at one time or the other been in a situation where you forgot you device’s (tablet, smartphone, wearable tech, laptop…) charger at home miles away, probably frustrated, you walk up to an electronic outlet and grab a cheap charger that fits into your device’s port not considering the ratings (assuming after all, modern chargers and smartphones use 5v), and you end up charging your smartphone for 5 hours without attaining maximum charge, something that normally took 2 hours to juice up your device with your OEM’s charger. 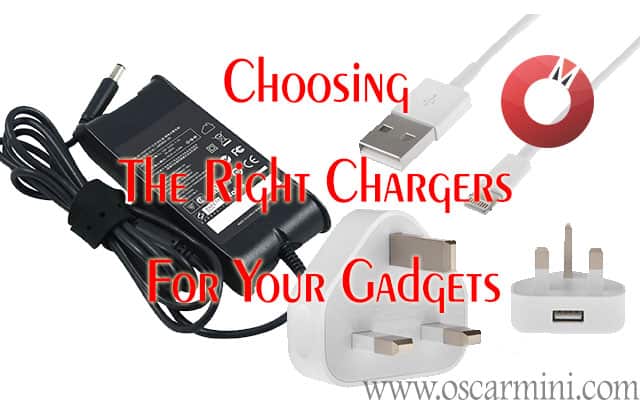 Yes all chargers are not created equal. Some would charge your device faster while others take like forever to charge your device and all these are based on some simple principles I’ll be making you understand in further paragraphs.

A Little Background on Charging

Based on high school physics we know that power is the product of Voltage and Current, i.e, P=IV. Where I represents Current and V represents Voltage. Taking mobile phones into focus, there is a standard that Voltage is usually 5Volts, while current varies.

Thus if a charge gives out 5V and 1A (Current), the power produced is therefore the product of 5×1, which becomes 5W. If another charger gives 5V and 2A, the power therefore becomes 5×2, which is 10A. The higher the power, the faster the charge rate and this is all based on the Current in Ampere the  charger gives out.

How To Choose A Faster Charger

Enough of the whole electrical jargons explained above. To get a faster charger for any of your devices, you have to get a charger with same Voltage output but a higher Current (in Amperes). For instance, if you use a 5v 1A charger, a charger with 5v 2A would charge pretty much faster.

Forget the myth that says a higher ampere would kill your battery’s life span. It only ends up charging you device faster.

If you buy a charger that has a lower current rating as compared to your OEM’s charger, you end up spending more time to charge your device and in some cases, the excessive demand for power by your device might burn the low specced charger.

Now you know some things to consider while choosing a charger for your Laptops, smartphones, Tablets and gadgets in general, why not let us know other tips we might not have included here.