How Do I Enable LTE Cellular Service On My Apple Watch?

By David Folami4 Mins Read
Share
Facebook Twitter LinkedIn WhatsApp Pinterest Email
Do you want to drop your iPhone at home and still monitor your iMessages, phone calls, and other important notifications? Well, it is now possible, just make sure you have the right Apple Watch. Some Apple Watch models can connect though 4G LTE, aiding you to stroll out without having to take your mobile device with you. In this article, you will learn how to enable LTE cellular service on your Apple Watch.

Thus far, 3 models of the Apple Watch support this feature. They are:

These models are more expensive than the base models that only support Wi-Fi and GPS connectivity. On top of that, you will need to part with a monthly fee to your carrier to make use of the LTE connectivity. 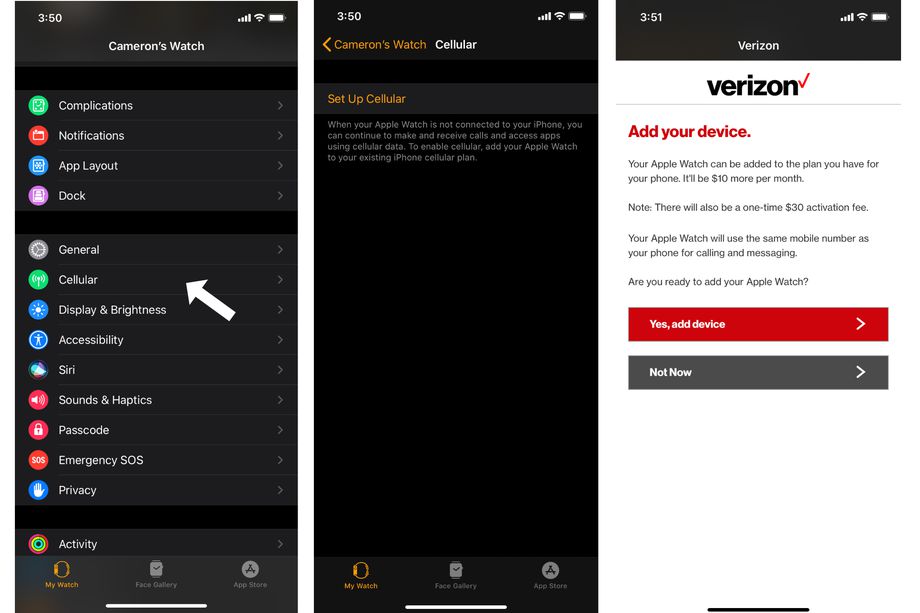 How Can I Activate My Apple Watch On An LTE Network?

Before anything else, you need to launch the Watch app on your iPhone; this is where everything about your smartwatch can be managed. Swipe down and click “Cellular” and then click “Set up Cellular.”

What will be visible next, and the amount you will part with will depend on your carrier. Your carrier is dependent on the model of your Watch. As per a report from Apple, your smartphone and Apple Watch must be from one carrier, however, the Apple Watch supports about 5 cellular plans, therefore you are allowed to switch carriers when you want.

Must Read: Do You Even Need A Smartwatch

As soon as you have successfully added the Apple Watch to your mobile plan, the cellular function can be switched on or off by scrolling upward on the home screen of the Apple Watch, then clicking the top left option that resembles a radio tower. It will be green in color when cellular is enabled, which will indicate that you are allowed to leave your mobile device at home without the fear of missing out on any notification.

More Information About Your Apple Watch

The Apple Watch is a line of smartwatches designed, developed, marketed and sold by Apple Inc. It incorporates fitness tracking and health-oriented capabilities with integration with iOS and other Apple products and services.

The Apple Watch was released on April 24, 2015, and quickly became the best-selling wearable device: 4.2 million were sold in the second quarter of fiscal 2015.

The goal of the Apple Watch was to complement an iPhone and add some new functions. Kevin Lynch was hired by Apple to make wearable technology for the wrist. He said: “People are carrying their phones with them and looking at the screen so much.

People want that level of engagement. But how do we provide it in a way that’s a little more human, a little more in the moment when you’re with somebody?” Apple’s development process was held under wraps until a Wired article revealed how some internal design decisions were made.

The Apple Watch is available in multiple variants, generally distinguished by the material, color, and size of the casing, with special bands and watch faces available for certain variants co-branded with Nike and Hermès, which are also sometimes accompanied by other unique extras, like stainless steel charging pucks, premium packaging, and exclusive color basic bands.

There you have it – a comprehensive tutorial on how to enable LTE cellular service on your Apple Watch,