It’s less than 24 hours for the iPhone 5 to be launched and now alleged photos of an iPad Mini has emerged on the internet. It is claimed that this would be the next tablet to be released by Apple company.

Here is the image. 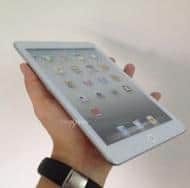 Let’s await the launch of the iPhone 5 by tomorrow.