Here is a detailed review of the recently announced and launched iPhone XS Max. One of the best smartphones out there in the market and obviously the best iPhone to date (the time of this review). 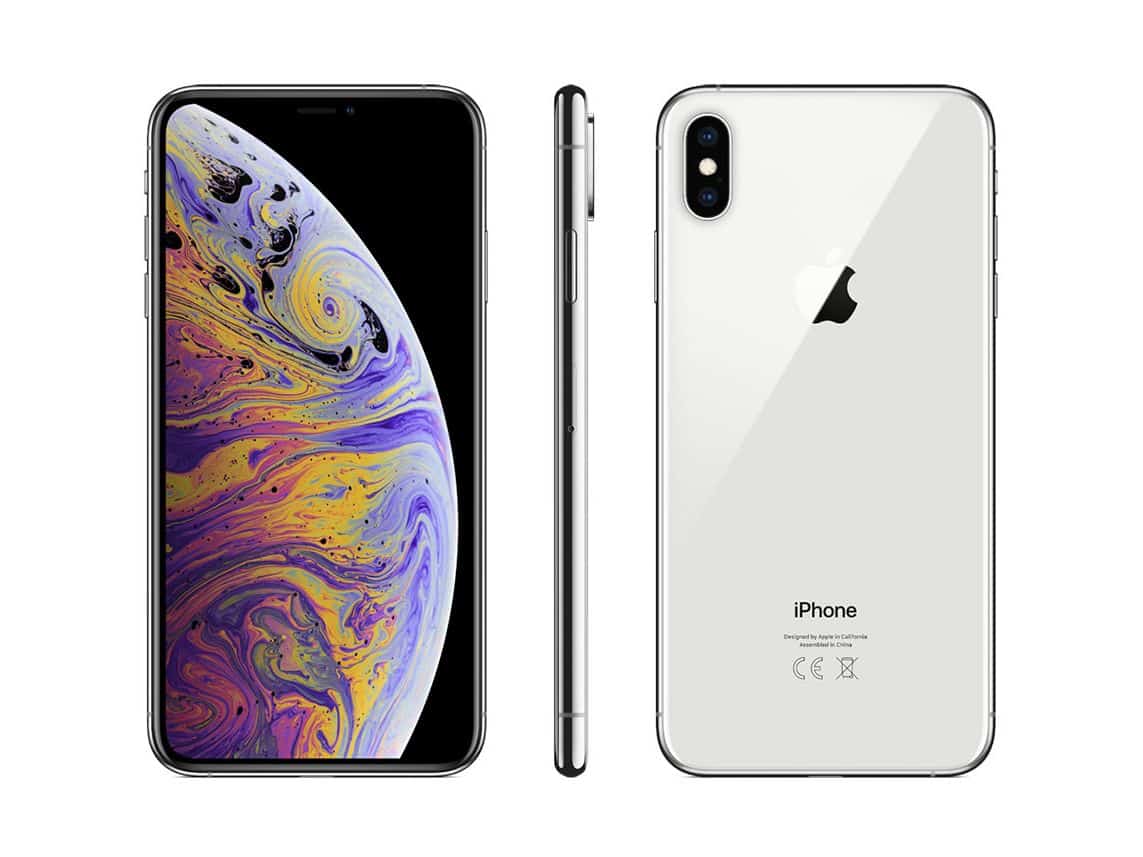 The iPhone XS Max which is correctly pronounced as the ‘iPhone Ten S Max’ was announced in September 2018 and is known to be the biggest smartphone that Apple has ever produced. The device comes With a 6.5-inch all OLED display and, scarcely any screen bezel and the current iconic screen notch it’s also a dominating presence in the hand.

The iPhone XS Max also dominates the pocket, and this includes size and price. Although the iPhone XS Max is the biggest of it’s kind, it is also the most expensive iPhone till date, with Apple dishing out a device with a screen size that is seriously competing for the most premium of Android flagships.

Apple finally decided to take the screen game a little bit further by manufacturing a device with a supersize display, which makes the iPhone XS Max the first generation of the new and larger form factor.

The iPhone XS Max houses more screen for video and gaming on the move and runs on the latest version of the iOS 12 developer beta as a baseline.

We compared the iPhone XS Max to a whole lot of other phones during our review, and we come t notice that the iPhone XS Mas was quite thicker and less planted in the hand than the rest of them; despite being thinner than all of those phones. So, you see the design is quite deceptive.

One of the amazing things about this device is that it manages to squeeze a whole 6.5-inch display into a body that’s a touch narrower and shorter (at 157.5 x 77.4mm), which is less than an iPhone 8 Plus, that only houses a 5.5-inch display.

The device is covered with a steel frame around the outer part and the new invented glass on the front and back, which is a lot tougher than the glass found on the iPhone X, and this happens to give the iPhone XS Max a supremely premium feel and look.

The iPhone XS Max resistance to dust and water has been upgraded, instead of the 3 feet depth submerging like the iPhone X, it can now go as deep as 6 feet and can survive it for 30 minutes without suffering any ill effects. According to Apple, the device’s dust and water protection have been tested in a number of liquids which includes, salt water, milk, chlorinated water, wine, and beer.

Talking about ports, this device does not have any headphone jack on it. You have a centralized Lightning port alongside speaker and microphone holes on the base of the iPhone XS Max. It comes with a pair of Apple EarPods that has a lightning connector in the box, and the current design does not let you plug in your Apple EarPods and the charger at the same time. But, fortunately enough, the iPhone XS Max also allows a wireless charging, this means you can still be charging while listening to a music.

Located at the right side of the device is the power/lock key and it’s a lot easier to tap on the button with your thumb or forefinger, meanwhile, the volume keys are located below the physical mute switch on the left of the handset. The SIM card tray is still located in the same position. But, there’s a new feature introduced, the device is now dual SIM enabled, coupled with an eSIM embedded inside the device.

The Apple iPhone XS Max camera is similar to the XS, it has a dual-12MP camera at the back and a 7MP camera at the front for a selfie coupled with 2688?by-1242?pixel resolution at 458 ppi. It also has a quad-LED dual-tone flash coupled with a scratch-resistant sapphire glass that helps keep the device away from harm. 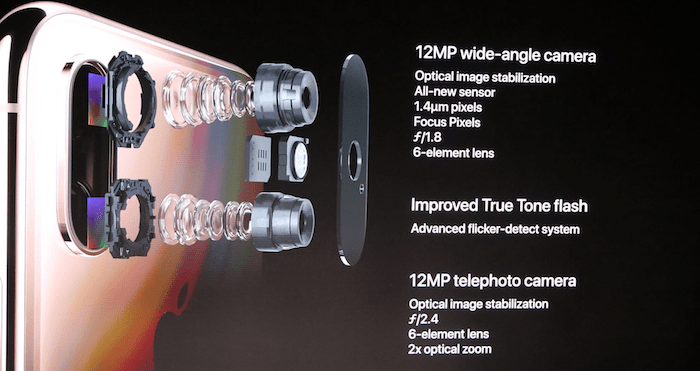 The main 12MP sensor located behind a f/1.8 lens, while just like on the iPhone X, the telephoto behind a f/2.4 lens, both optically stabilized. The iPhone XS Max main camera offers an equivalent field view of 26mm lens (in 35mm camera terms).

The device camera has a new Smart HDR feature which blesses the camera with a new image signal processor with 4-frame buffer for zero shutter lag. Coupled with the 4 frames, the camera captures interframes, together with a long exposure, all of which are summed up into a single photo that has an improved dynamic range.

The XS Max camera features another improvement, and that is the stereo recording for the video capture. It is not the regular stereo audio, this one employs wider sound separation for a richer sound and a better listening experience. Probably what Apple calls wide stereo.

Most times a lot of people believe that Apple is exaggerating most of their items because there’s always lots of unnecessary swooning over it. The statement is partially true considering those who have totally fallen for the Apple’s ecosystem. Nevertheless, there’s actually little that has been exaggerated about its performance.

Within this device is an A12 Bionic chip which is Apple’s new innovation. There is a lot of amazing pieces of stuff packed in the A12 Bionic and this is what gives the real boost to the iPhone XS Max. The A12 Bionic chip is a 64-bit SoC chip which has six cores; Two of these performance cores produce 15 percent extra power. while the remaining four cores are dedicated to efficiency which was claimed to use up to less than 50 percent.

There is yet another four-core GPU designed for graphic-heavy apps.  When compared to any top line up Android phone, the iPhone XS Max delivers superior performance.

According to Apple, the Neural Engine was made much more powerful in its A12 Bionic chip. And the neural engine has eight cores, which Apple claim is 9 times faster than the iPhone X. The A11 Bionic chip used on iPhone X had only two cores in its neural engine.

The iPhone XS Max is very fast, efficient and extremely capable of carrying out any task throw at it and this is made possible as a result of the combination of the much-improved iOS 12 with the iPhone XS Max processor.

The iPhone XS Max house a 3,174mAh battery capacity, which is a lot larger than the 2,691mAh inside the iPhone 8 Plus, and this makes it technically the biggest battery Apple has ever used on a phone.

Apple claims that the battery offers an additional 1 hour 30 minutes extra time over the iPhone X. We don’t actually know how Apple arrived at that particular figure, but the iPhone XS Max can carry you through the day on a single charge with moderate to high usage.

Nevertheless, if you’re the kind who doesn’t run many activities at the same time on your device, then you can go for the iPhone XR, which also has a big screen and a lower budget. It may likely be more suited for your usage pattern.

The iPhone XS Max battery keeps you going all through the day even with intensive activities like streaming videos and playing games.

You can also use the Wireless charging to conveniently top up your iPhone XS Max, but you will need to purchase this separately. It was rumored that the fast-charging block will be added to the new iPhone XS inbox but didn’t actually happened.

Apple iPhone XS Max is an exciting new addition to the ‘X’ family, and one of the reasons is its exciting hug screen the device offers, which makes it even a more perfect device for fans who enjoy movie-watching, game-playing and a lot of other kinds of stuff that you can only enjoy on a device with a large display. Though the device is sure expensive, yet it offers you a super, supersized experience, which most fans don’t mind paying double of the current price for. So, if you are the type who enjoys gaming and movie-watching, then the iPhone XS Max is the perfect device for you.