If you are looking for a minimally fast smartphone device, Doogee just introduced their 3.5-inch device call the Doogee Titans DG150, the device has an MTK6572W Cortex-A7 Dual-core 1.0GHz processor and It supports Android 4.2 operating system. 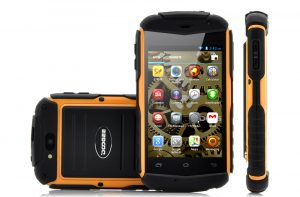 Designed with Plastic. It comes in White, Black color variants, We can not say that the materials used are a strong point of this phone. But we will have to sacrifice this aspect if we chose it, this device has a size of 66.9 x 122.8 x 15.86 mm, this device comes with a water and dust proof, the device weighs 133g. this device thick nature makes its users not so comfortable handling it.

runs on Android 4.2.2 jelly bean, its CPU runs on MTK6572W, Cortex A7 dual core, 1.0GHz making the device quite fast, 512mb and 4GB RAM and ROM respectively, with an available memory of 2.5g. Doogee Titans DG150 adopts 1500 mah not quite a large capacity battery but for this device it is manageable.

Doogee Titans DG150 comes with Dual Cameras, front camera 1.3MP; back camera 2.0MP with LED flash which is quite poor, very poor I must say.864 x 480 video recording resolution. so if you a picture lover this might not be the best device for you.

Although its size is not common among the last generation phones, many users are comfortable with moving these sizes and are not willing to make the jump to the “next dimension”,”It is thick,” the manufacturer does not work that aspect and an average user is not comfortable with the phone in his hands. Keep this in mind when choosing it.