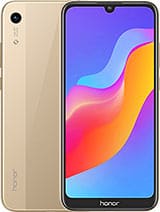 Despite being a budget smartphone, the Honor Play 8A still ships in with all the basic features that you can find on any smartphone. Come with me, so we can go round the smartphone.

The Honor Play 8A is one of the budget-friendly smartphones currently in the market that comes in with a very large screen. The Honor Play 8A houses a large 6.09-inch drop screen design, which occupies 87% of the front panel.

But despite having such a screen, you will still find that Honor still able to incorporate the single selfie camera, light sensor, earpiece, and status indicator. The screen also features an eye-protection technology, with TUV Rheinland certification that helps reduce those harmful blue light that the screen produces that are harmful to the eyes.

The screen of the Honor Play 8A has a resolution of 720 x 1560 pixels which result in a 19.5:9 ratio (~283 ppi density). The screen is finely fitted into the well-rounded edges smartphone.

On the right-hand side, there is the volume rocker seated by the side of the power button. Meanwhile, on the back side of the device, there is a single camera sensor with a powerful LED flash beneath it. We weren’t able to find any fingerprint sensor in the smartphone.

The smartphone comes in with four color options which consist of the Black color option, the Blue, the Gold, and finally, the Red.

The Honor Play 8A comes in with a total number of two cameras, as opposed to recent smartphones that usually comes with a minimum of three cameras, usually two at the back and a selfie camera.

The secondary camera which is the selfie camera comes in with an 8 MegaPixel sensor with an f/2.0 aperture. The camera features an HDR and is capable of recording videos of [email protected]

Meanwhile, the back side of the device is blessed with a single primary camera sensor that comprises of a 13 MegaPixel and comes along with an f/1.8 aperture and PDAF. The primary camera is accompanied by a powerful LED flash that ensures a neat photo even in low-light conditions. And Just like the selfie camera, the primary camera also records videos of [email protected] and comes in with features such as HDR, panorama.

Despite being a very cheap smartphone, when it comes to performance, the Honor Play 8A cannot be intimidated.

First of all, the smartphone runs on the latest Operating system, Android 9.0 (Pie); with the company EMUI 9.

Under the hood, the smartphone is powered by MediaTek MT6765 Helio P35 which uses a 12nm process technology and has a total number of eight cores which clocks at 2.3GHz. For the graphics, we have the IMG GE8320 680MHz.

The Honor Play 8A comes in with a 3GB RAM and we believe that can handle the multi-tasking purposes. For the storage you have the 32/64 GB which if you think is not enough for all your storage purposes can further expand up to 512 GB using the dedicated microSD slot.

We were able to test the battery life of the smartphone and the result was okay. We streamed videos online when it was 97% and we were able to stream online videos for almost 10 straight hours.

Like we have been mentioning from the beginning of this review, the smartphone is one of the cheapest smartphones to come in with a very large screen.

The smartphone is sold for 799 yuan which is equivalent to $118 / N42,362 naira. You can also purchase this device from most online stores.

Should in case your budget is tight or you probably don’t have enough cash on you and you still want to use a nice smartphone that is able to tick all the basic smartphone boxes, then we think you should first consider the Honor Play 8A.

The Honor was able to offer not just a low-price tag smartphone, but one that can still confidently substitute some high-end smartphones. The new device comes in with other surprises that seems to be too much for a smartphone of such price range.

The Honor Play 8A comes in with a nice performance, good design, good RAM size, nice battery life and other features that make a phone called smart.