Here comes a new member of the Huawei’s family, his name is, Huawei Honor 10i. The new smartphone is among the best budget smartphones with a large RAM you can possibly see currently in the market. 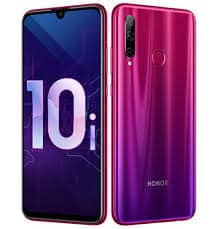 I have already mentioned that the Honor 10i has similar looks with last year Honor 10 Lite. It comes in with a simple but eye-catching kind of design. On the back of the smartphone, you will find the triple camera set up which is accompanied by the powerful LED flash and they are all seated on the smooth panel.

Still, on the back of the Honor 10i, you will find the responsive fingerprint sensor which you can use to increase the security of your smartphone. On the front view, you will find the waterdrop notch which houses the selfie camera and other sensors abode.

The smartphone also comes in with a large 6.21 inches FHD+ and a resolution of about 2340 x 1080 Pixels causing a 415 PPI density. The smartphone uses the IPS, LCD Capacitive touchscreen for protection. The smartphone was able to achieve an 83.31% screen to body ratio. The smartphone arrives in three different color options which consist of the Black, Blue, and Red colors.

The Honor 10i comes in with a total of four different cameras, three on the back side, while a single camera sensor on the front side for selfies.

The primary camera on the back consist of a 24-megapixel shooter which has an f/1.8 aperture, there is the 8-megapixel secondary sensor and the 2-megapixel shooter with an ultra-wide-angle lens. The camera also has a powerful LED flash which aids the camera to produce clearer images, especially in low-light conditions.

Like I mentioned earlier, the water-drop notch display holds the selfie camera which is a 32-megapixel AI-powered shooter, and also comes with the Face Unlock feature and many more.

Inside the Honor 10i is seated a powerful Huawei HiSilicon Kirin 710 chipset with an octa-core processor which runs a 2.2 GHz. It also features ARM Mali-G51 MP4 4 Cores dedicated for handling graphics.

Like I earlier mentioned, the smartphone features enough RAM that will ensure a lag-free experience. Under the hood, the smartphone has a 4GB RAM with internal storage of 128GB. If you feel the storage provided is not good enough for you, then you can expand it further up to 512GB using the micro SD card.

Powering the Huawei Honor 10i is a moderate 3,400mAh battery capacity, which will ensure extended battery life.

But should in case you are not comfortable with it or you are a heavy user, then you have the Fast battery charging 5V/2A 10W, which you can use in quickly adding an extra battery juice to your smartphone.

Huawei has not yet officially released the price of the Huawei Honor 10i, but from rumors and leaks shows that the will be sold for about RUB 19,990, which is equivalent to €274 / $310.

If you actually read the review carefully, you will find out that the Huawei Honor 10i, comes in with all the necessary specifications and features that are found in the current flagship. The smartphone comes in with a nice process, 4GB RAM, moderate battery, Large screen, fingerprint sensor, Face unlocking feature, amazing cameras, and a host of other interesting features that are scarcely seen on other smartphones of its class. It is a nice smartphone if you ask me.