Huawei has decided to add another smartphone called the Huawei P30 Lite to their already existing two flagship smartphones, the P30, and P30 Pro. The new member of the P-series is a mid-range smartphone which comes in with a premium look, bigger storage option, triple primary cameras, and other interesting features. 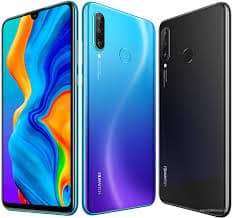 Without any further delays, I would like to take you through the newly released Huawei P30 Lite so you can see things for yourself.

The Huawei P30 Lite features premium design and it is built with glass both back and front, while the frames are made of aluminum. The smartphone has a well-rounded edge which makes the smartphone to sit comfortably in your palms.

The back of the smartphone houses the fingerprint sensor which seats a little bit above the center. Meanwhile, you will find the triple camera sensors which seat on a protruding camera bump. The glass back retains smudges and retains fingerprint requiring one to continuously wipe the back.

Turn the phone to the right-hand side and you will find the volume rockers and the power button. The bottom of the smartphone houses a single firing mono speaker, a modern USB-C port, and the 3.5mm jack.

When you turn to the front side of the Huawei P30 Lite, there is seated a 6.15-inch full-HD LCD display which boasts of an 84.2% screen-to-body ratio. The front also features well-trimmed bezels on the two sides, while at the bottom you will find a bit of a chin. The display of the smartphone is very impressive and produces clear images.

The Huawei P30 Lite arrives in different stunning colors which are total three in number consisting of the Peacock Blue, Pearl White, and Midnight Black.

On the back of the Huawei P30 Lite, there is three camera setup which consists of a 24-MegaPixel main camera sensor which captures a lot of details and is assisted by the remaining two which also consist of a 2-MegaPixel depth sensor for bokeh effects and the 8-MegaPixel ultra-wide sensor which helps cover more scenery.

Selfie lovers are not left behind in the photography business. On the front side of the smartphone, there is a single camera sensor which is housed in a very small notch and consist of a whopping 32-MegaPixel camera sensor. Just like the main primary camera, the selfie camera can also capture a clear image with a reasonable amount of details.

It comes in with awesome features such as the AI beautification which allows for quick selfies. It also comes with other features like image recognition, AI effects, AI scene recognition, and others. The primary camera comes with a LED flash, while the selfie camera doesn’t.

When it comes to performance, the Huawei P30 offers quite an impressive performance. It is only on the hardware that the smartphone shows its budget nature.

The smartphone uses the Hisilicon Kirin 710 (12 nm), which can be seen in other smartphones like the Honor 10 Lite and Honor 8x. Though the smartphone can smoothly meet up with the day to day usage but don’t expect it to still perform the same way when you play power demanding games or apps, you should expect few hiccups.

The smartphone also uses the Octa-core (4×2.2 GHz Cortex-A73 & 4×1.7 GHz Cortex-A53) CPU, while for the graphics performance, there is the Mali-G51 MP4. You will also find a 128 GB internal storage for all your storage purposes and a 6GB RAM that will ensure smooth multitasking.

If the 128 GB internal storage wouldn’t be enough for your storage purposes, then you can further expand it up to up to 512 GB (SIM 2 slot) via a microSD card.

The Huawei P30 Lite runs on the Android 9.0 (Pie) alongside with Huawei’s EMUI 9 skin. There are lots of features that it arrives with that make using the smartphone a lot easier such as the gesture support, battery optimization, performance, and a neater settings menu.

There is a moderate battery powering the Huawei P30 Lite and though it may not be up to what most budget smartphone offers, the battery could still carry you through the day with moderate use which includes scrolling through social media, streaming videos and more.

The Huawei P30 Lite is a Mid-range smartphone which comes in with a price tag for those who don’t have much to spend on a smartphone. The budget smartphone has a starting price tag of about $327 which is equivalent to 290 Euro / PHP 16,990.
You can buy the smartphone from some online stores or most offline stores, and the prices may slightly differ as it is controlled by geography and bargain.

The newly released Huawei smartphone, the P30 Lite didn’t completely incorporate those interesting specifications and features that would have better qualified the smartphone to go head to head with its higher-end siblings, though the smartphone was able to still offer high-end design and other high-end specs like the triple primary camera and more. The mid-range smartphone also comes in with a moderate battery.