Huawei is out with another smartphone which happens their latest release and it is called the Huawei Y7 Pro (2019) which will be joining the list of other budget smartphones in Huawei Y-series. 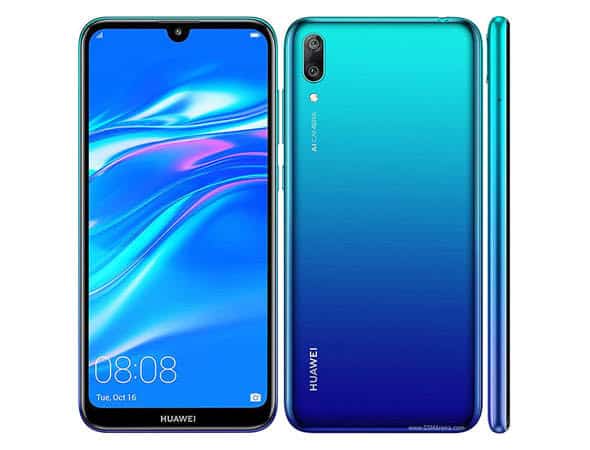 The new smartphone was announced and released in January 2019 and it arrives with a simple spec sheet. The smartphone comes in with specifications and features that are interesting like the Large battery life, the dewdrop notch which Huawei has been featuring in their latest release.

Don’t think everything is rosy with the newly released smartphone because the smartphone also missed out in some of the trending specs we had expected to see it arrive with; just like the missing rear fingerprint sensor.

The new smartphone is made of a glossy polycarbonate back panel which also gives it a premium feel and look. The smartphone also features a slim bezel on all the sides of the smartphone apart from the one at the bottom where you find the Huawei logo.

On the front of the new device, you will find the dewdrop notch where the selfie camera is seated and above it is where the LED flash and earpiece are seated. Meanwhile on the left hand is where the dedicated microSD card slots and SIM card tray is located.

The volume rocker and the power button is on the right side of the smartphone and there is the 3.5mm audio port. On the back of the smartphone, you will find the dual camera setup and a LED flash.

The smartphone didn’t arrive with the fingerprint sensor, and sadly you have just the Face ID unlock feature. The smartphone comes in two different color options which are the Black, and Aurora.

We earlier mentioned that the Huawei featured a large screen which consists of a 6.26-inch 19:9 HD+display. The screen also features a resolution of 1520 x 720 Pixel and though seems to have a low resolution, nevertheless, it will still be great for watching movies and other activities that you enjoy more on a large display.

The dual primary cameras consist of a 13-MegaPixel + 2-MegaPixel sensors and it produces decent images with enough detail. There is also the LED flash which illuminates its subject in order to produce clear images.\

The Y7 Pro 2019 features the Qualcomm Snapdragon 450 chipset which is in charge of performance. The smartphone also features a 3GB RAM and the Adreno 506 GPU for graphics.

The Face Unlock was relatively responsive and fast and the smartphone can perform simple tasks like surfing the web, media posting, file transfer video streaming, and others with ease. But, there are certain games like Tekken 7 and Asphalt Legends 9 usually have low frame rates when playing them and this is because of the intense graphics

For all your storage purposes, you are presented with a32 GB internal storage which if you feel is not enough for your files, then you can further increase up to 512 GB using microSD (uses SIM 2 slot).

The Y7 Pro 2019 arrives with Network and connectivity which comprises of the Dual-SIM 4G LTE, Bluetooth, WiFi, and GPS. For calls, you get a loud, clear and overall good performance, though we were disappointed not to find any Gyroscope sensor, meaning it will be impossible to play AR games.

The Huawei Y7 Pro (2019) is powered by a powerful 4000mAh battery which is great considering the segment it falls under. While using the smartphone, I was able to coin out roughly 14 hours of intensive use from the smartphone.

While using to watch videos, it lasted for about 17 hours, though we set sounds at 50%, brightness at 50% and it was able to achieve the stated number of hours. This simply indicates that the battery life is okay.

We earlier mentioned that the Huawei Y7 Pro (2019) is a budget smartphone, therefore, comes in with a low price tag about $180 which is equivalent to NGN:65, 000 Naira depending on your deal and location.

From the beginning of the review, we made it known that the Huawei Y7 Pro 2019 was the combination of both the bad and good component and we mentioned some of the good and bad stuff which the smartphone comes in with.

Some of the bad stuff includes 720pixel display resolution, lack of fingerprint sensor, lack of Gyroscope sensor among others, while some of the good component the smartphone ships in with consist of the decent 3GB RAM and Snapdragon 450 chipset, good selfie camera, good battery life among others. But, overall, the smartphone is good to go considering the price at which the smartphone brings in.