Infinix mobile is here with another budget entry smartphone and it is tagged Surf Spice X403 and it has much to offer as a better performance and a decent battery capacity. Infinix Surf Spice is an Android smartphone running on Jelly Bean version of Android with a 4? display and screen resolution and dimension.

Let look at the features which this device has a stack for us. 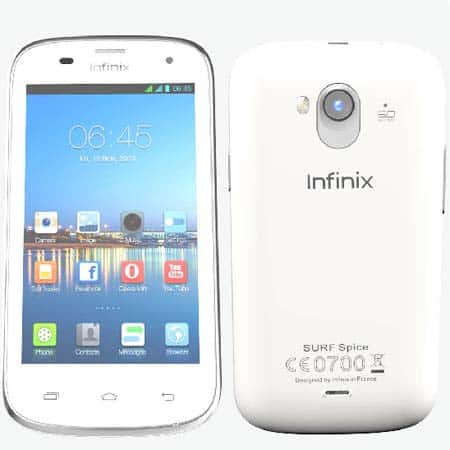 The Infinix Surf Spice X403 comes with a 4-inches display screen with a resolution of 480×800 pixels. It is powered by a 1.3GHz dual-core processor running on Android 4.2.2. and offers 512MB of RAM like most entry-level Android smartphones. Spice is beautifully designed with fast internet access over 3G and Wi-Fi. The device is also a dual sim device.

This smartphone has a rear 5-megapixel camera with flash that lets you capture an object easily. Its front sensor has a resolution of 2 megapixels and is ideal for portraits and video conference call.

Infinix has always been considerate in producing their smartphone. in this time budget device, I feel much should have been added to this device, But it will look like asking for everything in a cheap priced device. The Ram should have been better for better performance. But the camera is good to produce nice shoots and videos.