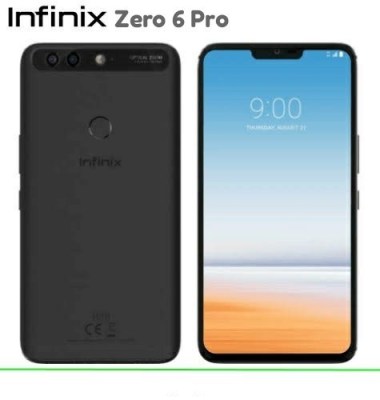 The smartphone was announced in March 2019 and they both come in with interesting specifications, though we will only be paying attention to the Infinix Zero 6 Pro.

The smartphone uses a 6.2-inch, IPS LCD capacitive touchscreen with a resolution of 2160×1080pixels and also employs the gorilla glass screen for protection. Still, on the front side of this smartphone, you will find the single selfie camera sensor seated close to the LED flash all housed in the notch. The notch also contains the earpiece, light sensor, and other sensors.

On the back of the smartphone, nothing has really changed, you still have the rear fingerprint sensor which is seated a little bit above the center. Meanwhile, you will find the dual camera set up by the upper left-hand side with the powerful LED flash resting below it.

The other specifications of the smartphone like the 3.5mm jack, the loudspeaker, volume rockers, power button and the rest of them still retain their ancestral positions. The smartphone arrives in two color configuration, the Sapphire Cyan, and Milan Black color option.

On the front side of the Infinix Zero 6 Pro, you will find the selfie camera comfortably seated on the notch. The selfie camera is composed of a 20-megapixel sensor and just like the primary camera the selfie camera also has its own LED flash for clearer images even in a low light condition.

The company while unveiling the smartphone made us know that the cameras are all AI-enhanced which can carry out many functions like AI-portrait, AI-scene recognition, and many more.

The Infinix Zero 6 Pro is powered by the Snapdragon 660 chip from Qualcomm. The chipset also comes with the Octa-core processor with 64-bit CPU architecture. The processing speed of the chipset clocks at 2.2GHz with 14nm process technology. There is also the Adreno 512 which handles the graphics performances.

Just like the Zero 6, the Infinix Zero 6 Pro comes in with a huge 6GB RAM which will ensure you do not experience any lag in multi-tasking and others. The RAM speed is clocked at over 1GHz.

The Infinix Zero 6 Pro uses the outdated software just like Zero 6, the new smartphone runs on Android 8.1 Oreo alongside the company’s XOS 3.0 Hummingbird.

The battery is also blessed up with a fast charging technology which is capable of offering you full 100% extra battery juice under 2 hours. The battery also offers you up to 24 hours for talk time and up to 380 hours standby mode, while for music play, you have up to 30 hours.

I really may not know the exact specification or feature you are looking out in a smartphone, but one thing I can confidently tell you is, the Infinix Zero 6 Pro ticks all the basic boxes in a smartphone.

The smartphone comes in with huge battery life, amazing cameras, large display, 6GB RAM and many other specifications and features that you will need for your everyday smartphone usage. The all-around performance of the smartphone is simply awesome.