If your a fan of big devices, and you don’t mind carrying large devices, then InnJoo T1 is one device you should consider, Innjoo T1 has a 7-inch display with 600 x 1024 pixels resolution, it is also built with 1GB RAM, and runs on Android 4.4 (KitKat).

these one device multimedia lovers are going to find interesting, with a nice processor, large screen, this would give gamers a whole new experience. 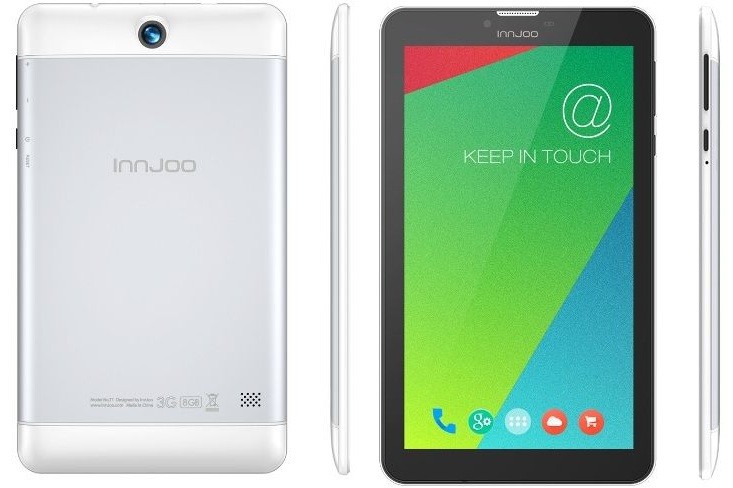 Designed with Plastic. It comes in White, Black color variants, InnJoo T1 is built with a 7-inch screen in front with 600  x  1024 pixels resolution its also has a camera for selfies,the device is made with steel at the back,the back of the device is  also equipped with a camera , and at the bottom end a speaker, the device is built with two buttons by the right, for volume regulation and the power button.

The InnJoo T1 tablet device  comes with the 1GB of RAM, and 8GB ROM,  Along with the Dual Sim card slot, this device also comes with the 4.4  Android OS, the device is powered by a 1.3GHz quad-core Cortex-A7 CPU, MediaTek MT6582M chipset, and Mali-400MP2 GPU

The InnJoo T1 tablet device comes with a battery sized of 3000mAh, which it would be okay for a device with the kind of spec this device has.

The camera of this device is actually not the strongest point of this device,The device is built with a 5MP Back Camera, which is poor, for a device like this, the device also comes with a 0.3MP front camera,so if your a selfie lover this device might be the kind of device you would want to have.

so you love a big device, with a large screen, that you can use to enjoy games, movies, and other multimedia activities then this device is one you would like to have, with an average battery that could improve your experience.

But if your a picture lover then this device might no be the device you would love to own, so picture lovers should put this into consideration before the purchase of this device.