Motorola is one of the smartphone makers who has been trying so hard to meet up with the standards and demands of the current flagships. The company also has plans of launching its own foldable smartphones like Samsung and Royole FlexPai 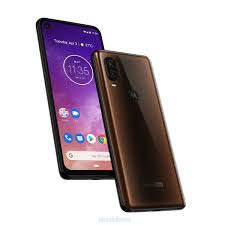 Despite having such high hopes, Motorola hasn’t yet abandoned their mid-range smartphones. The company as a matter of fact recently launched its latest smartphone with rare features which shows that the company still updates.

Some of the eye-catching features like the selfie camera which is hidden in a punch hole, a 21:9 aspect ratio, the Exynos 9609 chipset made by Samsung are some of the first-hand features the smartphone comes in with.

We have been privileged to spend some time with the smartphone, and below are all you need to know.

One of the features on the Motorola One Vision that foisted my love for the device was both the large screen and glass back. The smartphone is made of just glass (Back and front), and plastic frames.

The smartphone feels both sturdy and solid with its well-rounded ages which makes it sit properly in your palm. Despite sitting well in the palm, the smartphone is a bit heavy, weighing 180g.

We earlier mentioned about one of the selling points of the smartphone which is the large screen. The Motorola One Vision comes with a huge 6.3-inch display with a 1080 x 2520 pixels, and 21:9 ratio (~432 ppi density).

Judging by the modern standard, the bezels on the smartphone are pretty thick, as well as the chin. On the upper left corner of the screen, you will find a huge punch hole which accommodates the single selfie camera.

One of the chief selling points of the Motorola One Vision is its cameras which seem to punch more than its weight.

On the front of the Motorola One Vision, there is a punch hole which accommodates the single primary camera. The single-camera sits comfortably inside the punch hole and it comprises of a 25-MegaPixel, with an f/2.0 aperture. The camera was able to offer quite some decent pictures, just like the primary cameras.

The Motorola One Vision comes in with a decent performance and a clear user interface which makes the device quite easy to use. The smartphone arrives with the latest Operating System, the Android 9.0 Pie, though Motorola added few of their own features.

Unlike most mid-range smartphones these days which usually partner with the Qualcomm chipsets, Motorola One Vision took a different part, arriving with Samsung’s Exynos 7 Series chipset.

The chipset is actually a revision of the Exynos 9610. The Exynos 9609 chipset is also assisted by the Octa-core 2.2 GHz CPU and the Mali-G72 MP3 GPU which handles graphics.

The smartphone is presented in one RAM configuration, which is the 4 GB RAM with 128 GB internal storage. The storage can be further expanded up to 1 TB (uses shared SIM slot), should in case the internal storage is not enough for your storage purposes.

Powering the Motorola One Vision is a 3,500 mAh battery which offers quite a reasonable amount of hours due to the presence of the Cortex-A53 cores which helps reduce the energy consumption to a minimum.

To be sincere with you all, the battery of the Motorola One vision was not quite impressive. The battery performance was poor when it comes to the video playback, and web browsing as compared to many competitors in the same price range.

The smartphone arrives with the 15W TurboPower-capable charger and it was able to offer us an extra 38% in 30 minutes. Not too good and not totally bad at the same time.

The Motorola One Vision is a mid-range smartphone and it comes with a fair price tag. Under the hood, the smartphone is sold for approximately $330 which is equivalent to N120,000 Naira.

Despite being a mid-range smartphone, the Motorola One Vision still comes in with not just a nice specs sheet, but also a nice chipset and other great features that ensure the smooth day to day performance of the smartphone.

The smartphone is a good bargain considering loads of nice features like the sharp cameras and others it arrives with.