From ashes, Nokia has risen from being a smartphone only nostalgic fans love, to being a phone smartphone enthusiasts like me can conveniently recommend. In the past years, Nokia smartphones have housed the best specs, available in the smartphone world. With the release of the Nokia 9 pure view, Nokia has once again proven to be a capable brand.  In this article , we explore an in-depth review of the Nokia 9 PureView, ascertaining its pros and cons. Here you would also find info on specs and price 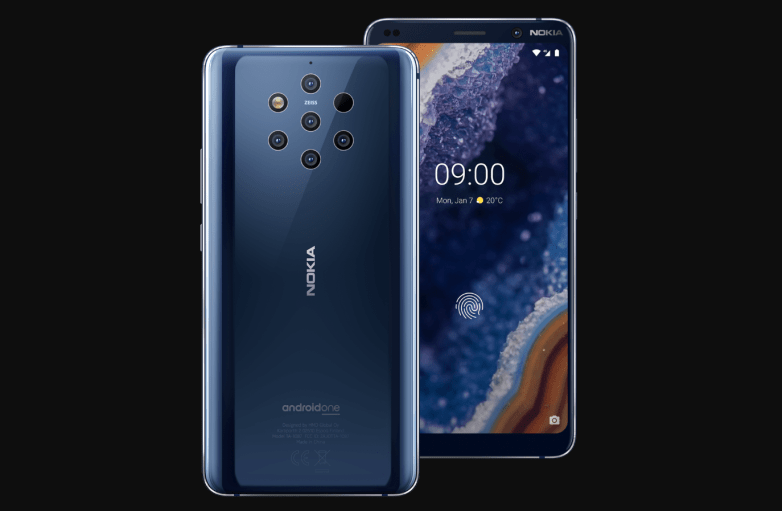 The name of the new smartphone is Nokia 9 PureView, and it is the first smartphone to ship in with five rear cameras, though it may be different from what you expect. The new smartphone was announced February 2019 and will also be released the same month, though the exact date hasn’t been specified.

Despite coming in with five cameras at the back, unfortunately, the Nokia 9 PureView doesn’t quite offer the best specs on the market, making us feel this device could be a bit of a gamble.

The question here is will the Nokia 9 PureView shutterbugs come flocking, making the camera a groundbreaking device worthy of imitation? Or will it be that the design is just a curiosity that the market is not willing to accept? Come with us let’s find out more about this smartphone.

The Nokia 9 PureView comes in with a far different look from its siblings and most smartphones. First of all, you will notice the new device doesn’t even have a notch, though it comes in with a well-trimmed bezel below and above.

The front of the Nokia 9 PureView is all occupied by a 5.99-inch QHD+ pOLED screen, with a high-resolution as almost every other flagship that is currently offered in the market. Still on the front is seated a single selfie camera.

On the back of the Nokia 9 PureView is seated one of the most outstanding features of the smartphone, the primary camera. The back houses five cameras, a powerful LED flash, and a ToF all placed in a circular setup. The ToF (time of flight) is a sensor, and the circular pattern has the same look like the blackberry logo.

Apart from the different concept the Nokia 9 PureView brings, the rest of the smartphone is like the convectionary Nokia smartphone; with all the function keys and specs maintainning their ancestral positions.

On the right side of this smartphone, you still have the volume rocker and the power/lock button, while the under holds the  USB-C port, speaker and microphone. We couldn’t find our beloved 3.5mm jack.

He Nokia 9 PureView has an IP67 rating, which offers a dust and water resistance which helps the device survive to submerge. The invention also measures 155 x 75 x 8mm and also weighs 172g. Under the screen is a fingerprint sensor that is both responsive and fast.

A little clarification up front: while the Nokia 9 PureView does indeed have five rear cameras, only two are in color. These occupy the central and bottom spots in the array, with the other three lenses – all monochrome – arranged equally around the color ones.

This orientation is precise and important, Nokia maintains, which ensures that all cameras contribute their images just so. Likewise, the five cameras are identically-specced at 12MP and f/1.8 with Zeiss optics.

That sounds low considering the escalating megapixels in phones over the last few years (with plenty of phones reaching for the 48MP camera high-water mark). But Nokia customers didn’t appreciate the massive photos and certainly didn’t enjoy the correspondingly massive file sizes.

It predicts users will be satisfied with 12MP photos, which shouldn’t take up too much space if users shoot using only one of the Nokia 9’s lenses.

Phone camera doctrine these days relies on multiple cameras, typically ranging from an ultra-wide to a main to a telephoto lens, which enables users to seamlessly zoom from way out to way in.

The Nokia 9 PureView takes a radically different approach: all five of its cameras have the same aperture and field-of-view, and when users take a photo, the entire array snaps a shot at the same time and composites them into one image. Think of it like HDR on steroids.

It’s a unique philosophy that compromises on less than you’d expect. Sure, the Nokia 9 lacks an optical zoom, but the massive (by resolution and file size) photos should let you just digitally zoom with better clarity than most other phones.

The Samsung Galaxy Fold is powered by a powerful high-end 7nm processor and packs a 12GB RAM, which makes this smartphone currently one of the most powerful in the market.

This smartphone comes in with 512GB worth of internal storage and supports UFS 3.0 (Universal Flash Storage). The UFS 3.0 lets the smartphone to read data very fast. Meanwhile, for all those who are not comfortable with the 512GB storage, we are sorry because this device doesn’t support expandable storage. So, you will have to deal with internal storage.

The Samsung Galaxy Fold runs on the latest Google Android OS, the Android 9 Pie, meanwhile Samsung also created a unique interface which makes it more compatible with the foldable screens. When you fold the screen, you can still run up to three apps on the large display all at the same time.

This smartphone also comes in with what is called App Continuity and what it does is to allow you to continue using your running apps as you fold between the large and small displays. The Samsung Galaxy Fold comes in with Microsoft Office, and WhatsApp has been specially placed in this smartphone to work with the Galaxy Fold’s 7.3-inch screen.

Powering this excellent device is a powerful 4,380mAh battery capacity in each half of the Samsung Galaxy Fold, both working together to deliver one power source.

Samsung was also able to luxuriously package the Samsung Galaxy Fold, and it also added a pair of its new wireless buds in the box.

The specifications of the Nokia 9 PureView is okay though not outstanding, that’s okay considering the price tag that its competitors arrive with. The main selling point of this smartphone is its cameras

From our point of view, we believe that Nokia produced this smartphone for those with photographers kind of personality. Another issue that you may encounter after considering whether this device is for you; is the limited edition. Nokia has limited the production, suggesting that this device is for a niche crowd.