OPPO has finally launched their much-anticipated smartphone, the Oppo A9x which is the improved version of the Oppo A9. The new smartphone was announced and launched this May 2019 in China. 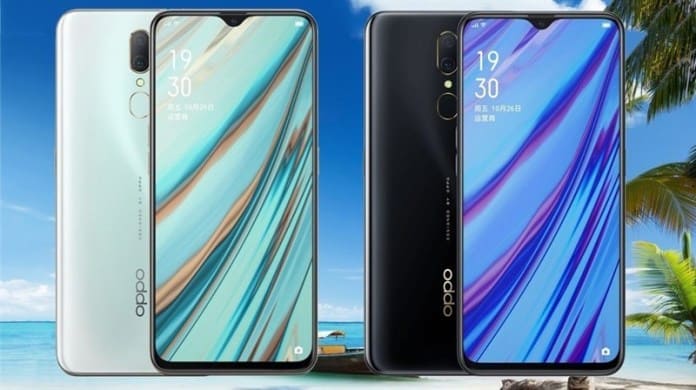 The new smartphone is coming just a month after the release of its predecessor, Oppo A9x. The upper mid-range smartphone arrives with a host of advanced features with the camera standing as its main selling point, though it comes in with other great features and specifications.

Below is a well-written review of the Oppo A9x from your number one Tech site. Hang on with us and let’s see if the new smartphone is worth investing your hard earned cash on.

The Oppo A9x offers a decent body design and a large screen that will allow you relish streaming movies from Netflix, Fzmovies, socializing on social media and doing other media activities.

The Oppo A9x was a well-thought-out smartphone and you can tell from its gradient design which seems to be prominent on the back panel. The edges of the smartphone are smoothly curved. allowing the device to fit seemly into your palm.

On the front side of the new smartphone, seats the water-drop notch comfortably seated above the 6.53 inches LTPS IPS LCD capacitive screen. The screen is protected by the fifth-gen Corning Gorilla Glass. The dewdrop notch houses the single selfie camera which offers amazing shots.

The screen has a resolution of 1080×2340 pixels and is surrounded by the well-trimmed bezels, resulting in an 84.9% screen-to-body ratio.

Turning to the front side, you will find the single selfie camera comfortably seated inside the water-drop notch. The selfie camera is a 16-megapixel sensor with an f/2.0 aperture.

The cameras on the OPPO A9x arrive with a decent number of features which includes a Dual-LED dual-tone flash, HDR, panorama, Portrait Mode, and Colorful Mode.

Behind the smooth performance of the Oppo A9X is a MediaTek Helio P70 chipset which is based on 12nm process technology. Assisting the chipset is an octa-core processor which clocks at 2.1 GHz, while the graphics are handled by the ARM Mali-G72 MP3.

The smartphone adopts and runs on the Android 9.0 Pie operating system alongside the company’s ColorOS 6 on top.

The Oppo A9X features a 6GB for smooth multitasking and others. Meanwhile, for all your storage purposes, you are presented with a 128GB internal storage which can be further expanded up to 256GB via microSD card.

There is a host of connectivity and network which comprises of the dual 4G VoLTE, Bluetooth v4.2, Wi-Fi 802.11 ac, GPS, and so much more.

Another interesting feature of the Oppo A9X is its huge battery which offers you ample of hours for your activities. Powering the device is a Non-removable Li-Po 4020 mAh battery which comes along with a 20W (VOOC 3.0) fast charging.

The Oppo A9X is a budget smartphone and therefore comes with a low price tag. You can purchase this smartphone from May 21 in China, at CNY1,999 approximately $289 and 103,000 Naira in Nigerian.

You can purchase the smartphone from some online stores or any OPPO smartphone distributor around your region.

The Oppo A9X is a nice budget smartphone which still offers a number of decent features and specifications. Some of the interesting features include a long-lasting battery with fast charging technology and great design.

The smartphone also presents bright and powerful cameras for well-detailed images and more. There are lots of reasons to purchase the Oppo A9X, therefore giving it a try will not hurt anyone.