South Korean behemoth, Samsung decided to launch another of their 2019 flagship, Samsung Galaxy A50. The company first began 2019 with the introduction of the India centric Galaxy M10 and M20, which the company believed was a great one. 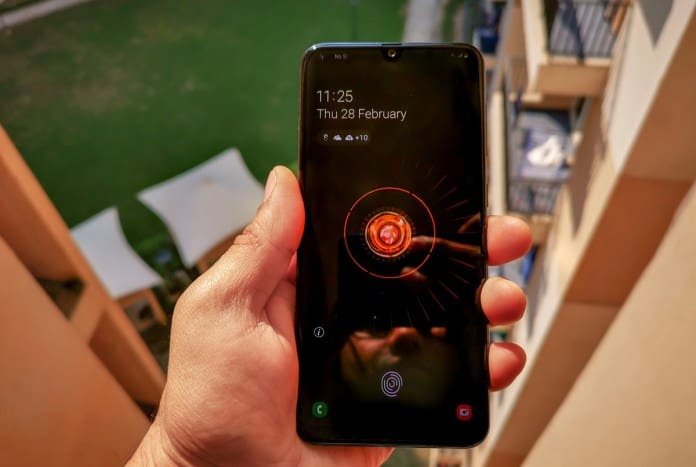 Samsung recently dished another of their groundbreaking smartphones into the market, the Galaxy Fold and Galaxy S10-series. They also shook up their mid-range segment with the introduction of the Galaxy M30, Galaxy A30, and the Galaxy A50.

The new smartphone A50 which was launched in March 2019 seems to be the leader of the recently released mid-range smartphones. The smartphone comes with lots of goodies in the bag and you will know about them in the review below.

At first, when you open the pack of the Samsung Galaxy A50, you will find out things are well packaged inside. Inside the Galaxy A50 box, you will find Earphones, Ejection Pin, Samsung A50 mobile phone unit, Travel Adapter, USB Type-C Data cable, TPU Soft Case Cover, User Manual, and documentation.

The front of the smartphone is made glass while the body is made of plastic, though it still retains a premium look.

One of the star features of the smartphone is the large 6.4 inches Infinity-U Super AMOLED capacitive display which makes the device look unique. The screen has a 19.5:9 aspect ratio with full HD+ resolution. Whether indoor or outdoor, the screen looks okay.

Apart from Galaxy S10-series, the Galaxy A50 is the only Samsung smartphone to come with an under display fingerprint sensor. The fingerprint response rate is quite okay, though it can’t be compared to some high-end smartphones or the one on the OnePlus 6T.

Should in case you don’t want to use the fingerprint scanner as a security option, you can opt for the fast Face Unlock. Still, on the front of the smartphone, you will find the single selfie camera at the top of the nearly edge-to-edge screen.

The Galaxy A50 sits comfortably in your palm and this is as a result of the well-rounded edges and the curved back. The smartphone is also light when you carry it around, it weighs 166 g (5.86 oz).

The cameras on the Samsung A50 are total four in numbers and they are all impressive. The front of the Samsung A50 is blessed with a 25MP selfie sensor with an f/2.0 aperture, 25mm (wide). The front though not so great, but will be okay for social media.

Meanwhile, the back of the smartphone houses triple cameras which consist of a 25MP with an f/1.7 aperture. The second one is an 8MP f/2.2 ultra-wide aperture with 123-degree field of view. The third which is a 5MP with an f/2.2 aperture for depth sensing. The primary cameras support Live Focus portraits and all take a number of decent photos.

The cameras have a quick focus and the Live Focus feature was a lot better than the one on the A30. The depth lens also has a noticeable pay-off.

Inside the Samsung Galaxy A50, there is a powerful Exynos 9610 chipset which ensures the smooth operation and performance of the smartphone. The in-house developed chip is composed of the octa-cores divided into two quad-core clusters and it is based on 10nm FinFET process.

The two quad-core clusters comprise of a Cortex-A73 core which runs at 2.3GHzand the other Cortex-A53 CPUs clocks at 1.7GHz. There is also the Mali G72MP3 GPU which handles the graphics.

Overall, the performance of the A50 is snappy and everything on the smartphone responds well.

We were glad to see the Samsung A50 is powered by a powerful Li-Po 4000 mAh battery. The battery is sure to sail you through the day even with heavy usage. Just like the A30, the A50 also offers quite a reasonable amount of time.

Despite featuring a huge battery life, the A50 still arrives with fast charging (15W) technology just like other ‘A’ series smartphone. So, even with heavy usage, you can still quickly top up your battery juice with the fast charge.

The Samsung Galaxy A50 ticks all the right boxes and seems to be a well-thought mid-range smartphone.