Let’s make welcome, Samsung Galaxy A9 (2018). Samsung has decided to take the part that is less taken by most smartphone manufacturers by dishing out the Samsung Galaxy A9 (2018) with four rear cameras. I’m sure most people are arguing in the background right now. Yes, you saw that right, four. Samsung believes the additional cameras makes for better images. 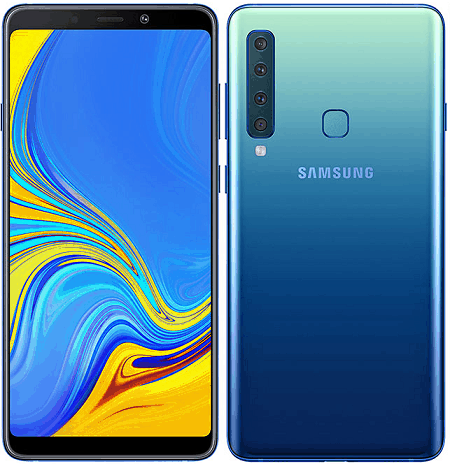 Samsung even made this open by saying the Galaxy A9 is ‘optimized for Instagram,’ this spells out that the smartphone is for social media and photo lovers. This smartphone was announced in October 2018. Apart from the camera of this smartphone, there are great features that this device arrives with, they will all be discussed in their various sections below.

The Samsung Galaxy A9 features a sleek design. The back and front are covered in glass giving it that elegant and premium look.

The Galaxy A9 comes available in three different colors, the lemonade blue, the caviar black, and beautiful pink. The Samsung Galaxy A9 has a body dimension of 162.5mm for the height, 77mm for width, 7.8mm for the thickness and finally, weighs 183g.

This smartphone also ships in with a 6.3-inches + Full HD & has a resolution of 1080 x 2220 pixels, which is wider than the Samsung Galaxy Note 9. There’s a fingerprint scanner at the back of this smartphone; there’s also the four vertical camera setup with a LED flash under, all positioned at the left.

From the statement of Samsung during the launch of the A9, you will find out that the company focuses more on the camera on the Galaxy A9. The Samsung Galaxy A9 offers four cameras at the back. The quad-cam comprises of a first 24MP which gives you a nice shot even in low light conditions, an 8MP, with 120-degree wide angle lens which allows more into each ball, the 5MP for depth-sensing and finally, the 10MP telephoto lens which provides you with a 2x optical zoom.

Now down to the selfie camera of this smartphone. The front side of the Galaxy A9 houses 24MP cameras. Samsung Galaxy A9 front camera does not come with any LED flash, unlike the back cameras.

All things being equal, the Samsung Galaxy A9 comes equipped with the Qualcomm’s octa-core Snapdragon 660. The chipset is not something new, we at least expected to see the Snapdragon 845, something to the tune of Snapdragon 710.

The Samsung Galaxy A9 chipset is supported by 6GB/8GB RAM versions and internal storage of 128GB of storage. The performance is quite okay like you can play high-end games and hardly notice any lag, though we noticed moderate heating.

There is also a Face Unlock though it doesn’t respond as fast as those on the Oppo, Vivo or OnePlus smartphones. The Samsung Galaxy A9 runs on the Android 8.0 Oreo. This smartphone comes in with pre-installed apps, and there is still a Samsung Pay on the Galaxy A9.

The Samsung Galaxy A9 is powered by a 3,800mAh battery, which is more more significant than the battery inside the Galaxy S9 and Galaxy S9 Plus. Though the battery may not be up to the 4000 mAh that other smartphones of its range ships in with.

The Samsung Galaxy A9 may not have been able to feature any wireless charging technology, but thankfully, it supports fast charging.

There is a whole lot of reasons why the Samsung Galaxy A9 (2018) should be praised. Beginning from its fantastic display, fantastic four rear camera setup, its sleek design and a whole lot more.