Tecno Camon C8, one of the latest device in Tecno store as Tecno also released Tecno Camon C9 to succeed C8, Camon C8 has been known for size and it has a nice feature targeted at the photographers. Tecno Camon C8 is an upgrade of the Tecno Camon C7 which comes with more – a higher spec in camera, bigger screen, more battery power and 4G connectivity. 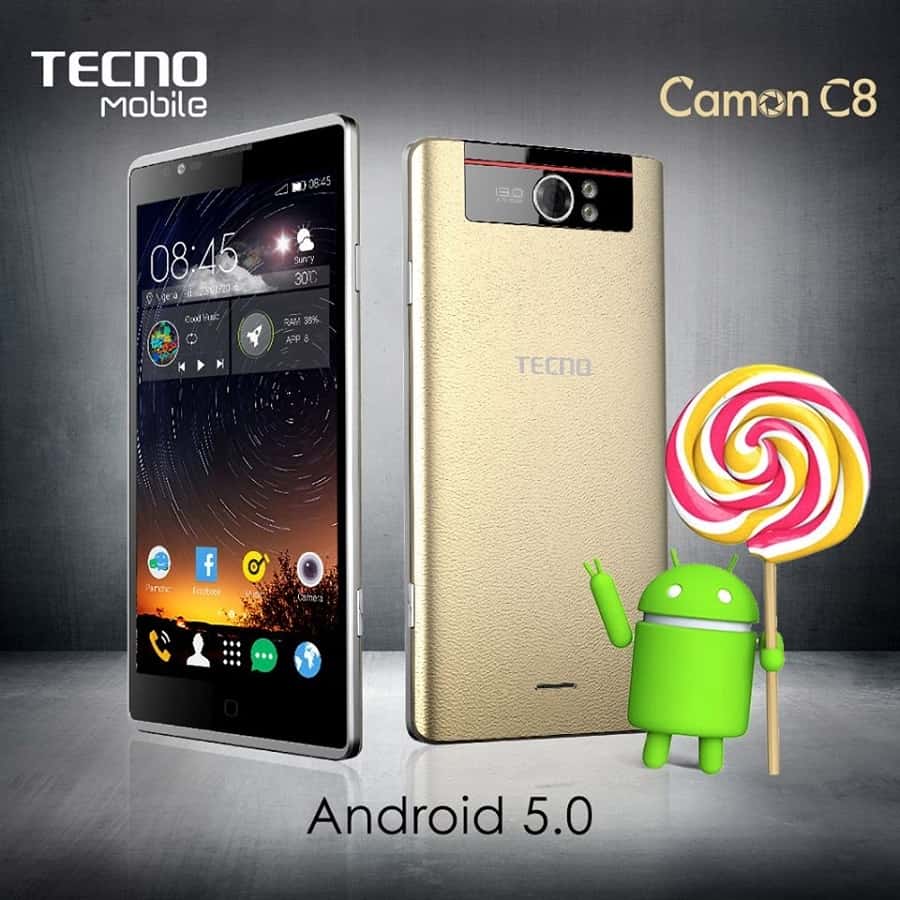 The Camon C8’s 720 x 1080p panel is very sharp and won’t leave anyone wanting for a lack of detail. Designed with a leather grainy texture, C8 sensor, unlike other smartphones, is located at the top of the Screen, it has softkeys placed below the screen which served the purpose of the sensor, you could also adjust the settings. This device is simple but fine, the Tecno C8 is covered in plastic and a little touch of style with the grainy metallic finish.

The Camon C8 measures 150 mm x 76.3 mm x 8.8 mm in length, breadth, and depth respectively. It uses one of the latest Android OS, version 5.1, the Lollipop.  The processor is quad-core MediaTek MT6735 (64-bit) with a speed of 1.3 GHz, packed with 1 GB RAM.  The GPU is Mali T720.  Internal storage is 16 GB and can be expanded by microSD of up to 32 GB. And it comes with a 3000mAh battery capacity, which would serve your needs without to worry about a power bank. If you are the game addict then you will have trouble with the smartphone

Talking about Camera, Sizes of the megapixels are not just the only features that make up the camera, the Camon C8 camera rocks a primary camera is 13 MP and a secondary of 5 MP and other features like  face detection, geo-tagging, touch focus and panorama, each of the main and secondary cameras has an LED flash and the camera can be activated by voice or a dedicated camera button.

Tecno is specifically working on the cameras of there devices and of recent are upgrading their battery as Tecno L8 and L8 Plus. This device is totally awesome to me, improve specs from its predecessor Camon C7, and a bigger screen and a more satisfying 4G connectivity that will give you super fast internet access.