Transsion Holding company, Tecno Mobile which is one of the widely used smartphones in Africa just dished out their much-awaited smartphone tagged the Tecno Spark 3 which was launched at an event in Lagos State in Nigeria. 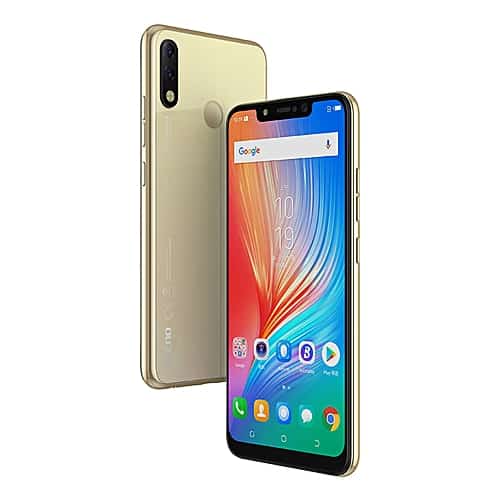 The Tecno Spark 3 comes with some awesome features that may catch your fancy and some of them includes the full view display, large battery, AI-powered cameras, and many others.

The Tecno Spark 3 comes with the interesting design though it comes with a notch, if you don’t like to see the notch in sight, then you can control it (Hide it or make it visible) through the OS settings.

The U-notch design at the front of the smartphone houses the selfie camera, the earpiece, and some other sensors.

The front of the Tecno Spark 3 is occupied by a full view display which is a 6.2-inch IPS screen which has a 19:9 aspect ratio. The screen has a resolution of 720 x 1520 pixels which are slightly above the  720 x 1440 pixels that the Spark 2 screen comes with.

On the back of the Tecno Spark 3 is made of a smooth panel which houses the vertical dual camera sensors which are positioned at the left-hand side. Under the dual camera setup, you will find the LED flash which assists the camera to capture clear and well-detailed images even in low light conditions. Still, on the back of the device, you will find the fingerprint sensor.

The Tecno Spark 3 arrives in three different color options which consist of the Bordeaux Red, Champagne Gold, and Midnight Black.

The Tecno Spark 3 comes in two different configurations which consist of the 1GB RAM Model and the 2GB RAM model.

The 2GB RAM Model features a total number of three cameras which consist of a dual 13MP AI cameras with a LED flash and on the front is the single 8-MegaPixel selfie camera which comfortably seats on the notch.

We earlier mentioned the smartphone arrives in two models and both have differences in both the RAM size, Chipset, and others.

The Tecno Spark 3 has the model which comes with the 1GB RAM and also features the MediaTek MT6580 chipset. The 1GB model also runs on the and Android 8.1 Oreo (Go Edition) and has an internal memory space of 16GB for storing your files.

The 2GB model arrives with a MediaTek Helio A22 (MT6761) chipset and also runs on the HiOS skin which is based on Android 9.0 Pie and has an internal storage of 16GB.

One of the admirable features of the Tecno Spark 3 is its battery life which TECNO Mobile was able to deliver well. Considering the price at which the smartphone is offered, you would not say that the 3,500mAh battery which the Tecno Spark 3 comes in with is not okay.

The 3,500mAh capacity battery is capable of delivering a full day use if only you will run the Android Go edition Applications, though most times the hours which the smartphone offers some times depends on the user’s usage.

Don’t expect to see any fast charging or wireless charging technology because the Spark 3 did not feature any of those specs but the charger in which the smartphone comes in with is okay.

But, if what you want is a smartphone that ticks all the basic boxes and also sales at an affordable price, then this smartphone should be included in your watch list.