This game requires the player placing their feet on the arrows that appear on the beat and screen.

In Normal gameplay, the arrows that appear are usually displayed upwards from the bottom of the screen. The arrow also passes through the receptors –known as the step zone.

DDR compels one to move one’s feet to a set pattern to perform a certain move.

The way it’s been played, when the passing arrows overlap the stationary arrows, players are required to step on the corresponding arrows on the dance platform.

As player steps, it gives judgment for every streaked note ranging from “Marvelous, Perfect, Great, Good, Almost and Miss”.

If successfully hit the arrows just in the Nike of time the life bar or dance gauge fills. If missed; it drains –means it’s a failure move.

We’ll be listing and giving short descriptions of a list of the Dance Dance Revolution games available in many a platform. The complete list of DDR Games 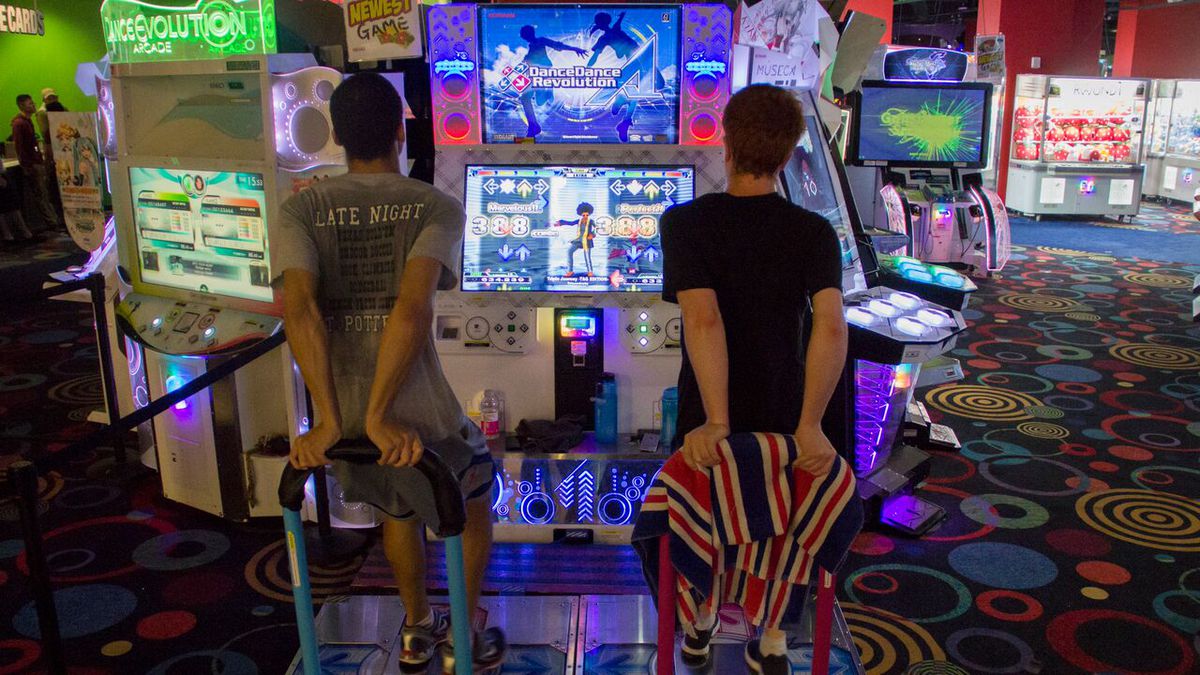 DDR A is a music video game. It’s a 15th installment of the DDR series of all times.

It Genre is a music and exercise gameplay. For the mode, it’s single-player and multiplayer.

This series really got things interesting. It changes the song selection screen. Other series uses a cover flow system, however, Dance Dance Revolution A changes it to Sound Voltex-like. The page-list actually gives the illusion of a can-touch interface. The selection remains same –usage of buttons below the monitor.

Nine great songs of choice and they’re organized in three rows. If player scrolled past them, there are an additional row of songs lined up. For the first time, the selection is done with a simple up and down buttons to skip a row.

This is the 14th installment of the DDR series there is. The game was published by Konami on 24th October 2012.

The cabinet for the game has been changed to white in the 14th installment. The change goes along with, an increased monitor in size from 37 inches to 42 inches. With a personal space created for players to put items.

The 14th installment features many updates both interface and gameplay. For the mode, it has the “TAG Play” –a brand new mode.

TAG Play is same to the Versus Play, but this time the game grants reward to the two players on both pads with Synchro-Bonus points.

This time around, the “GOOD” judgment does not break player’s combo anymore, rather, it counts toward it.

DDR Dance Wars is a stylish dance video game. But the game has stopped functioning as a result of team retiring from online on 1st September 2013.

As other Dance Dance Revolution series, DDR Dance War retains its core gameplay. The still old basic pattern of play as player matches the hit of the arrow that corresponds to the song’s timing.

Two modes are available now. They are Free Play Mode and Battle Mode. Battle Mode is the heart of this game. In Battle Mode players get to match against their rivals or aiding player through DCS “Dance Crew System.”

In this installment, players can build Dance Crew by simply recruiting other people. Respect Point could be easily earned through dance Crew to get or by item and upgrade skills.

DDR X3 is a music video game. It’s a part of the Dance Dance Revolution. DDR X3 was published by Konami on 2nd June 2011.

There has been copying of features added on the mode. E- AMUSEMENT capabilities to be precise. Also, a quick play mode was featured. It quasi- Marathon mode; in which the user can use the pay-per-song pattern for many a stage as arcade permits.

The Target Score allows players to see e-Amusement and machine records without playing a song. For the records DRILL COURSE had been removed.

Players can play long versions of songs but the full versions are available only for some Konami Original and licenses.

Multiplayer now uses dance pads and the game is capable of supporting up to four players. Accessing folder is made easy and 11 songs are placed inside folder conditions.

DDR Freedom was made available through Apple’s App Store on 11th February 2011 only in North America. It’s the second in DDR series to be made available for iOS. It’s a rhythm game made by Konami.

Just like every other Dance Dance Revolution games, the gameplay remains similar. Players hit arrows; to correspond with the selected song. But there are slight differences.

DDR Freedom features a virtual dance pad right on the device’s screen rather than a full-fledged dance pad peripheral.

From the get-go Course and Standard modes are made available with a “Shake Mode” option. This shake mode uses the device’s accelerometers for play.

This DDR is known as DDR Hottest Party 4 for the Wii version. While for other versions it’s known as DDR New Moves. It’s a music video game part of the Dance Dance Revolution series developed by Konami –the American division.

Choreography mode is a new mode featured alongside foot motions with the dance pad.

Note that basic changes are made for Wii & PS3.  Goal-based challenges are featured which gives the player the opportunity to earn points to unlock more songs and outfits.

Dance Evolution is an engrossing dancing video game developed by Konami. The game was released in November 2010.

DDR X2 is a part of the DDR series revealed by Konami on 20th November 2009. It’s a redesigned cover Flow-like music list. The design was copy-based on DDR Universe 3. It featured New “Pro” and “Happy” play modes.

The Happy mode was designed for novices, with a simple interface and reduced song list.  However, the Pro is basically the OK mode.

In Dance Dance Revolution X2 the stage end and jump right to the next stage if player missteps. Players who what to achieve higher scores find it really useful as a matter of fact.

With a simple use of up and down buttons on the cabinet, SPEED can be adjusted. DDR X2 has remover the Battle Mode.

DDR Music fit was revealed by Konami for the Nintendo Wii in Japan only –it’s a music video game just like the other DDR series.

Other DDR games to look out for are:-

This is the complete list of all DDR Games there is. Feel free to give us a shout at the comment section. Thanks for your time.