Smartphones came into our lives, and things just became easier via so many functions and features these phones have on them. Allowing to take control of our TVs without the regular remotes is one of these features. 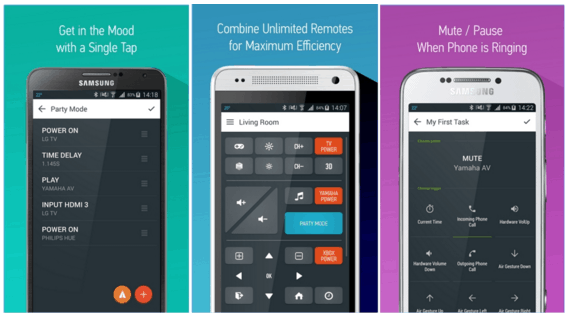 Often, these remotes get missing since everyone has access to it in the home and it someone goes from hand to hand, or it suddenly stops functioning or the batteries are dead, and they can’t be used. To save yourself these troubles, you can use TV Remote apps to control the TV using your Android or iPhone. Here are 10 Best TV Remote Apps For Android and iPhones 2019:

It is very popular on the Android platform if we are talking remote control apps. Used by more than 9 million people, the Universal TV Remote Control supports all major TV Brand and works with IR-Blaster phone or tablet. Configuring the app, selecting your TV brand and connect with your TV gets you started. It has a user-friendly layout that comes across as a real TV Remote; it does not just control TVs, ACs and other remote controlled device are not left out too.

Is the first TV Remote app of Google Play that supports all major TVs. Android devices that come with Built-in IR Blaster enjoy this one. But guess what? This app can also be used for non-IR Blaster device to control only Smart TV that comes with built-in Wi-Fi. It is a user-friendly app and can easily be configured to connect to any TV.

Just access your setting option, select connection mood IR Blaster or Wi-Fi and you are set to go. It is very compatible with all popular TV Brands like Samsung, LG, Panasonic, Sony, etc.

If you do not like a free app and prefer to pay for things, then the Smart IR Remote – AnyMote is your guy. IR Blaster enabled Android device, Wi-Fi enabled Smart TV, or Infrared enabled the device to aid its use. It works well with major Samsung, HTC, LG, and other popular Smartphone and tablet.

If your television is an LG TV, then you have to get the LG TV Remote. As long as it is an LG TV released at most, seven years ago or later, you are covered. It works with Only Smart LG TV models which come with built-in Wi-Fi feature. It supports Mini TV and also has Built-in Hotkeys for volume, power on/off and channel up & down.

When 19 million people already use an app, you know its the real deal. You can call this remote app an unofficial Samsung TV Remote App because this app works with almost all Samsung TV Models. It supports All Samsung B, C, D, F and E Series TV models. You are also allowed to save your favorite TV channels for quick access.

6. The Remote Control for TV

Another popular Android TV Remote app that only works with IR-Blaster enabled devices. If your device doesn’t have IR Blaster, don’t panic, you can use an external InfraRed or IR Blaster to gain access to use this app. It can control home theater. Its interface is user-friendly and straightforward.

This app comes with your essential TV remote functions to aid a TVs control from an Android device. It only works with IR enabled smartphone or tablet. Any aged customer has a great experience with it since it interfaces is the type that anyone should be able to work with. You can control volume and change channels quickly. It is simple to configure and connect with the most popular TV brands.

If we are talking highly rated TV Remote Apps for Android that go alongside the highest user reviews, Peel Smart Remote is high up there on that list. It is built with basic and advanced functions of a TV Remote. It is easy to configure and can connect your smartphone and TV as quickly as possible.

This app can be used to gain control over the DVD Player, TV set-top box, music system or home theater. Simply put, You can control more than 40 thousand devices and even create your favorite TV channel list for quick navigation.

The slogan says “Simplifies Your Life.” This is so true. The SURE Universal Remote controls your TV, Air Conditioner or Home Theater box. It has the highest rating on Google play store as regards apps like this. It gives you the control you need via a remote for your Smart TV over Wi-Fi or your old model’s TV over Infrared.

You also get to control Roku media streamers. Viewing images or videos on your Smart TV from your phone is also a possibility. It is one of the few Remote apps that support voice commands, and it has more than 97 thousand user review on Google Play.

The IR universal TV remote,  IR based app that allows you convert your phone into a remote. Once you enter this app, press TV and then the model or name of the television you are looking to control using this app. You’ll find various sets of control options depending on your TV model. You can select from any of the given set as per the one you fancy. After the setup is complete, you are set to use your device as a remote. This TV remote app works without Wi-Fi.

There you have it, the best remote TV apps for Android and iPhones. If you have other recommendations, not featured in this article, feel free to drop them in the comment box below.