Everything You Need To know About Apple M1 Ultra

Referred to as the world’s most powerful chip for a personal computer, Apple unveiled the M1 Ultra at the Apple’s Event held on March 8, 2022. The M1 Ultra is available in the new Mac Studio. This post covers everything you need to know about Apple M1 Ultra

UltraFusion is one of M1 Ultra’s most notable features. According to Apple, UltraFusion links the dies of two M1 Max processors to build a system on a chip (SoC) with unrivaled performance and capabilities. The new SoC has 114 billion transistors, the most number ever seen on a personal computer device. 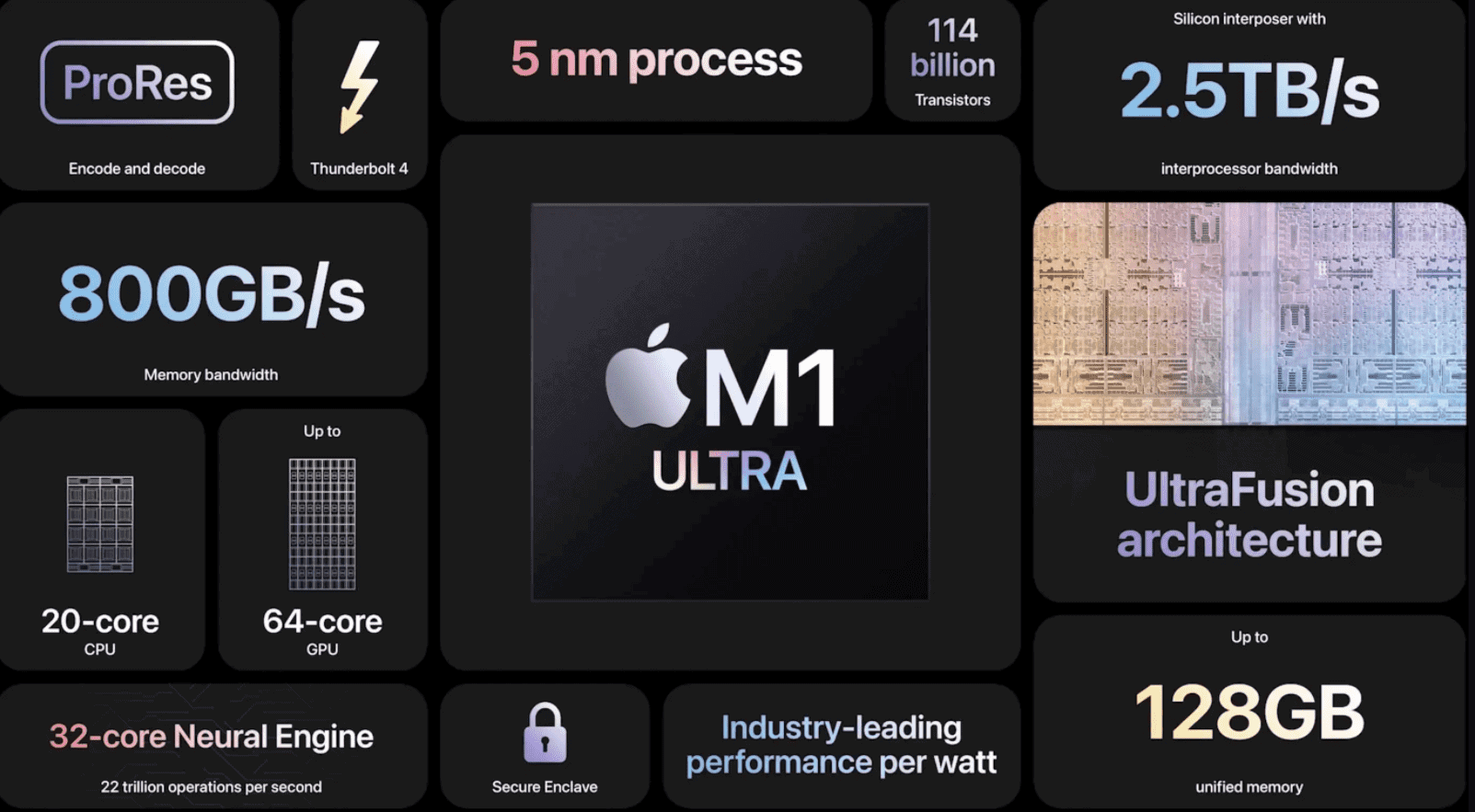 M1 Ultra configuration allows for up to 128GB of high-bandwidth storage. Configuration for low-latency unified memory may be accessible by the 20-core CPU, 64-core GPU, and 32-core Neural Engine to deliver remarkable speed for developers generating code and artists working in vast 3D worlds that were previously impossible to produce. Professional video editors can convert the footage to ProRes up to 5.6 times quicker than a 28-core Mac Pro with Afterburner.

It includes a 64-core GPU, 8 times the size of M1 for graphics-intensive tasks, such as 3D rendering and complicated image processing. The intensive core gives faster performance than even the highest-end PC GPU while using 200 watts less power.

The memory bandwidth has been increased to 800GB/s, which is more than ten times faster than the most modern PC desktop CPU, and the M1 Ultra can have 128GB of unified memory. The M1 Ultra’s 32-core Neural Engine performs up to 22 trillion operations per second, accelerating even the most challenging machine learning workloads. M1 Ultra provides unrivaled ProRes video encode and decoding performance.

Up to 18 streams of 8K ProRes 422 may be played back on the new Mac Studio with M1 Ultra. Custom Apple technologies, such as a display engine capable of driving multiple external displays, integrated Thunderbolt 4 controllers, and best-in-class security, such as Apple’s latest Secure Enclave, hardware-verified secure boot, and runtime anti-exploitation technologies, are also included in the M1 Ultra.

According to Johny Srouji, Apple’s senior vice president of Hardware Technologies, “Apple’s M1 Ultra is another game-changer that will shock the PC market. We’re able to expand Apple silicon to unprecedented new heights by linking two M1 Max die with our UltraFusion packaging design. The M1 Ultra completes the M1 series as the world’s most powerful and capable SoC for a personal computer, with its powerful CPU, large GPU, amazing Neural Engine, ProRes hardware acceleration, and a massive amount of unified memory.”

It will be exciting to see these unique features come to life in the Mac Studio, and the good news is that the Mac Studio has begun shipping on March 18.