I kept wondering why Nokia would move over to the Android OS other than their native mobile Operating System which is currently the Windows Phone. There is no doubt that Android rules the mobile world and Nokia (owned by Microsoft) is willing to have a taste of this. 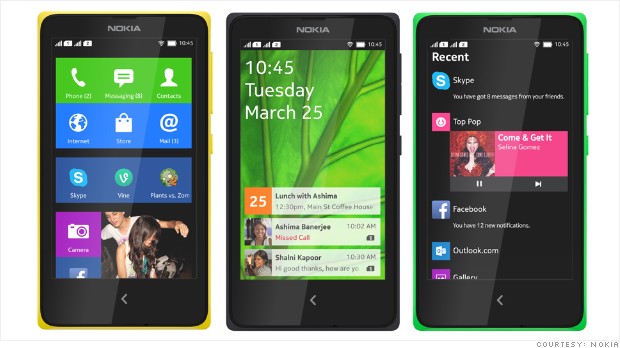 Nokia’s CEO Elop unveiled the Nokia X, Nokia X + and Nokia XL low end smartphones at the Mobile World Congress. While these phones run the android OS, they still maintain Nokia’s flavor with an interface that looks like the tiled Windows Phone Interface and so doesn’t rather compete with Nokia’s main Lumia line of Windows devices.

The Nokia X series of smartphones are built on open source version of the Android operating system with a baseline of the 4.1 JellyBean OS. It actually appears to be an experiment to meet up the needs of the Nokia android thirsty fans out there.

Features such as the Play Store belonging to Google are not included in these phones as they maintain Microsoft’s own services, including Here Maps, and the Bing search engine.

There’s no doubt that if the Nokia X series turn out to be a success that Microsoft would be willing to push their productions and services for it to the limit.