In 2013, Nokia first released their N-Gage in an attempt to woo gamers, nevertheless, that didn’t work commercially. Also in 2011, the Xperia Play’ was dished out to gamers by Sony Ericsson and wasn’t able to deliver as they had already promised. 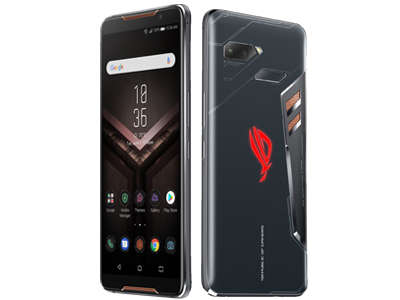 Other gamers smartphones were produced, and while some made it into the market, most of them were not able to appeal to gamers. And now in October 2018, Asus wants in on the action. This is their first gaming smartphone launched under the Republic of Gamers (ROG) brand for desktops, laptops, and peripherals. This smartphone has also been awarded as the best gaming smartphone of 2018.

On the front of this device, you will find that fantastic 6-inch AMOLED screen which occupies 84.5 percent of the front of the smartphone. The front also houses two long, front-facing speakers. According to Asus, the display featured on their latest device is the world’s first sixth-generation “2.5D” Corning Gorilla to be featured on a smartphone. On the back of the Asus ROG Phone, there is a Smooth 3D Curved Gorilla Glass protects the end.

You will still find the 3.5mm headphone jack and USB Type-C along the base. There is also a fingerprint sensor & dual SIM card slots. The back of this device houses two cameras, while the front has just one. The ROG has a body dimension of 158.8 x 76.2 x 8.6mm, weighs 200 grams & comes in black color only.

The Asus ROG Phone comes with a dual camera set up at the back which comprises of a 12 MegaPixel assisted by another 8 MegaPixel. The primary camera has a regular lens and while the other wide-angle.

On the front side of this device is seated an amazing 8 MegaPixel camera. Nevertheless, the camera is nothing like we have never seen before. You still have the normal portrait mode with adjustable blur, Google Lens integration and the manual camera mode.

The Asus ROG Phone runs on Android 8.1 Oreo, coupled with the Asus’s ROG UI skin. You may find the UI a bit bloated, for those prefer stock Android. I was a little bit disappointed to find out that this smartphone didn’t feature the Android Pie, though there will be an update in the nearest future.

Powering the ROG Phone is an overclocked Qualcomm Snapdragon 845 SoC chipset accompanied with its four “big” Cortex-A75 cores which clock at 2.96GHz and four “little” Cortex-A55 cores which clocks at 1.77GHz. Nevertheless, the Adreno 630 graphics chip which is included in the SoC handles the processing of most games.

The Asus ROG Phone comes with two storage configuration one with 128GB/8GB RAM or 512GB/8GB RAM.

According to Asus, the battery of the Asus ROG Phone can charge from 0% to 60% in 30 minutes. The Asus ROG Phone arrives with Powering a 4,000mAh battery capacity. While during our time with this smartphone, we were able to get 0% to 100% in 133 minutes.

The smartphone uses the Fast battery charging 10V/3A 30W (Quick Charge 4+), and that is one of the reasons I can’t complain about the battery section.

This smartphone comes in two storage configurations, and they all have different price tags. The model with the 128GB storage costs $899 while the bigger storage version, 512GB is sold for $1,099.

Before purchasing a smartphone, I usually ask myself what do I want from that smartphone. I think you should do the same.

If you have made your choice and resolved to play more games, then this smartphone is for you. Asus ROG Phone has other useful features like cameras, screen display, design and more. But, overall the smartphone focuses on the gaming aspect.