Taiwanese manufacturer, Asus has rolled out several limited edition products in celebration of its 30th anniversary this year 2019. Some of the products they dished out include laptops, motherboards, and others. They also dished out their anniversary smartphone, Asus ZenFone 6 Edition 30 which happens to be a limited edition. 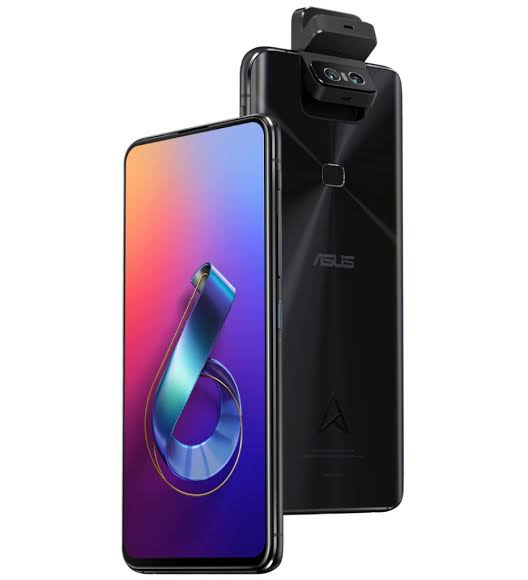 Asus promised to roll out only 3,000 pieces of the new smartphone with a 30-month warranty. The limited edition smartphone is actually a special variant of the ZenFone 6 with an “exclusive design” featured at the back.

One of the main upgrade this smartphone features over the ZenFone 6 is in the hardware. Below are the full specifications and features of the anniversary smartphone.

As we mentioned, the smartphone has a similar build with the recently released Asus Zenfone 6. The first thing you notice on the smartphone is its all-screen display which is not interrupted by a notch or bezel.

The front of the smartphone houses the 6.4-inch IPS display which has a resolution of 1080 x 2340 pixels (403 PPI). The screen uses the Gorilla Glass 6 for protection. You wouldn’t find any selfie camera on the front of this device, Asus employed a Motorized flip-up mechanism which houses two camera sensors.

The earpiece of the smartphone is hidden in the Motorized flip-up mechanism. Meanwhile, the back of the device features such an awesome design. First of all, you will find the dual primary camera horizontally arranged with the LED flash in the middle.

The primary camera doubles as the selfie camera and this was made possible due to the employed Motorized flip-up mechanized concept. You will also find the embossed ‘Edition 30’ logo at the back.

The matte black for starters (grey) features a concentric circle ‘etches’ that catches the light. You will also find a horizontal Asus logo in a faded grey.

The Asus Zenfone 6 Edition 30 technically has a total number of two cameras. But practically, the cameras can be said to be four, this is because the same dual motorized flip-up primary cameras at the back, still double as the selfie cameras.

Must Read: Samsung Galaxy A50 Review – Specs, Features and Price

The cameras also bring along with them some interesting features which consist of the Autofocus, Geo-tagging, face detection, touch focus,  and panorama.

We mentioned earlier that one of the notable changes is in the hardware. The anniversary smartphone has been boasted with a 12GB RAM and slammed with 512GB built-in storage. The storage can further be expanded with up to 1 TB via a microSD card.

Also, you will find the Qualcomm Snapdragon 855 processor which ensures smooth performance. Apart from the upgraded hardware, we have mentioned, all other hardware on the smartphone is similar to the Asus Zenfone 6.

The Asus Zenfone 6 Edition 30 runs on the company’s ZenUI 6 software which is based on the Android 9.0 Pie OS.

As a result of many interesting features, the Asus Zenfone 6 Edition 30 comes in with, it also brings along a huge battery. It is a 5000mAh battery Li-Po Non-removable which provides more usage.

The battery also supports other features such as the 18W wireless charging, and Quick Charge 4.0.

Also, we were able to come up with an estimation of about $ 721 which is equivalent to 260, 000 Naira. The price of the device depends on the location as well as the deal. We hope to update this page soon with the official price tag.

There is an adage that goes like this ‘Nothing good ever lasts forever’ and the same applies to the Asus Zenfone 6 Edition 30. The new smartphone is ‘one in a million’. It brings with it interesting features and specs. It comes with a huge battery life, nice camera concept, notch-less display, and fantastic performance.

There are a host of other things like the 30-month warranty and many more. The only problem is not in the specs and features of the smartphone, but the limitation. The smartphone is a good bargain if you can actually lay your hands on it.

If you can’t get your hands on the smartphone, then you can settle for the younger sibling, Asus Zenfone 6.