Here comes another powerful smartphone Huawei who has been busy dishing out amazing smartphone this year. The new smartphone from Huawei is an alternative to the more premium flagship of the Huawei Mate 20 Pro and Huawei P20 Pro. 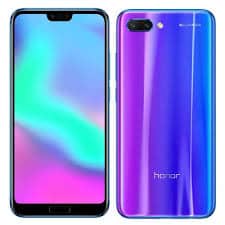 Before now, the Honor series was well-known to offer less expensive alternatives to even Huawei’s flagships and they were good at it. Today will be discussing the newly released Huawei Honor 10 which comes along with interesting and amazing features. This smartphone was both announced and released in May 2018.

The Huawei Honor 10 arrives with an eye-catching design and a premium build. The body of this device is made of glass. According to Huawei, the sleek glass design comprises 14 layers. The glass offers a notch display which was made popular by the iPhone X, and it also matches the metallic frame.

To give something that gives you a flagship experience, the Huawei Honor 10 was able to arrive with a sizable display which is very beautiful as a result of small bezels that this smartphone comes with. Huawei Honor 10 has a modest 5.84-inch and a 2280 x 1080 pixels display, which offer a fantastic viewing experience.

The Huawei Honor 10 comes in with three cameras in general (dual back cameras and a single selfie camera).

On the back of this mid-range smartphone, you will find a dual camera set up, which comprises of a 16MP RGB sensor and a 20MP monochrome sensor. On the front side of this smartphone, there is a powerful selfie camera, that ships in with a whopping 24 Megapixel, and an impressive background blurring effect coupled with other amazing features that makes this camera very interesting.

This smartphone gives you nice shots with a very nice amount of details. Overall the cameras are amazing considering its niche. The cameras are further beautified with the addition of an AI assistance.

The Huawei Honor 10 uses the Octa-core Hisilicon Kirin 970 chipset with the Mali-G72 MP12 GPU assisting. The Huawei Honor 10 also arrive in different storage options; there is the  64GB storage version with 4GB RAM and the bigger 128GB storage option accompanied by a 6GB RAM. The sad part of it all is this; if the storage doesn’t seem to be enough for you, you can’t expand it because this device does not support storage expansion.

The Huawei Honor 10 runs on the Android 8.1 Oreo that is accompanied by the EMUI 8.1 skin on top.

The Huawei Honor 10 houses a moderate 3, 400mAh battery capacity which is an excellent one considering that this is an average smartphone. The Huawei Honor 10 is fortified with an efficient power conserving system and to crown it all, this smartphone still drives in with a fast charging technology.

The Huawei Honor 10 comes with a moderate price tag, it is currently available and is sold for about $455 / 400 EUR which is equivalent to 165,128 Naira. You can purchase this smartphone from Huawei’s distribution retail outlets or most online stores.

Though the Honor 10 was not able to arrive with waterproofing & no premium camera sensors with stabilization, yet that’s the worst it can go.  And apart from the minor flaws that are mentioned above, the rest is top-notch.