2018 seems to be the year of smartphones, with many of them being manufactured with lots of out of this world specs. And today we shall be going into an in-depth review of another newly released Android Smartphone with 100% notch-less and bezel-less retro sliding screen, and also comes which an amazing triple selfie camera, accompanied with an in-display fingerprint sensor. The Huawei Honor Magic 2 was launched at an event held in Beijing on Wednesday.

Here comes another great phone with high performance for those looking for a beautiful all-screen smartphone with an under-glass fingerprint sensor, then you need to check out the newly launched Honor Magic 2. This device has a striking resemblance with Xiaomi Mi Mix 3.

Just keep reading to get all the information you need about the newly launched Huawei Honor Magic 2, like the design, specs, features, price, release date and so much more.

The Huawei Honor Magic 2 comes with a sliding design that can get the screen moving down and cameras popping up in a flash with just a firm press and that’s all that is needed. The smartphone also comes with a 6.39-inch AMOLED display that is seated on its 100% screen-to-body ratio, coupled with a 1080 x 2340 pixels that comes with a pixel density of 403ppi and supports the DCI-P3 (108 percent) color gamut. The Huawei Honor Magic 2 also comes with one of the most substantial features which is the trend of today for most flagship smartphones and it is the in-display fingerprint sensor. 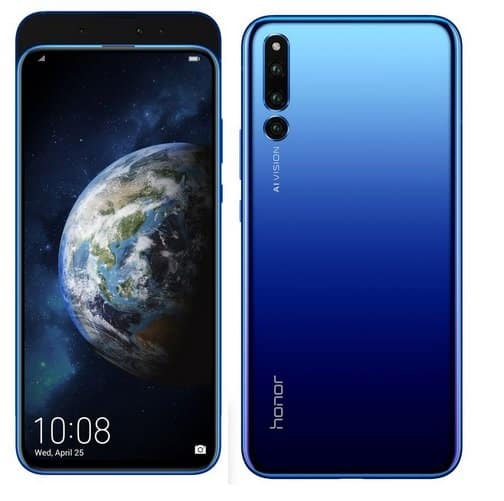 If you can remember, the Huawei Honor Magic 2 was teased way back in August at the IFA trade show held in Berlin, but here we are with the officially released Smartphone specs that won’t be available outside of China. If you slide the display down the front facing camera will be revealed, coupled with the 3D Face Unlock sensors, and another camera that is used for portraits mode.

Luckily for many people, the Honor Magic 2 features a certified IPX2 rating for water and dustproof. This device weighs 206 grams and also comes with a 157.32 x 75.13 x 8.3mm dimension. If you take a look at the back of this device, you will see a set of three cameras set up that is vertically positioned at the upper left edge of this smartphone. The back of the Huawei Honor Magic 2 is designed with the Nano-scale Optical Coating material for a beautiful two-hued gradient.

The Honor Magic 2 comes with a set of triple cameras vertically seated by the left side at the back, 16-megapixel primary back sensor with a f/1.8 aperture, coupled with a 24-megapixel monochrome sensor that has a f/1.8 aperture, and another 16-megapixel sensor that comes along with a super wide-angle lens and a f/2.2 aperture. The rear camera module has some resemblance with the Huawei P20 Pro but with a different camera setup.

The Camera also comes with features like the AIS tech for image stabilization, coupled with a single-LED flash. Over to the front-facing camera. The Huawei Honor Magic 2 still retains triple camera setup, a 16-megapixel primary sensor that comes with a f/2.0 aperture, and a 2-megapixel + another 2-megapixel with a f/2.4 aperture for 3D Face Unlock.

There is a special camera feature for women at the back cameras. This feature enables you to takes picture of your skin, analyzes the skin condition and will be able to tell you if you have any wrinkle, how old it looks and still lets you know whether you need to do more skin care. There is also a Google Lens integrated into the camera app, which will be able to identify products and still recommend similar objects for shopping.

The EMUI 9.0 is going to be running on models but others are going to receive a radical update sooner or maybe later. The Huawei Honor Magic 2 comes available in two models, the 6GB RAM and 8GB RAM options, assisted by 128GB or 256GB inbuilt storage, nevertheless, all models can’t be expandable via microSD card.

The Huawei Honor Magic 2 houses a very powerful 3500mAh battery capacity, though we expected something a little bit above what we have here. It also features a 40W Magic Charge fast charging tech. Huawei made claims that this new tech featured in the battery section will be able to deliver from 0% to 100% full charge in 55 minutes. It also comes with Yoyo AI assistant.

The company’s sub-brand also made mention of its first smartwatch named the Honor watch that comes with a 1.2-inch AMOLED display, can endure for seven days on a charge and also comes with a heart-rate monitoring. It will globally be on sales in January 2019. The device also comes with wireless earbuds called FlyPods which has a striking resemblance to Apple’s AirPods.

The Honor Magic 2 comes with a lot of exciting features like the 6 amazing cameras, a high-ranking performance, great design on top of the 100% screen to body ratio and a whole lot of other super nice specs. Looking at the Honor Magic 2 from a holistic point of view, all I can say is that this device is simply amazing, though it is only going to be available only in China.