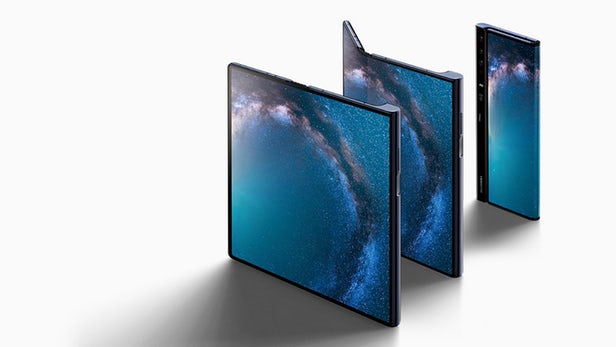 The Huawei Mate X was announced on February 2019, though the release date for the smartphone has not been specified, but according to the company at the MWC 2019.

The new foldable smartphone can change from the full view 8-inch Android tablet into a 6.6-inch and 6.38-inch smartphone. From the look of things, the Huawei’s FullView bezel-reduced screen makes the device look even more optically appealing than the Samsung Galaxy Fold.

The Huawei Mate X comes in with lots of excellent features like the 5G network, vast 4,500 mAh battery capacity, the powerful and new Kirin 980 chipset and so many more that will be revealed in the course of this review.

The design of the Huawei Mate X comes in with lots of impressive technology that beats your imagination.

There is a button located on the back of the Mate X when pressed; it releases the back portion of the smartphone’s display so that it maintains its normal 8-inch tablet shape.

The left side of the rear screen (the vertical bar) contains the brain of the smartphone, beginning from the triple-camera system down to the power button/fingerprint scanner combo. The base of this smartphone houses the USB-C port for charging. The sidebar is where virtually all the internal are squeezed into.

According to Huawei, the Mate X bendable screen has endured 100,000 folds in lab-condition stress tests. They also made claims to have built a case to keep the device protected.

According to Huawei’s rep, the Mate X will go through a series of durability tests and other minor changes before it will be launched in a few months. This means you could see the Huawei Mate X appear a lot better than it looked at MWC.

Much was revealed about the cameras on the Huawei Mate X, though we are sure this device arrives with a triple camera setup.

There is no selfie camera; you only find triple cameras on the back of this smartphone. Selfie lovers must be frowning now, but we assure you, there will be no need for that because the Huawei Mate X’s primary cameras also double as a selfie camera and a viewfinder at the same time.

You can use the second screen to create a dual viewfinder with either side of the phone, allowing you to preview the image before it is taken. The selfie camera functionality was just impressive.

A live view of the image that is in frame appeared on both sides of the folded smartphone, allowing both the image taker and picky individual that employed the help of the image shooter to see everything.

Huawei wasn’t letting everything out when it comes to the cameras. We thought maybe the cameras features tech from the future – which is something the company intends to announce on its next Huawei P30 smartphone, which will take place by the end of March.

Or could it possibly be that Huawei hasn’t been able to iron out the details as about imaging with the Huawei Mate X? Nevertheless, this is all a guesswork.

When it comes to the performance of the Huawei Mate X, the device is a speed demon. The Huawei Mate X  is Powered by a Kirin 980 processor and a Balong 5000 5G modem, the smartphone changes quickly and supports 5G network and is capable of downloading a 1GB movie under a few seconds.

Though we may not be able to see such an incredible speed in the flesh when the smartphone finally arrives towards the half of the year, the numbers that were written down gives us hope the expensive smartphone will be future-proofed in terms of data transfer speed.

The Huawei Mate X will be coming in with internal storage of 512GB with an 8GB RAM. For those who the room may not be enough for, the smartphone supports memory expansion up to 256GB using a Nano-Memory.

The Huawei Mate X uses a customized version of Android which is best for the multiple folds and unfolds. The interface optimizes itself for both phone and tablet orientation in milliseconds. Despite the release date of the Huawei Mate X is still far, yet our experience with the UI was an awesome one.

The battery is one of the most talked about specifications of the Huawei Mate X. This device comes with dual batteries which combines to offer you a powerful 4,500mAh, which is a bit bigger than the Samsung Galaxy Fold.

Don’t forget that apart from the battery, the Huawei Mate X also comes with a little bit bigger screen than the Samsung Galaxy Fold. And we think this may make the Mate X more power hungry than the Galaxy Fold.

The Huawei smartphone uses the 55W SuperCharge technology, which is better than the 40W charging which Huawei Mate pro comes in with. The fast charging technology on the Mate X can offer you an 85% extra battery juice within 30 minutes of charge.

This smartphone will first be launched in the UK on EE. Meanwhile, Huawei said that the launch date would certainly fall between June, July, or August. Don’t get it twisted; this smartphone will not be launching everywhere, because currently, we are yet to receive any US release plan.

The Huawei Mate X is among the best foldable smartphones produced this year, though it is not the first, it could be the best that you may be willing to throw such a tremendous amount of money on.

The smartphone has screens on both sides of the device when folded giving you a 6.6-inch and 6.38-inch smartphone. Meanwhile, the unfolded length offers you a full 8-inch tablet. This Huawei Mate X is merely the smartphone of the future, don’t forget there is also a big price to pay for having and feeling the feature before it comes.