Huawei has finally unveiled their much-anticipated smartphone, the Huawei Nova 5T. The Huawei Nova series has long been considered as one of the most sort after smartphone and dominating most markets across countries. Most people were amazed to see a Chinese brand rise to be a major threat to the dominance of big smartphone companies like Samsung and Apple. 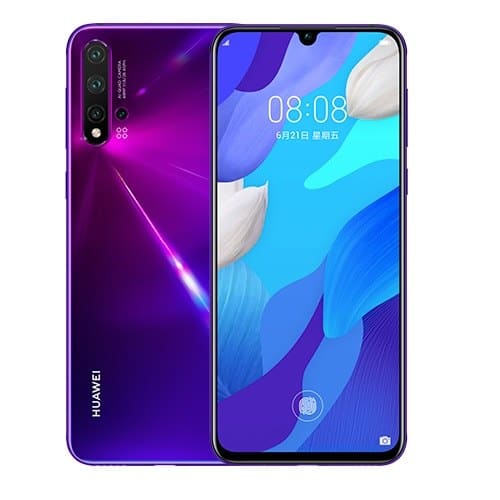 Ever since Huawei introduced the Nova series which has launched a massive assault on the midrange market and introduced great smartphones with high-end specs at a more accessible price tag. Currently, other companies producing smartphones have started using the same method that has been working for the Huawei Nova series.

The new smartphone still retains the traditional behavior of the Nova series which is providing users with excellent value for their money. Considering the various specs, features and the price tag at which the latest Huawei Nova 5T comes in with, the smartphone is qualified to be tagged as a steal.

The Huawei Nova 5T features an impressive design and also has a striking resemblance with the Honor 20, though with few internal and external changes.

The smartphone is built with aluminum and glass which goes a long way to give it its premium look and feel. The front has very slim bezels which curve at the edges and surrounding the huge 6.26-inch screen. It has a Full HD+ resolution resulting in a good 412ppi. The resolution can be adjusted allowing you to high it or lower it if you want to save power.

It uses an IPS panel, which means colors are natural with great viewing angles. There are two color modes that you can choose from; the Normal and Vivid, depending on your preference. The single selfie camera is hidden inside a punch hole on the screen, while on top of the slim bezels lies the notification light, the earpiece, and the proximity sensor.

The punch hole can be a little bit distracting when using most apps that place some important elements in that corner. Nevertheless, you can hide the hole by simply activating a toggle inside Settings.

The bottom of the Nova 5T holds the main microphone, loudspeaker, and the USB Type-C port, while the top holds the IR blaster, and the secondary microphone. You will no longer find the 3.5mm jack on the smartphone, but Huawei added an adapter in the package.

On the back of the smartphone, you will find the protruding camera setup which holds three cameras with the LED flash under the setup while the fourth camera is beside the setup. The glass back is different from the Honor 20 and produces a 3D light effect.

The Huawei Nova 5T has a total number of five cameras four at the back and the single selfie camera hidden in the punch hole.

The primary camera consists of the 48-MegaPixel Sony IMX586 main sensor, the 16-MegaPixel ultrawide, 2-MegaPixel depth assist, and the 2-MegaPixel macro which is outside the camera module. The different lenses on the Nova 5T have qualified the smartphone as a very versatile shooter.

All the cameras are AI-supported and some times they come out too aggressive usually when it applies HDR, nevertheless, you can adjust it using your favorite photo editing app.

The selfie camera hidden in the punch hole is a 32-MegaPixel camera sensor. All the cameras on the Huawei Nova 5T produce sharp images with enough details even in low light conditions the performance is still impressive. Sometimes the camera illuminates the whole scene as well as apply the HDR without having to activate the Night Mode. The AI Image Stabilization prove very capable of handling shakes and capable of minimizing blur.

The camera can still record 4K video resolution at 30 fps. You can decide to shift it from the normal field-of-view to ultrawide in order to zoom in one shot. The video stabilization is also impressive and smooth.

Powering the Nova 5T is the HiSilicon Kirin 980 processor from Huawei’s semiconductor division. You also find the same chipset paired with an 8GB RAM and 128GB UFS 2.1 storage inside the Huawei P30 and the P30 Pro. The chipset is still one of the fastest processor available in 2019.

The chipset is Huawei’s latest flagship AI processor and also the world’s first 7nm Mobile AI chipset with dual neural processing. The Kirin 980 promises a 75% increase in CPU performance with an overall 120% AI performance and 46% of a camera and graphic processing boosts.

The performance of the Nova 5T is further enhanced with the combination of the chipset and the much enhanced EMUI 9.1 resulting in over 55% of operational improvement. Some of the improvement includes on-screen functions, smoothness, and speed of app access and more.

There is virtually no lag experienced with the Nova 5T as we were able to play high graphic demanding games such as the NBA 2K19 and PUBG Mobile without encountering any troubles.

You will also not experience any problem with your daily task such as scrolling through menus, swiping, and other activities. The performance overall was excellent.

The smartphone comes with lots of connectivities such as dual-SIM support, WiFi ac, LTE, NFC, USB 2.0 Type-C, and Bluetooth 5.0. The only thing you don’t find is the 3.5mm audio port.

Under the hood, there is a 3,750mAh Non-Removable battery which powers the whole smartphone but it would have been better if they just completed 4,000mAh. The battery offers you about 15 hours 13minutes of video playback, while we had about 9 hours plus for mixed usage.

The Nova 5T comes equipped with Huawei’s 22.5W SuperCharge which adds extra battery juice as fast as possible. We were able to fully power the battery from 0% to 100% before 2 hours. You can power the battery with the USB 2.0 Type-C port.

The Nova series has always been known for providing users with smartphones with high-end specifications and features at a very low price tag.

The Nova 5T still maintains the same record and is currently priced at about $364 which is approximately equivalent to P18,990 and qualifying the new device as a steal. The price of the Nova 3 during the launch was about $498 (P25,990), while the Nova 3i was set at $306 (P15,990) they both were considered by many people to be one of the best deals.

You can’t possibly get it wrong with the latest Huawei Nova 5T smartphone. The device brings lots of interesting high-end specifications and features at an affordable price tag. It offers you a premium design, impressive cameras, beautiful display, decent battery life, and excellent performance. What more could you possibly be asking for?

If you have been using the Nova 3, you will find more reasons to upgrade to the latest Huawei Nova smartphone. If you want a flagship-grade Huawei smartphone but don’t have sufficient cash to afford the P30 Pro, then the Nova 5T is smartphone need.