After much anticipation and massive rumors, Huawei decides to launch their latest smartphone, the Huawei Y9 (2019)which seems to be a major upgrade over the earlier released Huawei Y9 2018. The current smartphone, Huawei Y9 (2019) drives in with many appealing features like its sleek design, much-taunted AI cameras and more. To crown it all, this smartphone is a wallet-friendly device. In this article on the Huawei Y9 2019 review, we ascertain its pros and cons. Here you would also find info on specs and price 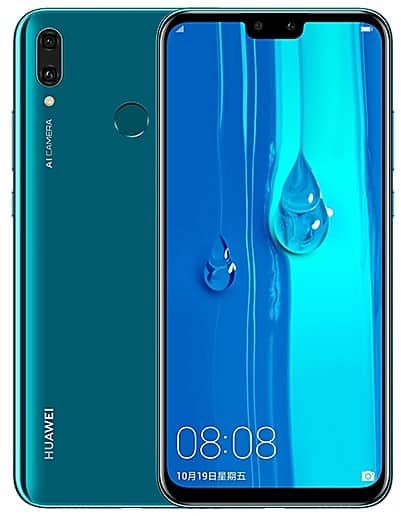 The positions of the other things like the function buttons are all in their original positions like you still find the power button & the volume rockers on the right side of this smartphone. While on the backside of this smartphone you will see the dual primary camera though vertically placed this time unlike the Y9 2018. Still, on the back of this device, you will find a LED flash, a fingerprint sensor, and the Huawei’s logo.

On the front side of this smartphone, we have a dual selfie camera and other sensors. The front side is also well rounded to give this device an aesthetic look and a premium feel. This smartphone also added a responsive face-unlock, for security measures.

The Huawei 2019 has a body dimension of 162.4mm for the height, 77.1mm widths, 8.1mm for the thickness and 173 g for the weight. This smartphone blew in with three color options the Midnight Black, Sapphire Blue, and the Aurora Purple.

The Y9 comes equipped with a 16MP lens with a second 2 Mega-pixel lens which serves as a depth sensor. The efficient AI cameras which are now the trend is able to automatically recognize a scene and automatically adjust the camera’s setting in other to produce the best and well-detailed shots.

The selfie cameras also come in with similar camera setup, a 13-megapixel lens and another second 2 Mega-Pixel lens which also serves as a depth sensor. The cameras were able to give us some decent shots, though they were few occasions where the AI does things in excess the blues and greens seem to be too much, though it happens on rare bases.

The Huawei Y9 2109 blew in with the Android 8.1 Oreo coupled with EMUI 8.2. EMUI is now modified. For instance, though this device doesn’t come with an app drawer, you can still enable it from within the settings. Other features that the EMUI comes with includes the ability to turn your phone into a wifi extender. You can also change your screen resolution in other to save battery, built-in app lock, and screenshot gestures and even.

The Huawei Y9 2019 is powered by a Kirin 710 processor that is assisted by a 4GB of RAM that delivers an excellent keeping everything going smoothly. The Huawei Y9 2019 has an internal memory of 64GB, which can be expandable up to 400 GB via MicroSD.

The Y9 2019 is powered by a 4000mAh battery. On average use, I was able to obtain over 9 hours of screen-on time, and most times got over 10hrs.  The usage includes both wifi, with my brightness on auto and location constantly on. When you change to a full day of mobile data usage, you would have around 8 hours of screen-on time.

nice battery, but sadly, just like the Y9 2018, Y9 2019 battery does not support a fast charging technology.

Huawei’s new smartphone, Y9 2019 enter’s the market with a low price tag of 230 USD which is equivalent to 83,900 Naira. Nigerians can purchase this smartphone from an online store like Konga, Jumia or anyone of your choice. You can also any Huawei distributor around your region.

Take a cue from this Huawei Y9 2019 review, you will discover that the Huawei Y9 2019 has become one of the mid-range smartphones that have stolen my heart this 2018. It arrives with a large display that has given me a new viewing and gaming experience. It also comes with a decent performance and the cameras the Night mode feature to be precise is quite amazing.

Apart from few hiccups like the slightly inaccurate face unlock, the Huawei Y9 2019 is a perfect mid-range smartphone. It also comes with everything that you can possibly demand in a smartphone.