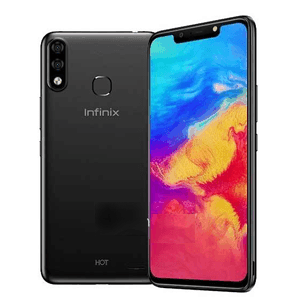 From the physical appearance, you will find out that no much has changed on Hot 7 Pro, because it almost features the same structure as the Infinix Hot 7, which was announced on alongside with Hot 7 Pro in March 2019. Carefully go through our review to know all the differences, features and specifications of the Hot 7 Pro.

The first time I saw the Infinix Hot 7 Pro, I could not tell much difference between it and the Hot 7 except for the dual camera which it now comes in with. When I realized this was the Hot 7 Pro, then I knew most of the upgrades would be internal.

The Hot 7 Pro also comes in with a notch which houses the single selfie camera, the LED flash, the loudspeaker and other sensors on the smartphone. Nothing much has physically changed. On the back of the smartphone, we still have the same setup except for the vertically placed dual primary camera which is also accompanied by a LED flash.

The rear-mounted fingerprint sensor, the 3.5mm jack, the charging port, the volume rocker, the power button and other physical aspects of the smartphone still retains their ancestral position.

The smartphone didn’t feature water and dust resistance because there was no IP rating. The smartphone comes in four different color options and they consist of Gold, Gradient Purple, Black, and Rose Gold.

This is where you will find the physical changes on the Hot 7 Pro. The smartphone arrives with a dual primary camera which is made up of a 13 MegaPixel + 8 MegaPixel. The primary camera also has a LED flash that will ensure you still have a clear and bright image even in low light conditions.

The selfie camera still has the 8 Megapixel lens which was featured on the Hot 7. It also has a LED flash which will also help to achieve a brighter and a clearer image even in low light conditions.

Though the Infinix Hot 7 Pro was not able to feature many physical differences from the Hot 7, nevertheless, as I earlier mentioned, the performance is where the difference and upgrades were featured, though internally nothing much has also changed.

The Hot 7 Pro is still powered by the MediaTek MT6580P composed of Quad-core 1.3GHz for the CPU and the Mali-400 GPU for photography which is the same chipset composition as found in the Hot 7.

The internal difference in this smartphone is in the RAM and storage options. The Infinix Hot 7 Pro comes in with a 32GB worth of internal storage, while the Hot 7 was just 16GB. Also, the Hot 7 Pro arrives with a 3GB RAM which works with the chipset for effective multitasking. Just like the Hot 7, you can still expand the storage of this smartphone up to 128GB using a microSD card.

The smartphone runs on the latest software by Infinix (XOS Honeybee 4.1) which is based on Android 8.1 Oreo Operating System.

The Infinix Hot 7 Pro was able to deliver very well when it came to power. The smartphone comes in with a huge 4000 mAh Non-removable Li-Ion battery which can offer you up to 30 hours of Talk time and up to 380 hours of standby, which is quite impressive.

Honestly, It hots me to know that it is very difficult to actually differentiate between the Infinix Hot 7 and the upgraded Infinix Hot 7 Pro. The question now is what was the essence of Infinx coming out with the said upgraded smartphone when it features almost the same specs as the Hot 7.

Apart from the RAM which was a little bit increased, the dual primary camera and the storage option which was also increased, everything on the smartphone remains the same. You still find the 6.2-inch display, the 4000 mAh battery, the same rear-mounted fingerprint sensor, and a host of other similar specs.

But, if you want a budget smartphone that can deliver on all the basic tasks that you throw on it, then you can consider the Infinix Hot 7 Pro