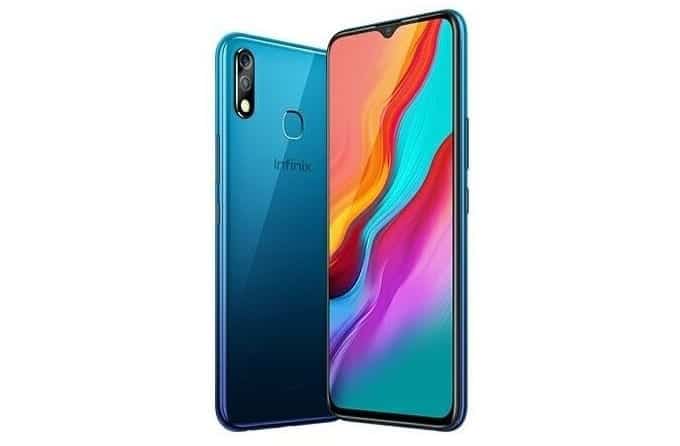 Without any further ados, below is our review of the new smartphone after a few weeks of spending quality time with the smartphone.

Despite not arriving with all the good side of the Standard Infinix Hot 8, when it comes to design, the Hot 8 Lite is amazing.

The new smartphone is made of a Premium Plastic body build, while the front is made up of glass. The Infinix Hot 8 Lite was still able to arrive with the same tear-drop notch found on the standard Hot 8.

There is no doubt that the Infinix Hot 8 Lite has bezels but you can see they are now razor bezels; really ultra-slim. Just like the bezels, the tears drop notch is also slim, holding the single selfie camera, the earpiece on top of the selfie camera and other sensors on the notch. The smartphone has a body dimension of 165 x 76.3 x 8.7 mm and weighs 175g (6.17 oz).

Unlike the standard Infinix Hot 8, the Hot 8 Lite arrives with just Dual primary camera accompanied by an LED flash for a brighter and clearer shoot even in low light conditions. Still, on the back of the smartphone, there’s a fingerprint scanner above the center with the company’s name written beneath the fingerprint sensor.

The screen uses the 2.5D Curved Glass, XOS v5.0 Cheetah for Scratch Resistant. The volume rocker and power button on the Hot 8 Lite are located on the right side, while the left-hand side of the smartphone contains the Memory and SIM card tray.

The Infinix Hot 8 Lite is presented in many beautiful color options. You can decide to go with the Quetzal Cyan, Midnight Black color, Shark Grey or the Cosmic Purple.

The dual primary cameras are vertically positioned on the left-hand side of the smartphone with a LED flash that helps illuminate objects and assists the camera in taking impressive images even in a low light environment.

On the front of the smartphone inside the teardrop notch which is seated on top of the screen, you will find the single 8-megapixel selfie camera shooter with a powerful LED flash that allows the images to be well detailed even in low light conditions.

The performance of the Hot 8 Lite is nothing really special, nevertheless, most people may still find it okay. Please remember that the ‘LITE‘ at the end of its name simply means that you shouldn’t be expecting anything really heavy or much from this device.

Naturally, Lite versions are usually underperforming than their standard model, but as I said before, the performance is okay. Powering the Hot 8 Lite is a Quad-core Mediatek MT6580P Helio A22 processor which runs at 1.3GHz. You also have the Mali-400MP which handles the graphics performance.

Unlike the standard Hot 8, the Hot 8 Lite comes in just one version which is the 2GB RAM with a 32GB for all your storage purposes. The internal storage can further be expanded up to 128GB through the use of the microSD card.

The Infinix Hot 8 Lite runs on the company’s software, the XOS 5.0 which is based on the almost outdated Operating System, the Android 8.1 Go Edition. For your security, you have the Face ID, fingerprint scanner and pattern or codes.

Unlike the standard version of the Hot 8 which supports a 4G LTE network, the Hot 8 Lite does not support 4G LTE.

Powering the Hot 8 Lite is still the same Non-removable Li-Po 5000 mAh battery which was found on the standard hot 8. This time around, the smartphone brings along 10W fast charging which helps add extra battery juice faster than the normal one.

Mind you, you will not be getting any wireless charging technology as the smartphone was not built to support it.

One of the reasons why most people will not be too worried about the watered-down features and specifications of the Infinix Hot 8 Lite is because of the low price tag it bears.

You can easily purchase this smartphone from most online stores such as Jumia, Konga, and others. You can also decide to get the smartphone from any authorized Infinix distributor around your region.

When it comes to considering whether to buy this smartphone or not, I will suggest that you first know what you want in a smartphone before you can start declaring your interest to purchase a smartphone.

If what you want in a smartphone is a long-lasting device, big screen, moderate cameras and performance, and a budget smartphone, then the Infinix Hot 8 Lite is the smartphone for you.