The Infinix Hot 8 has finally entered the Nigerian market after being launched in India in September 2019. The new budget smartphone happens to be the first Infinix Hot Series smartphone to arrive with a jumbo size 5000 mAh battery capacity which is a welcome development. 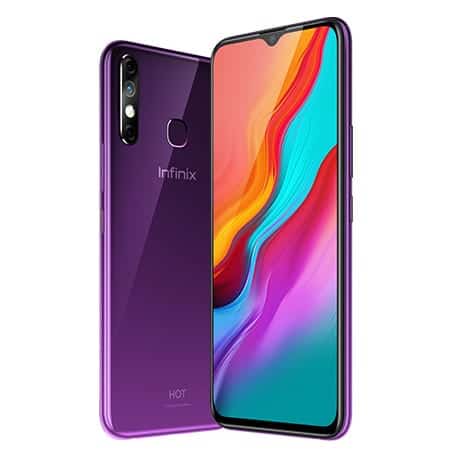 Infinix has been able to set another landmark in the history of budget smartphones in Nigeria with its Hot 8.

It is also important that you note that the Tecno Hot 8 has two versions; the Asian and African versions both arriving with slightly different internals.

Apart from the battery, there are other fascinating specifications and features you can find on the newly released entry smartphone. Without any further ados, we would like to show you the good side and the ugly side of the newly released smartphone which in turn, will help you with your purchasing decision. So, let’s get it on…

Most people will argue that it’s a glass back, but it’s not; it’s a Premium Plastic back which gives you a glass feel. The only glass on the Infinix Hot 8 is its front screen, while the frame is aluminum. Overall the design of Hot 8 is something that applauding.

On the front side of the Hot 8 seats the hug 6.56-inch tear-drop notch display which employs the help of a 2.5D glass for protection. You will certainly enjoy your viewing experience on the LCD IPS display coupled with its 720 x 1600p resolution and 450nit brightness capable of shinning well even when you are outdoor.

Must Read: Infinix Smart 3 Plus Review – Specs, Features, and Price

The Hot 8 was able to boast up 90% screen to body ratio and a 20:9 aspect ratio. The teardrop notch on top of the screen is where you find the single selfie camera accompanied by an LED flash. On the notch, you will also find the earpiece and other sensors.

When you turn to the backside of the smartphone, you will discover the triple vertically placed camera shooters on the left-hand side. The fingerprint sensor is also located at the back of the smartphone and it’s responsive. It is slightly positioned above the center, while below it is the company’s name.

The loudspeaker of the Hot 8 features a DIRAC stereo widening Technology which helps to produce quality sound. It is located at the bottom of the smartphone alongside other things such as the 3.5mm headphone jack and micro USB port.

If there is anything I enjoyed about this smartphone apart from the battery, it is the cameras. The Infinix Hot 8 has a total of four front and back cameras.

The Hot 8 selfie camera has portrait mode, WideSelfie, and AI beauty mode. You will also find the AR stickers with motion-detecting Technology.

Though the Quad-cameras is anticipated to soon become a trend, the Hot 8 was able to bring us the current camera trend which is the triple primary camera shooters.

When you turn to the backside of the smartphone of the Hot 8, you will find the vertically placed camera module containing three (3) primary cameras. The triple cameras are made up of a 13MegaPixel which is the lead shooter, a 2-MegaPixel shooter for depth sensing and a QVGA dedicated Low light sensor.

Just like we mentioned from the beginning, there are two versions of the Hot 8; the African version and the Asian version.

For the African version, you are presented with the Quad-core Mediatek MT6761 Helio A22 chipset which runs at 2.0GHz and is quite impressive in performance just like its Asain counterpart. The African version is blessed with a 2GB RAM and 32GB internal storage.

The Asian version of the Hot 8 is powered by an Octa-core Mediatek MT6762 Helio P22 processor which also runs at 2.0GHz and is supported by a 4GB RAM and 64GB internal storage.

Like we mentioned before, the Infinix Hot 8 arrives with a huge battery life that allows you to enjoy every bit of the smartphone for a very long time.

Powering the Hot 8 is a 5000mAh Non-removable Li-Ion battery which can sure offer you up to 28 hours for Talk Time, 31 hours for music playback, and 480 hours for Stand-by mode.

We were anticipating that the Hot 8 might likely arrive with fast-charging technology, but we were not surprised when we couldn’t find the feature after all the price in which the smartphone arrives is a steal.

Apart from the Fast Charging feature which is absent, you will also not find the Wireless Charging technology feature on this smartphone, but it’s okay since it was able able to make up for that by offering the users such a huge battery life.

Just like I have been ringing it all this while, and will continue to ring it, “The price of the Infinix Hot 8 is a steal”.

In Nigerian currency, you can get the Infinix Hot 8 for about N 35, 114 which is approximately equivalent to $97 at the time of writing.

You can purchase this smartphone from many Nigerian Online stores like Konga, Jumia, and others. Or you can still buy this device from any authorized Infinix smartphone dealers near your region.

The Infinix Hot 8 seems to be among the most impressive budget smartphones that I have been able to come across in a long while.

It offers great cameras with fascinating features, very huge battery life, outstanding design and an okay performance all for a very small fee of about $97. But, like I stated before and will continue to state, the Infinix Hot 8 is a steal.