Infinix which happens to be one of the Chinese Smartphone makers who has won the heart of many African is back with another interesting smartphone. The company introduced the much anticipated Infinix Note 6 A.K.A the Infinix X610. The smartphone which was officially announced this July 2019 and will be on sale in major countries in Africa before the end of July 2019. In this article, we look at the Infinix Note 6 Review, exploring the specs, features, and price of the Infinix Note 6. 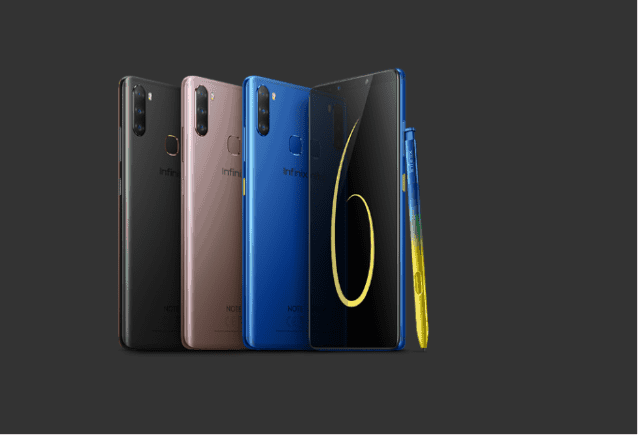 The new smartphone arrives with so many exciting features that have got so many people talking. The smartphone is a force both in performance and design. The Infinix Note 6 is a successor to the Note 5 and is indeed a worthy successor.

One of the selling points of the Infinix Note 6 is its sleek and adorable design. As a matter of fact, Note 6 was able to tick all the right boxes when it comes to design.

Some of the exciting features that the Infinix Note 6 comes in with includes; a long-lasting battery, large and impressive display, nice cameras, and the AI-powered X-Pen.

The Infinix Note 6 is constructed with a glass front and a metal chassis with a subtle curve on the edges. The metallic chases help resist fingerprints and protect the smartphone against minor scratches. It has a thinner shape than its predecessor, though is to the detriment of the battery.

The new device is the first Note series, as well as the only Infinix phone with an AMOLED screen. The display is a 6.01 inches screen with a 1080 x 2160 pixels which was able to achieve an 81.1% screen-to-body ratio.

Despite having all these good qualities, there are still other old features we didn’t expect the Note 6 to come over with such as the chunky bezel on the top and bottom of the smartphone, though not as prominent as those found on the iPhone 8.

Still on the back of the new smartphone, seats the responsive and centrally placed fingerprint sensor. There is a power button and volume rocker keys on the right side of the device, while the microSD card tray and SIM tray are on the left side of the smartphone.

The revamped AI-powered X-Pen is placed under the bottom edge where you will also find other components such as the down-firing loudspeaker, a micro USB port, a microphone, and the 3.5mm audio jack.

The camera is one of the outstanding features of the Infinix Note 6. It also carried on the good works from the Note 5, and it produces good images with lots of details.

There are a total of four cameras on the Tecno Note 6 with one powerful single selfie camera seated on the top bezel and the remaining three are situated at the back of the smartphone.

The front-facing camera is a 16-MegaPixel camera sensor which produces decent images with enough details. The camera will still perfectly deliver even in low light condition, though some people find the images produced by the front camera to be over-processed. The camera adds various color filters when in AI mode resulting in a saturated image production.

Meanwhile, the back of the Note 6 holds the triple cameras that comprise of a 16MP which is the main shooter. It is assisted by an 8MP wide-angle lens and the 2MP for depth sensor.

The primary cameras produce great images with sharp colors and enough details. The wide-angle lens comes in handy should in case you want to capture more fields in one shot. Portraits mood looks better and even without a LED flash, the cameras still gives you a well colored and detailed shot.

We noticed that there is usually plenty of noise when you zoom in images. Secondly, we couldn’t find any image stabilizer to balance out small camera shakes. This means that you need steady hands when taking shots with the Infinix Note 6.

The Infinix Note 6 was able to deliver very well in terms of performance of the smartphone. The smartphone was slapped with a 4GB RAM which will confidently handle multitasking.

For storing your personal files you are presented with a 64GB internal storage which can be further expanded by up to 128GB using a micro SD card.

Powering this powerful new smartphone is a Mediatek MT6765 Helio P35 chipset which has 8 cores which runs at 2.3 GHz. For graphics and all your gaming performance, you have the PowerVR GE8320.

Just as we expected, the new smartphone runs on the latest Operating System which is the Android 9 (Pie) with the Infinix XOS on top of the matter.

The smartphone supports 4G LTE and allows you to download files with a speed up to 150 Mbps. If you reside in Nigeria, then the 4G LTE will be compatible with networks such as MTN, 9Mobile, and Airtel.

Just like we mentioned earlier the new the company stripped about 500mAh battery from Infinix Note 6 leaving it with just 4,000mAh.

Nevertheless, the battery offers you a reasonable amount of hours though you can not compare it with the 4,500mAh found on its predecessor which we considered quite disappointing.

The battery delivers ample hours to run all your daily task with moderate use. It is capable of taking you for three days (3days) straight from a single charge. Still, on top of the matter, the company also blessed the smartphone with a fast-charging tech which allows you to quickly add extra battery juice.

The price of the Infinix Note 6 is not groundbreaking considering its specs and features. It starts at around $200.00 which is about N72600 in Nigerian currency and about UGX 740,000 in Ugandan Shilling. The price is totally depending on the deal and region where the purchase is taking place.

You can purchase this smartphone from Infinix authorized dealers around your region. Or you can better still sweep through some online stores and sellers for a better deal.

But, if you fall under the category of those who like simply like a good looking smartphone capable of taking good images and responding very well then the Infinix Note 6 is for you.

The new smartphone may not be as powerful as the multi-million Note 9, but it’s unique in its own way. But if you still insist on a big-budget smartphone, then we recommend the Galaxy Note 9.