If you had by any means heard about the race devices for Infinix I bet you will love their new smartphone recently released to add to their store Infinix Race Jet X501, and this device is a successor to Race Eagle. You can expect something smooth and fast since it would be coming from infinix. 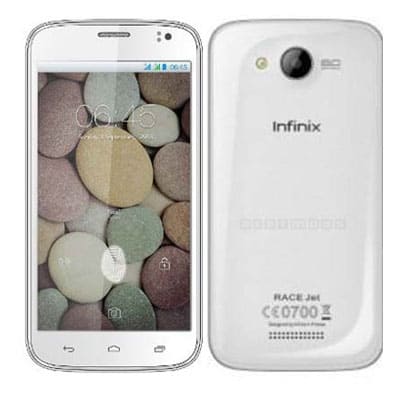 The Infinix Race Jet weighs just 0.776w/kg and the smartphone is 146.8 x 73.5 x 8.8mm in dimension; has a sleek and slender which is very stylish. It is comfortable to hold without putting a weight on the hand. The front aspect of the smartphone is majorly occupied by the screen and the top where you will find the speaker flanked on the left by the front camera. Below the screen are the conventional home, return, and multitasking buttons.

Race Jet has design features that will make you fall in love with the device as it has a glossy cover and the stylishly placed camera at the top. This device is one of the best and finely designed Infinix phones as at time of this review when compared to the list of all infinix android phones.

Race Jet as expected, since the phone is succeeding Race Eagle, it has some performance specs should perform reasonably well that should delight its users. It comes with a 1.2 GHz quad-core processor, and 1GB RAM, which means you should be expecting something faster compared to Sony Xperia M or Tecno S5. So, if you are going for Infinix Race Jet X501, expect a smartphone with a marvelous speed of operation. It supports both 2G and 3G networks and supports Wi-Fi, Wi-Fi hotspot, GPS, Bluetooth 3.0 and micro USB.

Race Jet comes with an 8.0MP autofocus rear-facing primary camera and a 1.3MP front camera to make your capturing experience a delightful one. Well, with 8.0MP, you should know you’ve got a digital camera in your pocket already.

Succeeding Race Eagle this device is the smartphone for you as it offers super-fast experience than it, predecessor, A nice storage space and more importantly its ability to produce nice shoots with a nice camera it comes with. It assures that it won’t lag on normal apps running on the device. Infinix android phones are quite nice for the buck.