Here we are with another smartphone from Infinix and it’s tagged, Infinix Smart 2 HD. The new smartphone runs on the Android 8.1 Oreo (Go Edition) and comes with other nice features like the Face Unlock, 3500mAh battery, and fingerprint sensor scanner. 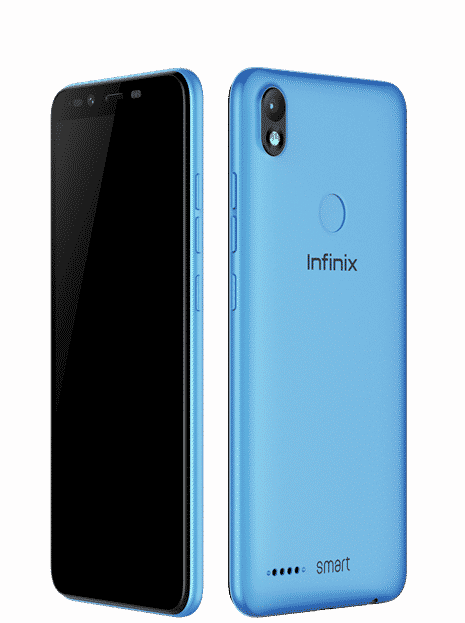 The Infinix Smart 2 HD was both announced and available in October 2018 and was officially launched in Pakistan. Infinix mobility is gradually expanding their portfolio with their Smart series. Infinix also made promises of a smarter and a better device with great features, design, and specifications.

Infinix Smart 2 HD features good-looking, stunning and a premium body, which is optically appealing. The first thing I notice the first time I set my eyes on this smartphone, was the bezels that are now trimmed down.

At the front of this screen is a moderate 6.0? LCD IPS TFT HD together with Infinity Display, which displays graphic images, videos, and all colors combined together. The screen also has an 18:9 aspect ratio which offers smaller bezels at the top, after they said it’s a notchless Android device. Meanwhile, the screen-to-body ratio is 83%.

Infinix Smart 2 HD has a screen resolution of 1440 x 720 pixels, which for an affordable mid-range smartphone it’s not bad. At the back of this device, you will find a single primary camera accompanied by a LED flash. The back of this smartphone still houses the Infinix logo and a fingerprint sensor. Other hardware function keys remain in their ancestral position.

The Infinix Smart 2 HD arrives with a total number of two cameras. The back of the back of this device serves as a home for the 8-megapixels single camera sensor. The primary camera supports video recording and has a LED flash for a brighter image in low-light conditions.

Meanwhile, the front-facing camera AKA selfie camera has the same 8-megapixels, a LED flash and can offer a 3284 x 2472 Image size. The company made claims that the selfie camera takes better shots even in low light conditions.

There is another amazing feature of the front-facing camera and it’s the ability for it to also double as a Face Unlock camera. That is to say for security, you have both the fingerprint sensor and the face unlock camera to secure your smartphone.

There is also a 16GB of inbuilt memory for storage and a 1GB RAM for your multi-tasking purposes. Don’t get disturbed by the storage because it can still be expanded with the use of a MicroSD card slot which supports up to 128GB MicroSD card, just in case if you need more storage space.

The Infinix Smart 2 HD comes with a powerful 3500mAh battery capacity, which charges through 5V-1.2A output. This battery capacity is the highest that the Smart series currently offers.

What Smart 2 and Smart 2 Pro was able to offer was 3050mAh and 3060mAh battery capacity respectively. The battery boasts 32hours talk time and 35 days of standby.

The Infinix Smart 2 HD comes with an affordable price tag, this device is sold for about 12,999 Pakistani Rupees and that is approximately about $94. This smartphone is available on some online stores like Juma Konga and others that can deliver the smartphone around your region.

Overall, the Infinix Smart 2 HD is a very nice smartphone with lots of features that make it one of the best mid-range phone. But the smartphone will be more suitable for those who want power over performance. Unfortunately, the 1GB RAM makes this device not suitable for gamers and intensive smartphone users.