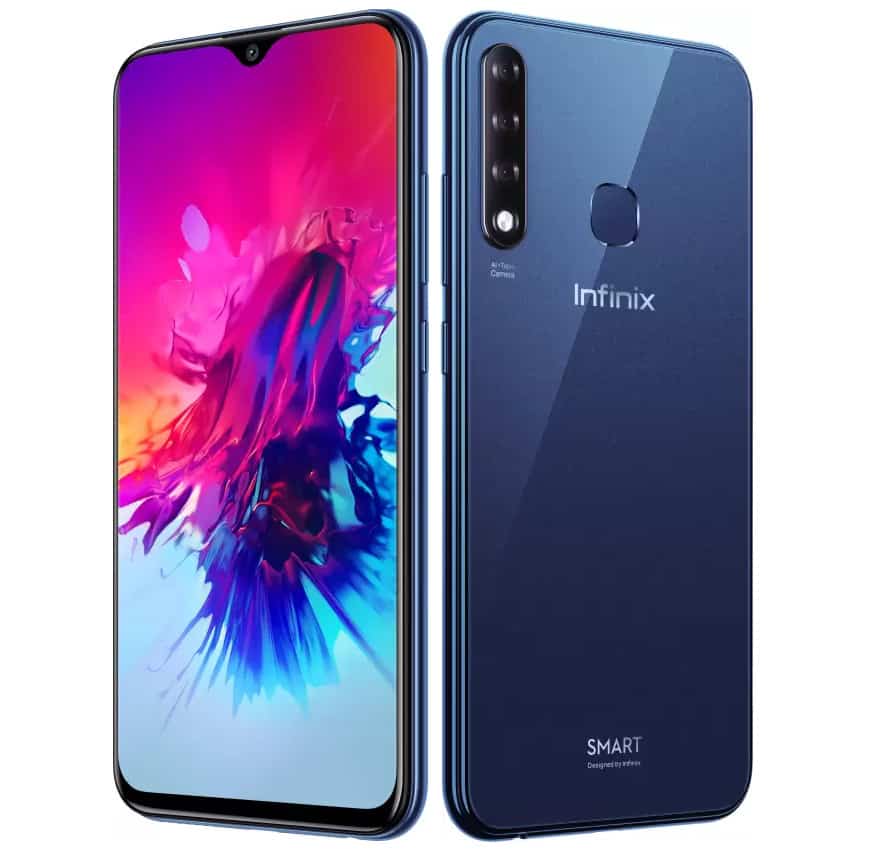 The Infinix Smart 3 Plus is the successor to the Infinix Smart 2 Pro and it ships in with lots of major upgrades and other mind-blowing specs which seems to be too good for a smartphone of its range and price. Hang on with us as we go through the smartphone and revealing both its selling points and its weaknesses.

The Infinix Smart 3 Plus comes in with an optically appealing design which gives it a premium look and feels. The smartphone’s body is made of plastic, though from a distance, you could mistake it for glass.

It arrives with a water-drop notch which holds the single selfie camera sensor which is comfortably seated on top of the screen. The front of the smartphone is occupied by a very large 6.4-inch HD+ display with a 19.5:9 269ppi pixel. The Infinix Smart 3 Plus rocks a 2.5D glass for protection and boast of an 88% screen-to-body ratio.

At the bottom of the screen, there is a small amount of chin, while the top and sides feature well-trimmed bezels.

On the back of the Infinix Smart 3 Plus, you will find the trending triple camera sensors and a powerful LED flash all vertically positioned at the left-hand side. You will also find the rear-mounted fingerprint sensor with Infinix logo below it.

On the right-hand side of the smartphone, you will still find the volume rockers and the power button, while the left side is where the dual Nano SIM slot resides. We were happy to see the smartphone arrive with our lovely 3.5mm jack.

The Infinix Smart 3 Plus brings along just two different colors at the time of writing and the colors are Sapphire Cyan color and the Midnight Black color option.

Infinix Smart 3 Plus brings in a total of four cameras which consist of the single selfie camera on the front and the triple camera set up at the back.

On the front, you will find the 8-megapixel single selfie camera sensor hidden in the dewdrop notch. It produces detailed images and also brings with it some interesting features like the Face Unlock, AI Beauty mode, and the screen flash.

When you turn over to the back side of this smartphone, you will find the triple camera set up which is accompanied by a powerful LED flash that help illuminates on its subject to produce a well-detailed image even in low light conditions. The primary camera comprises of a 13-megapixel sensor with an f/1.8 aperture, an 8-megapixel sensor and finally, a 2MP depth sensor camera.

All the cameras on the Infinix Smart 3 Plus are AI-enhanced and they all come with interesting camera features such as the auto scene detection, Dual-LED flash, AI scene, AR Stickers, PDAF, and others.

Powering the Infinix Smart 3 Plus is a MediaTek Helio A22 12nm processor which runs at 64-bit 2GHz Quad-Core processor. The smartphone also houses the IMG PowerVR GE-class GPU in charge of graphics.

For your storage purposes, the smartphone comes in with a 32GB internal storage option. If the storage option will not be enough for your files, you can further expand it up to 256GB via an external microSD card using its dedicated microSD card slot.

The smartphone runs on the latest Operating System, Android 9.0 (Pie) which is based on Infinix’s XOS 5.0 out of the box.

The Infinix Smart 3 Plus comes in with an interesting 3,500mAh battery capacity, which promises to deliver 25 hours of talk time on 4G, 10 hours of video playing, 34 hours of music playback and a whopping 25 days of standby time according to the company (Infinix).

Like we earlier mentioned, the Infinix Smart 3 Plus is a budget smartphone. The company has announced the starting price of the smartphone to be Rs.6999 which is approximately $100 (N36,000 Naira).

Should in case you are interested in obtaining the device for yourself, you can start doing that via Flipkart from April 30.

The introduction of the Infinix Smart 3 Plus shows that Infinix is now ready to take over the budget smartphone market and you can see that at the price (approximately $100) in which the new device come in with.