Have it at the back of your mind that Innjoo Leap 4 happens to be the fourth iteration of Innjoo’s line of affordable Windows tablets and a direct successor of the Innjoo Leap2. Also known it that Innjoo Leap 2 packs almost the same specs and features. 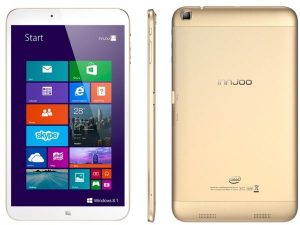 But it has slight different specs such as a bigger battery, a more responsive touchscreen, autofocus for the rear camera, and an all-new HDMI port. Hence, Innjoo Leap4 still comes with eye-catching qualities that will really catch the minds of people.

It is a pleasure we make it known to you that the Innjoo Leap4 comes with a slightly more refined design. Know it that the smartphone comes with a button and volume rocker. It also has a flatter design, which is said to look easier to manipulate.

Furthermore, have it at the back of your mind that Innjoo Leap 4 has a slightly slimmer body than the Leap2. Know it that the Sim slot is situated by the sides of the device, the back is probably sealed.

Talking about the performance of this great device, we came to find out that the Innjoo Leap 4 sports the same 1.33GHz Intel Bay Trail quad-core processor, Intel HD Graphics, and 1GB of RAM.  Same time it is also packaged with a whopping 16GB built-in storage which can be expanded up to 64GB with the help of a Micro SD Card.

The newly launched smartphone Innjoo Leap4 also offers Windows 8.1 OS and a one-year free subscription. You can be able to subscribe to Microsoft Office 365 for fast creation, editing, and viewing of Word, Excel, and Powerpoint documents respectively.

Having gone through the smartphone, we discovered that the Innjoo Leap4 has an 8.0-inch IPS Touchscreen with 800 x 1280 pixels resolution. Innjoo Leap 4 is been packaged with a Primary camera of 5 megapixels rear camera and a front facing camera of 2 megapixels camera, which also comes with autofocus for the rear camera.

Innjoo is really doing all they can to make sure they put smiles in the faces of their respective customers with their amazing battery capacity. Innjoo Leap 4 comes with a monster battery capacity of 4500mAh under the hood.

The 4500mAh is supper capable to carry out the day to day activity of this amazing device. If you are a game freak, Music lovers, this battery capacity got you back. It lasts longer when it is been fully charged.

If you really want to get this smartphone for your self, have it at the back of your mind that you can get the amazing device via our online/offline stores at a price tag of $130 and over 40,000 in Nigeria.

Innjoo Leap 4 has all it takes to make sure you are comfortable considering its amazing specs and features. Give it a try, you will really love it.