Here comes another smartphone called the Innjoo One 3G HD, which will which was launched on February 11, 2015. And we are here to give you a detailed review of this smartphone. 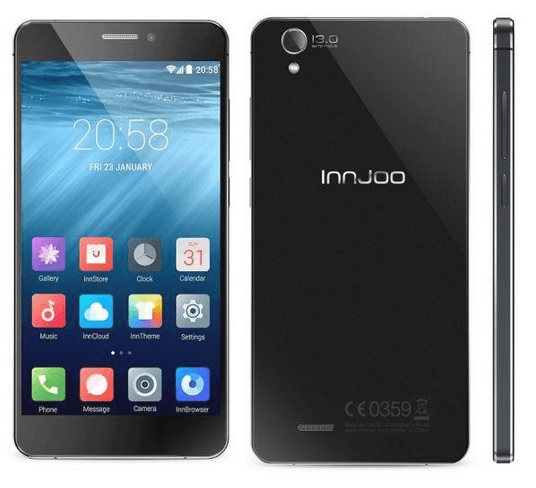 The Innjoo One is available in both 3G and LTE models, but the 3G model will be the only one available to those in Nigeria. The Innjoo One features a premium look and feels, while still arriving at an affordable price.

Innjoo One is equipped with a 5-inch IPS display, that has a resolution of 720 x 1280 pixels. The color reproduction is also accurate.

The body of Innjoo One is made of a metal frame, tough Dragontrail Glass covering the front and the back. This device is light Weighted (weighs 123 g) and really slim.

The bezels on the Innjoo One is slim, making the display the center of attraction. Below the display, you will find three capacitive touch buttons for navigation, they are not visible until you press them while the phone is not locked. And above the screen is the earpiece and the selfie camera.

On the right side of this device, you will see the volume rocker and the power button for turning off, turning on, or unlocking the phone.

The back of the Innjoo One features a glass cover that has ‘Innjoo’ written around the middle. While on the top left corner is where the primary camera and LED Flash is. The loudspeaker is positioned at the lower left corner.

On top of the Innjoo, One is where you get the 3.5mm jack, while the mouthpiece and micro USB port are placed on the bottom side.

This smartphone ships in with a 13 megapixel for the primary camera and 8 megapixels for the selfie camera. The primary and secondary cameras are capable of recording 1080p HD videos.

The front camera is actually nice for taking selfies or for taking wefies with your family and friends. Meanwhile, the primary camera offers great shots with great color accuracy. The camera also comes with other features like the HDR, face detection, voice capture, smile shot, and a LED flash.

The Innjoo One features a 1.7GHz octa-core processor accompanied by a 2GB RAM. It also comes with a 16GB internal storage, that is expandable up to 64GB via microSD.

This smartphone also comes with 8-cores, though all cores are not ‘On‘ all the time, this device makes use of the right amount of cores in other to efficiently handle the prevailing job(s) at hand. This is why the Innjoo One is power efficient and maybe why the phone does not heat up so much.

The LTE models chipset features a 64-bit architecture, while the Innjoo One 3G HD (the model for Nigeria) uses the 32-bit chipset, the Mediatek MT6592.

This smartphone runs on Android 4.4.2 (KitKat), with Innjoo’s own UI skin called the InnOS. The interface is minimalist, clean and easy to use.

To unlock this smartphone, press the power button and swipe the lower left corner of the screen to the right-hand side. You can still use the ‘double tap to unlock‘ feature in settings.

The InnOS UI puts all the app front and center, most Apps like the InnBrowser, InnCloud, InnStore, and the InnTheme are well known with Google Apps like the Google Play Store, Voice Search, Gmail, etc, all lumped up as a collection.

The InnJoo One 3G HD is equipped with a You 2600mAh Non-Removable battery, that can offer you not less than 9 hours of surfing the internet, playing music and watching videos.

The InnJoo One 3G HD comes in with a very low price tag of 77 USD (N28,000 Naira). You can purchase this device from online stores or any authorized Innjoo distributor near your region.

The InnJoo One 3G HD looks like an iPhone but with a lower price tag. This smartphone is actually a steal if you ask me because, even with the low price, it still arrives well put together, capable and serves as an all-day companion. The only flaw is its camera and operating system.