Lenovo finally announces the arrival of its new smartphone today in China. The new smartphone, Lenovo Z5 Pro ships in with the trending latest features such as the slider mechanism design, in-display fingerprint sensor scanner, 95.06% screen-to-body ratio,  and many more. 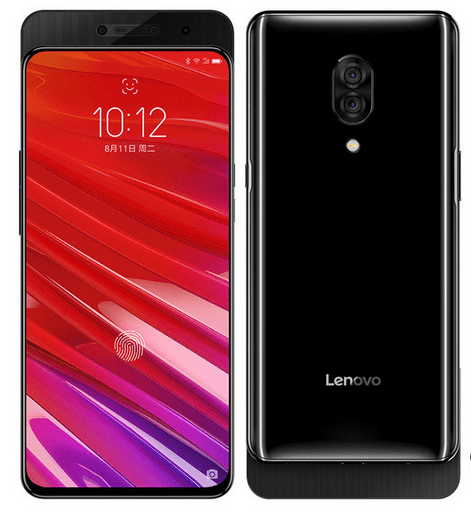 The Lenovo Z5 Pro was both announced and will be released in December 2018. The smartphone uses slidder to avoid the display of notch, and we are thankful to both Oppo Find X and Vivo Nex for introducing such unusual tactics.

The Lenovo Z5 Pro is an upgrade to the previously released Lenovo Z5. The smartphone features a better design than its predecessor, and it’s one of the cheapest sliding Smartphone out in the market.

The new smartphone will be arriving available in black color configuration and an on-screen fingerprint sensor scanner, which is one of the reasons I fell hard for this device. This means no more rear-mounted fingerprint scanner.

On the front of this new smartphone, you will find a 6.39-inch Full-HD+ Super AMOLED display with Corning Gorilla Glass 5 panel for protection and a 19.5:9 aspect ratio. The Lenovo Z5 Pro is a mid-range smartphone and though many sliding smartphones has been launched, this smartphone only ships in with mid-range specs.

Apart from the disappearance of a notch, the top and bottom bezels have also been drastically reduced. Apart from the flagship specs, the price is also actually on point.

The Lenovo Z5 Pro design is totally against the pop-up cameras Smartphone just like the Xiaomi Mi Mix 3 and Honor Magic 2. Though there are still those dual front-facing cameras, while the other is an infrared (IR) sensor for facial recognition.

The smartphone has a dual camera setup, an 8-megapixel IR sensor and another 16-megapixel sensor with an f/2.2 aperture. Guess what, the selfie cameras have been configured and equipped to take beautiful and spectacular shots.

Over to the primary camera, which is a 1.22um 16-megapixel Sony IMX519 camera sensor + another secondary 0.9um 24-megapixels camera with Sony IMX576 sensor, suitable for low-light photography and it also uses the pixel binning. The camera also supports a 4K video capture but lacks super slow motion mode. The two cameras come with dual-tone LED flash and an f/1.8 aperture.

Lenovo Z5 Pro is powered by a mid-range chipset, and that’s the Octa-core Qualcomm Snapdragon 710 SoC, coupled with 6GB of RAM, which is sure to provide you with faster performance and smart optimization.

The smartphone comes with a host of sensor that includes:

But under the hood the is powered by a moderate 3350 mAh  Non-removable Li-Po battery,  which is a little bit better than that of its predecessor. One of the reasons I love this mid-range smartphone is because of its adoption of the Fast battery charging technology employed. What that simply means is you can quickly top up your battery juice when the need for that arises.

The Lenovo Z5 Pro is the cheapest smartphone with sliding mechanism and in-display fingerprint sensor though we are yet to confirm if this smartphone will be available outside China.

The Lenovo Z5 Pro comes in with a host of impressive features which seems to be a little bit more than what we expect in a mid-range smartphone. It features the slider mechanism design, in-display fingerprint sensor scanner, 95.06% screen-to-body ratio, 6GB RAM, etc. What more can you expect from a mid-range phone that’s missing?

With all said and done, we have been able to list the features and specifications of this smartphone; it’s up to you to know what you want in a smartphone.