Nokia finally sails through with another super-budget smartphone, the Nokia 3.1 which will be released this May 2018. The Nokia 3.1 which is also known by some people as Nokia 3 (2018), and with the follow-up smartphone trends, we may likely see a Nokia 3.2 or Nokia 3.1 pro before the end of this year. 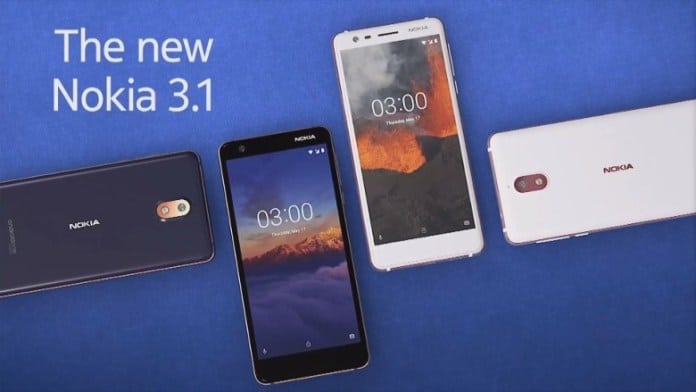 This smartphone comes with some exciting features like the 3GB RAM that is sure to ensure a lag-free experience and a host of other great stuff. Don’t get it twisted, because even roses have thorns. Come with me let’s see if this smartphone is worth considering.

The Nokia 3.1 comes with an anodized metal chassis, a polycarbonate, and plastic-like back cover. The frames of this smartphone are made of aluminum frames. On the back of this smartphone, there is a foundation positioned vertically on the top middle which houses the primary camera and the LED flash.

My expectation about the Nokia 3.1 was cut short when I couldn’t find a fingerprint sensor on this device. This smartphone has a body dimension of 146.3mm height, 68.7mm width,  8.7mm for thickness & 138.3g weight. Nokia 3.1 is also presented in 3 color varieties, Black/Chrome, Blue/Copper, and White/Iron.

The screen of the Nokia 3.1 is a 5.2-inch HD+ IPS LCD capacitive touchscreen, which produces sharp and brilliant colors. It also has a resolution of 720 x 1440 pixels and 310 pixels per inch density, which offers amazing visuals. The screen also produces an 18:9 aspect ratio.

Apart from the camera, the function keys & other aspects of this smartphone retain their original positions.

The primary camera of this device is a 13 Mega-Pixel shooter, with an f/2.0 aperture. The camera captures nice images and retains a reasonable amount of details. Nokia 3.1 comes in with features that helps one take amazing images like the LED flash, autofocus, touch focus and more.

The cameras can record Videos of [email protected] Meanwhile, the selfie camera arrives with an 8 Mega-Pixel shooter that has an f/2.0 aperture.

The Nokia 3.1 comes in with the MediaTek MT6750 chipset assisted by the Octa-Core processor and 64-bit CPU architecture. Meanwhile, the processor’s 8-Cores clocks at 1.5GHz coupled with its 28nm process technology. The Mali-T860MP2 graphics is the processor in charge of all graphics and runs at 520MHz.

Nokia 3.1 is powered by a 2990mAh non-removable Li-Ion battery. One other exciting battery feature is its fast charging technology. The fast charging can offer you a fully charged battery within 1.9 hours.This battery offers you 18 h (3G) for talk time and 84hrs for music playing.

The Nokia 3.1 comes with a price tag of 54 USD which is equivalent to 14,000 Naira. If you would like to purchase this smartphone, you can visit some online stores or any Nokia distributor in your region.

For those in search of an affordable smartphone, the Nokia 3.1 is the device I think you have been searching for. Notwithstanding, for those heavy gamers and smartphone users I think you should opt for another smartphone with a better performance.