The Samsung Galaxy A03S is another budget Smartphone from Samsung in its A-series lineup. If you were considering the A02S, which was obviously better than the A02, then this is the perfect Smartphone and this review will share with you reasons why.

Please note that aside from reading through this review, you can also watch the Samsung Galaxy A03s review on the Oscarmini channel on Youtube.

When you open the package box, you’ll see the Quick Start Guide, the phone itself, a USB C connector, a 15W charger, the Samsung earphones, and the SIM ejector.

That is all you’ll be seeing from within the box. As usual, there’s no TPU case or screen protector from Samsung. 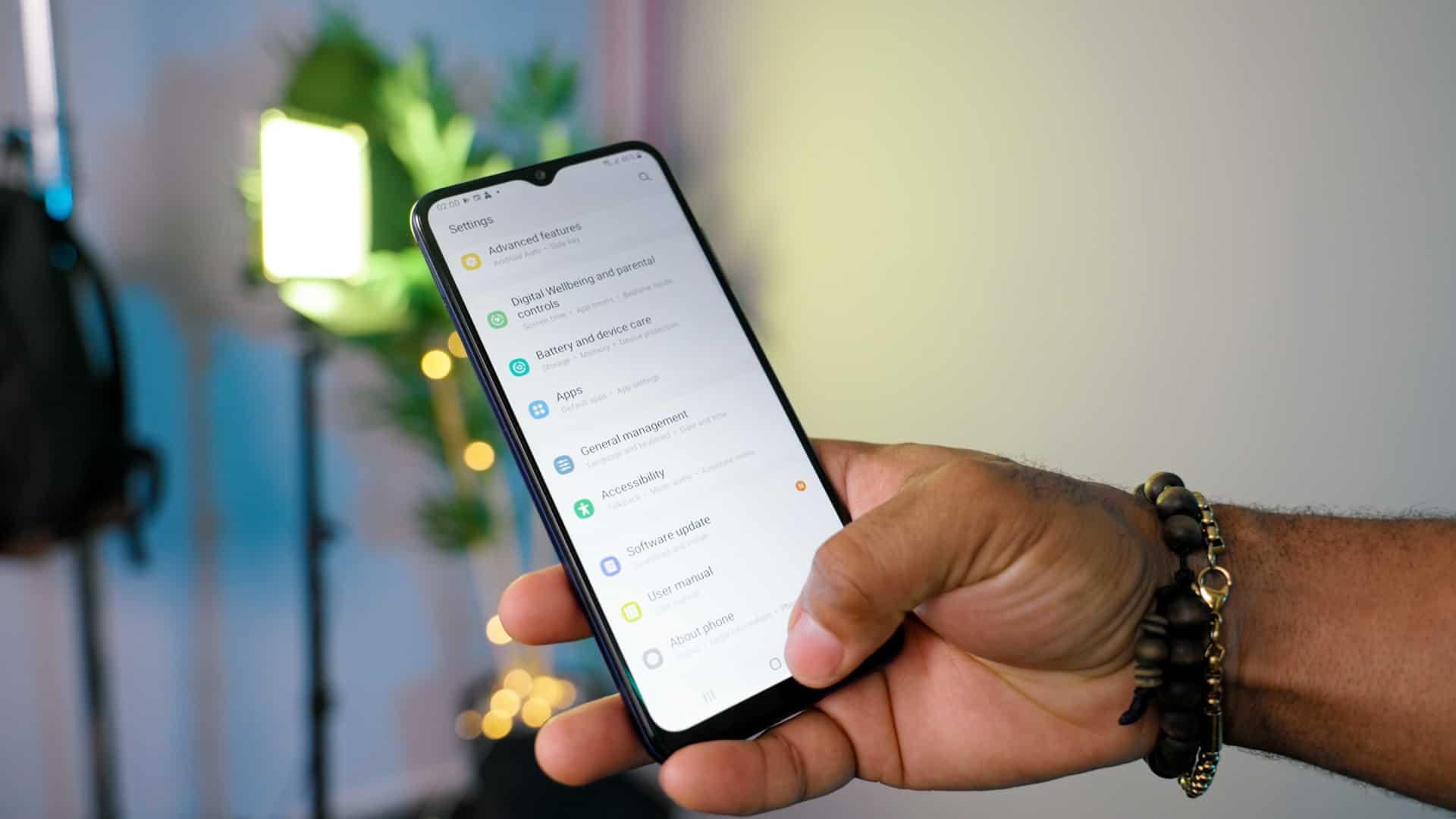 As far as design, there isn’t anything special or out of the norm from Samsung lately. Same pattern as we’ve seen on the A02S, except that you now have a fingerprint scanner, and it is placed below the volume rocker keys to the right. You get the dual SIM trays and a dedicated micro SD card slot to the left.

The top has a secondary microphone while the bottom gives you the audio jack port, primary microphone, USB C port, and mono down-firing speaker. This Smartphone is actually made out of plastic, as expected and it meets 95% of what most people with this budget needs. 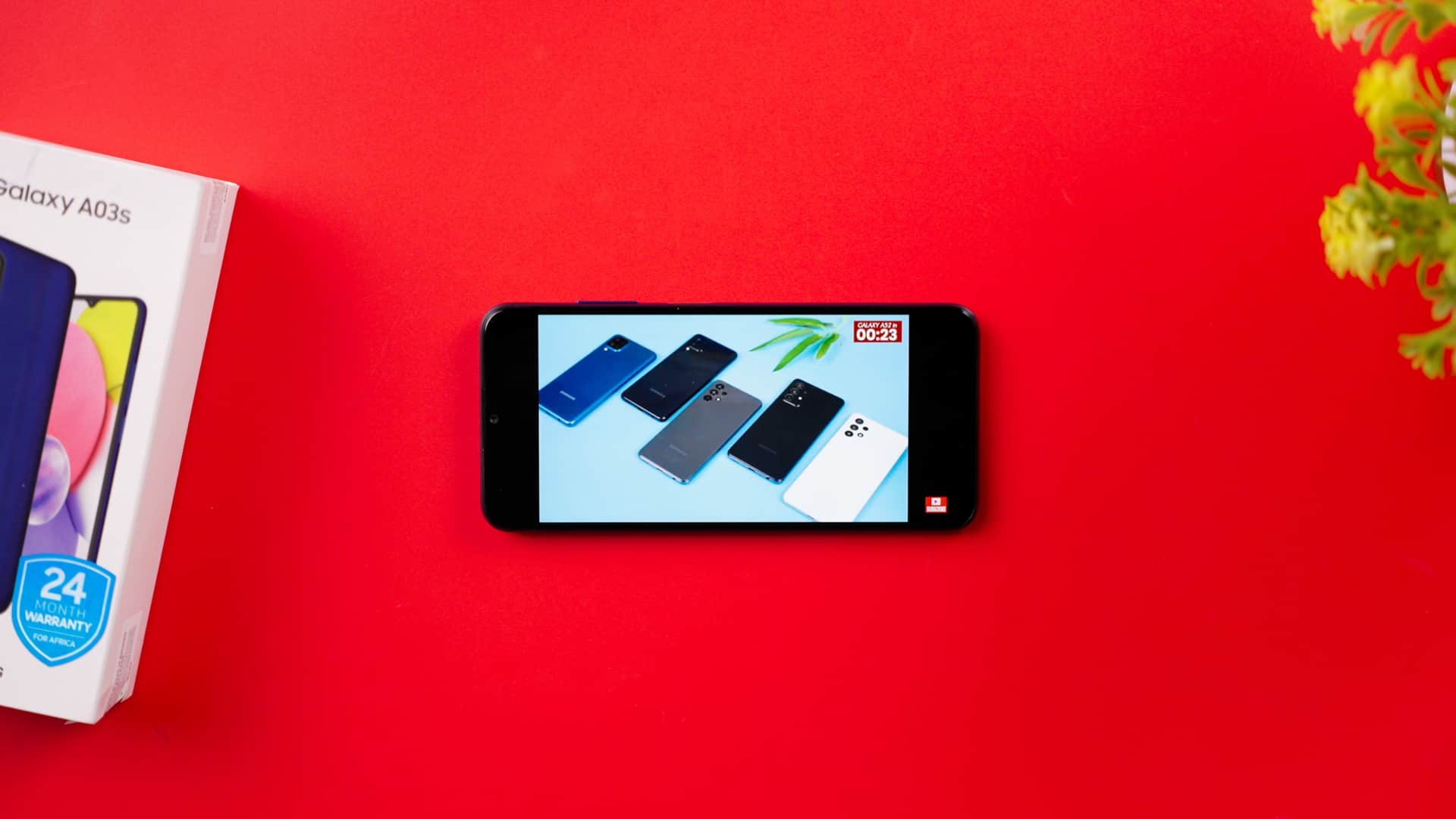 The display this time is a 6.5″ LCD panel, at an HD+ resolution, that’s 720 by 1600. This is the same display you’d get on the Galaxy A02S, it is quite decent if not a great display for the price. It’s not the brightest outdoors, but it gets the job done. 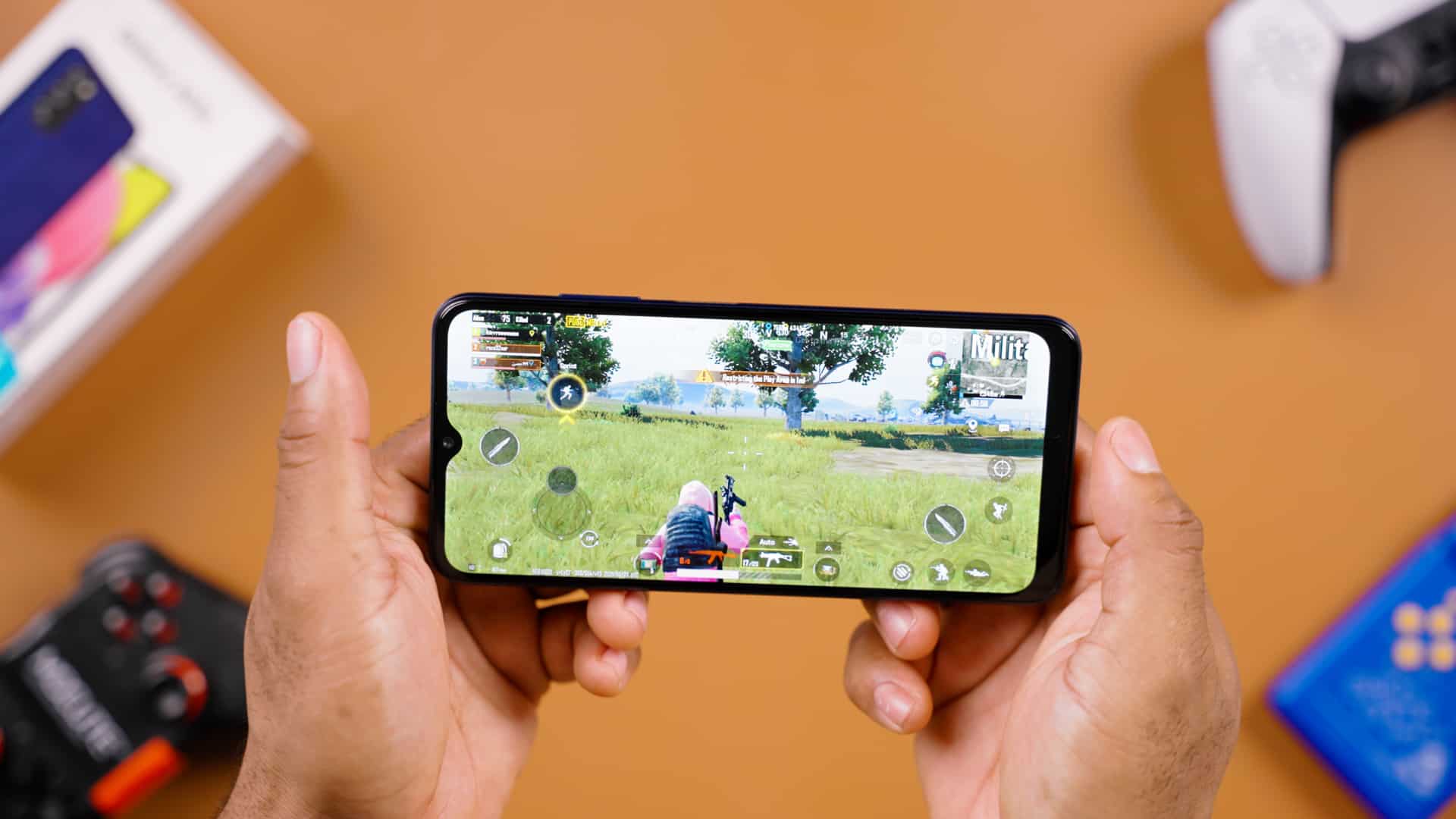 The Galaxy A03S comes in 32GB 3GB RAM and 64GB 4GB RAM variants. It houses the Helio P35 processor, comes with Android 11, and runs on One UI 3.1. Since this is an entry device you should keep your expectations in check. High title games don’t run smoothly on the Galaxy A03S, but they are playable.

You get the stutters, but if you are paying a little over a hundred dollars for a Smartphone, this should be about what you’d expect. As far as basic mobile computing needs, it is very capable.

As with most of the A series Smartphones, you’d expect at least 2 years of software updates and 3 years of security patches. 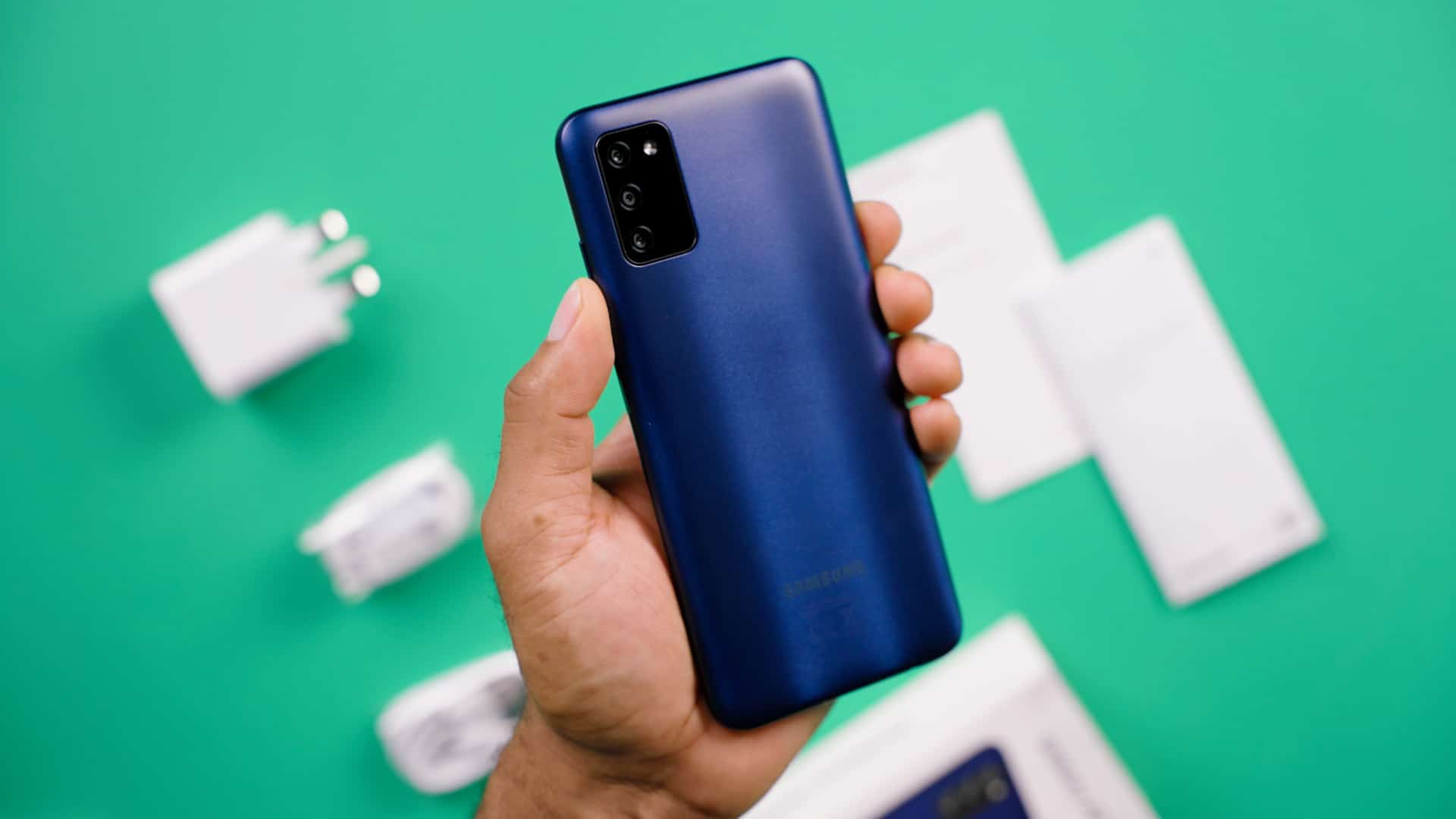 The Galaxy A03S comes with a 5000mAH battery and a 15W charger is included in the box. You should be able to juice it up to a hundred from zero in a little over 2 hours. You can easily get over 15 hours of screen on time with the A03S, and that means, depending on your usage, you could get it into the next day; it lasts for at least two days. 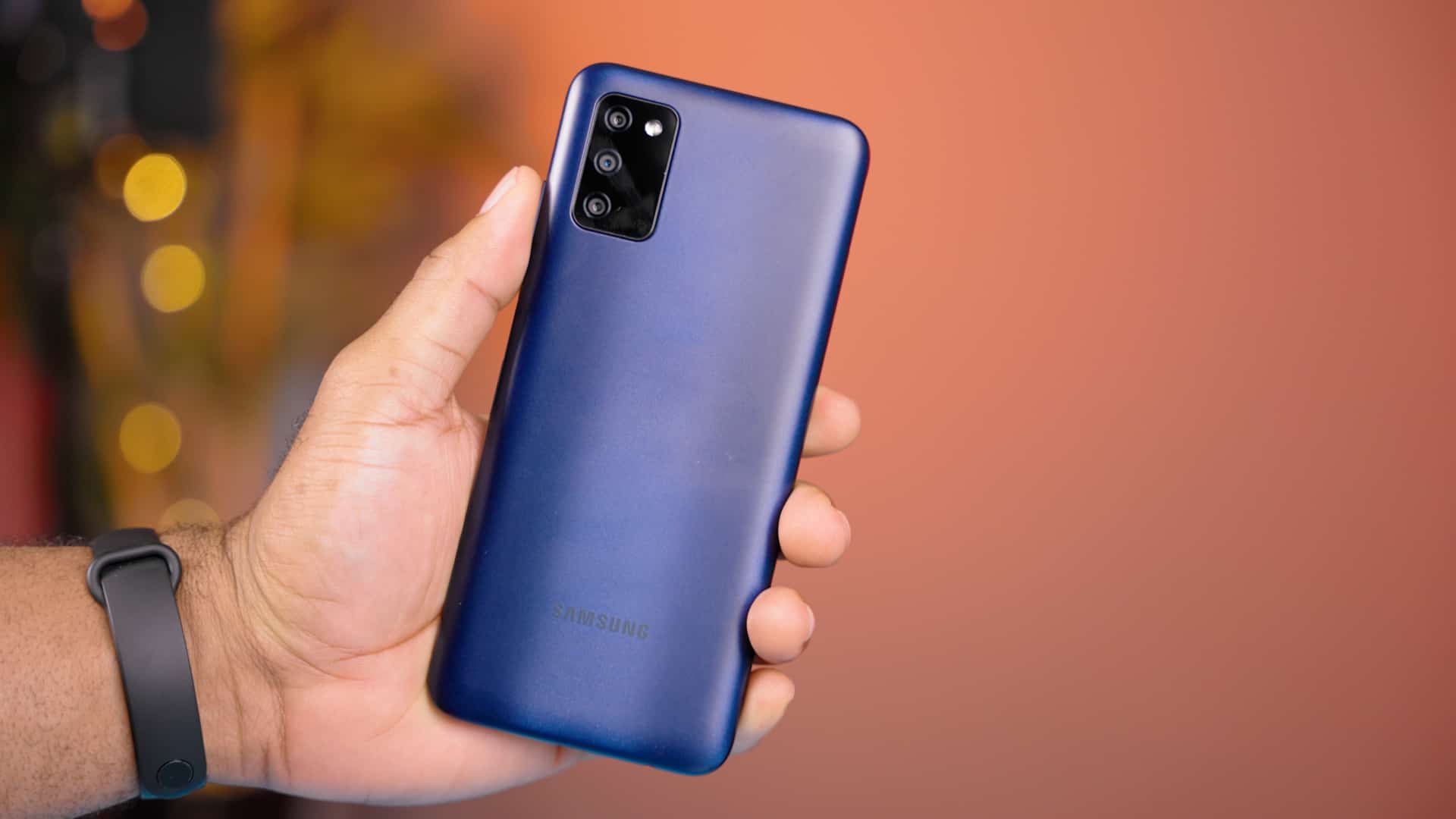 The cameras are pretty basic; three at the rear which is a 13MP main lens, 2MP macro, and a 2MP depth sensor. The front-facing camera is an almost useless 5MP sensor, we wonder why they had to do us dirty. 5MP? Photos from the front-facing cameras are not good, but usable. Videos are basic, 1080p 30fps videos, no stabilization and can come in handy when you need them. The camera strength of this Smartphone is not something that’ll wow you for the price.

Should you get the Samsung Galaxy A03S?  Well, the A03S is basically the A02S with a better processor, so if you ever had the intention of getting that device, I think this would be a better buy considering that they are closely priced.

If your budget for a Smartphone is N70,000, then it wouldn’t be wrong for you to go with this Smartphone. It checks all the boxes for devices around that price, and as with the price range, you’ll have to compromise the front cameras as aforementioned. However, it is worth the price.