2019 seems to the year for South Korean tech giant, Samsung as they release tonnes of amazing smartphones back to back. Just immediately after the announcement and release of the Samsung Galaxy A20 in Russia, Samsung dishes out another smartphone, Samsung Galaxy A40 which is I think is an upgrade to the Galaxy A20. The new smartphone was released in March 2019 and is expected to arrive any moment from now. 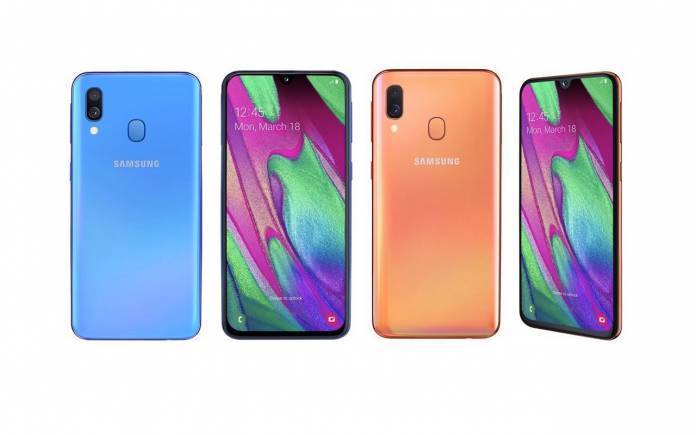 The smartphone comes in with all the basic specifications and features that every standard smartphone should come in with. The new smartphone features some obvious changes from its predecessor, the Galaxy A20 like the processor, storage memory and more. Below is everything you need to know about the Galaxy A40.

The Samsung Galaxy A40 is a smartphone which does not concentrate on offering you the best design, but more on performance than appearance. The smartphone features a simple design, though it looks premium.

You will find a centrally placed responsive fingerprint sensor which is seated far above the middle. Still, on the back side of the smartphone, you will see the dual camera sensor with a LED flashlight that aids in brighter and more detailed images. The primary camera is placed horizontally by the left-hand side of the device.

The Samsung Galaxy A40 arrives with a 5.9 inches Super AMOLED panel with Full HD and a resolution of about 1080 x 2340 pixels, which the company tagged an infinity-U display. The Infinity-U display houses the selfie camera.

When you come to the camera section of the Samsung Galaxy A40, you will notice that the smartphone comes in with a total number of three awesome camera setup, with two at the back, while the single camera is on the front.

For the selfie lovers, there is an impressive single selfie camera which consists of a 25 MegaPixel camera sensor. The selfie camera is capable recording video of [email protected]

Like I earlier mentioned, one of the major upgrades on the Samsung Galaxy A40 is its processor and other internal specifications that ensures smooth and lag-free performance.

The Samsung Galaxy A40 runs on the latest Operating System, the Android 9.0 (Pie). Still, inside the Samsung Galaxy A40, you will find the Exynos 7885 Octa (14 nm) chipset that also comes with an octa-core processor which speeds at 2.2 GHz. There is also the Mali-G71 which is specially dedicated for graphics.

Powering the Samsung Galaxy A40 is a moderate 3,100 mAh Non-removable Li-Po battery, which I think is fair enough to justify the amount the smartphone is sold.

If you have been in search of a smartphone from a notable brand, and which also comes in at a moderate price tag, then you can consider the Samsung Galaxy A40. The device ticks all the basic boxes that any standard smartphone should come along with. It features a large screen, dual primary camera, fingerprint sensor, 4GB RAM, and other nice features.