The All-screen display was made possible as a result of the adoption of a Motorized pop-up rotating cameras which doubles as both front and back camera. 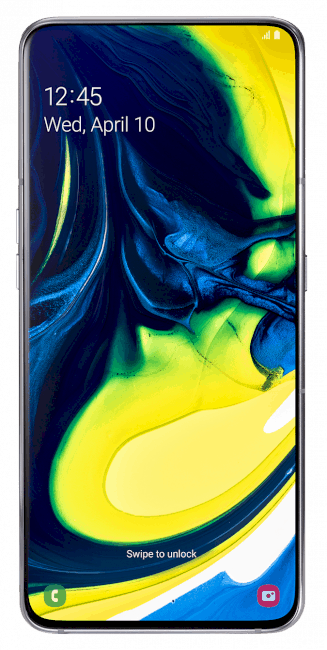 The Motorized pop-up rotating cameras are three in number one ultra wide, one regular wide, and one time-of-flight module for depth mapping. This means you will be getting selfies with the same quality as the main camera alongside other advanced depth detection features. It doesn’t just end at photos, the cameras are also capable of taking Live Focus videos.

The Samsung Galaxy A80 was announced in April and will be available by May. Apart from the performance, the cameras and Infinity display also seems to be the center of attraction. There are lots of other interesting aspects of the new smartphone which will be discussed in their appropriate sections, just stay tuned.

Just as aspected, the Samsung Galaxy A80 features an all-glass body with aluminum frames. Though the glasses on the back is different from the one used on the front.

The new device arrives with an Infinity display which means you wouldn’t find any notch nor chin. There is a jumbo size screen which is a 6.7 inches Super AMOLED display with a resolution of 1080 x 2400 pixels.

Under the screen is where the fingerprint lies (in-display fingerprint sensor). The screen also arrives with an aspect ratio of 20:9 ratio and a 393 ppi density.

We mentioned earlier that the cameras of the Samsung Galaxy A8 is the main idea of the device. The smartphone aims at young people who enjoy taking photos and sharing live videos family and friends on social media. Samsung wants to offer them the best camera experience.

The essence of adopting such a mechanism is so you can enjoy the same cameras on the back of the Galaxy A80, on the front. Unlike some smartphones that offer great rear cameras but poor selfie cameras.

The triple cameras on the smartphone consist of a 48MP sensor with an f/2.0 aperture which happens to be the default camera which shows up when you turn on the camera app.

You can also switch between it and the 8MP with an f/2.2 aperture or the ultra-wide (123 degrees) camera sensor which covers more field.

The last camera is also a 3D depth sensor which provides nice background blur for the Live Focus mode. It de-focuses the background of where you want to take the photos or video while maintaining the foreground focus.

The cameras also support Slow motion and Live Focus which performs well. But this features only works when using the setup as rear cameras and not a selfie.

Samsung only offered one version of the Galaxy A8 which comes with an 8GB RAM and 128GB for storage. Unlike most of their smartphones, the Galaxy A8 will not be supporting memory expansion. And what that means is that you are stocked with just 128GB, and that’s one of the features we don’t admire so much.

The Samsung Galaxy runs on the latest Operating System which is the Android 9.0 (Pie) alongside Samsung’s One UI on top. Samsung’s One UI features a simple, easy to use interface and understand.

Overall the performance of the smartphone was both fast and nice with all the apps responding fine.

The battery may not be up to the 4000 mAh or 500 mAh that most of the recent smartphones arrive with, but it is sure to take you through the day even with heavy usage.

Without being told, you should know that the price of a Motorized pop-up rotating cameras shouldn’t be that cheap. The smartphone sells for 650 Euro which is equivalent to $730 / N262,800 naira.

For those who want to purchase the smartphone, you will have to wait till the release date which is on the 29th of May 2019. The smartphone may likely not be available in every region on the said day. Samsung has not yet revealed the region that will be the first to officially behold the A80.

For all those who love innovative technology and gadgets, the Samsung Galaxy A80’s Motorized pop-up rotating cameras are actually fun to experience.

Nevertheless, the cameras should be the only thing you put into consideration when purchasing a smartphone. But, if what you love in smartphones centers around nice performance, great camera quality, battery life, and design then the Samsung Galaxy A80 is one device you should add to your watch list.