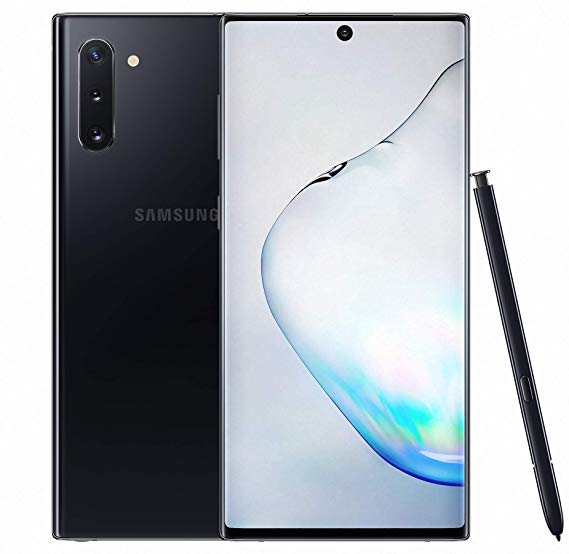 The new smartphone rocks a 6.3-inch screen in the most compatible way. It was able to achieve this as a result of its nearly bezel-free Infinity-O screen. The Galaxy Note 10 was dished out in August 2019 and is currently on sale. It arrives with an enhanced S-Pen and several other enhanced features such as the video recording features, gestures, a new pattern to mirror the device on a Personal Computer.

The Galaxy Note may not really be representing Samsung’s phablets, considering the crazy idea of a compact phablet, but you will find out the device makes a lot of sense when you use it.

As mentioned earlier, the smartphone has a small shape with a large screen nearly bezel-free Infinity-O display, though there are some trade-offs. The microSD card slot, the headphone jack on the smartphone is gone, though you still find just the MicroSD card slot on the larger Note 10 Plus.

The Note 10 features an ultra-slim bezel at the sides, top, and bottom. And… if you are wondering about the selfie camera, it was technically placed inside a punch hole on the screen. The screen of this smartphone is one of its selling points.

Despite featuring an ultra-slim frame the Note 10 still rocks a 6.3-inch AMOLED display with a Full HD resolution and a 2280 x 1080 pixels, and a 401 pixels per inch. You will enjoy using the smartphone to read text files and streaming videos.

Must Read: How To Capture A Screenshot On Your Samsung Galaxy Note 10

One of the things we admire about Note 10 is its thinner look and lightweight. The smartphone has a body dimension of 72 x 151 x 7.9mm, while it weighs 168g. As mentioned before, you will find an improved S Pen stylus.

The bottom contains the USB-C connector seated in the center, with the speaker and the S-Pen slot respectively seated on the right. The top of the smartphone only holds the SIM tray.

You will find the volume rocker with the power button below it all positioned on the left-hand side of the smartphone. There’s good news for most people, the Bixby button has been eliminated. In order to activate the Bixby features, you will have to hold the power button for a few seconds.

There are three color options that you can choose from when purchasing the Note 10; there is the Aura Black, the Pink, and Aura Glow which has a combination of blue and white.

The camera system of the Galaxy Note 10 is virtually the same thing as the ones you find on the Galaxy S10 or S10 Plus. There is no exciting or major upgrade. You will still find the same triple 16-MegaPixel ultra-wide lens, a 12-MegaPixel regular lens, and a 12MP telephoto lens.

Must Read: How To Tweak Samsung Note 10 Settings For Better Battery Life

The combination however still deliver an exciting and a beautiful photography experience just like we have on the Galaxy S10. The images produced were impressive like the ones produced by some of the recent high-end Samsung smartphones.

There are two types of the smartphone with different performance; the US version with a  Qualcomm Snapdragon 855 processor and the UK (and other countries around the world) version which uses the latest Exynos 9825 chipset.

Must Read: Samsung Galaxy A70 Review – Specs, Features and Price

The Exynos 9825 chipset is built the  7nm EUV technology. Inside the smartphones, you will find the large 8GB RAM for multitasking purpose. As we mentioned earlier, the microSD card is no more and we are left with just the 256GB internal storage.

The Samsung S Pen stylus was also available which allows you to draw, take down notes and a lot more. Like we mentioned earlier, the S Pen has been improved and features such as gesture controls, video or gallery, and as the cameras by moving the S Pen in different directions.

The smartphone does not support the 5G network, so if you want a smartphone that comes with a 5G network, then you should try the more expensive 5G version of the Galaxy Note 10 Plus.

The same is not true for the Note 10, as it will require a little bit management to get through the day with heavy usage. The battery in the Note 10 is a 3,500mAh Non-removable battery about the same hours like the Note Galaxy S10 which is quite impressive.

The Galaxy Note 10 is currently on sale with a price tag of $940/£860. U.S. major authorized carriers who are selling the Note 10, includes AT&T, Verizon, T-Mobile, and Sprint.

If you are a fan of the S Pen but don’t want to handle a jumbo size smartphone, then the Galaxy Note 10 is the smartphone for you. Note 10 happens to be the smallest Samsung phone to rock the S Pen.

Most people are of the view that the only reason to buy the Galaxy Note 10 is because of its size alongside the S Pen. Thought the smartphone brings in a premium design, great performance, a huge and beautiful screen, but the Galaxy S10 which also brings the same interesting specifications and features sales for less than the Note 10.