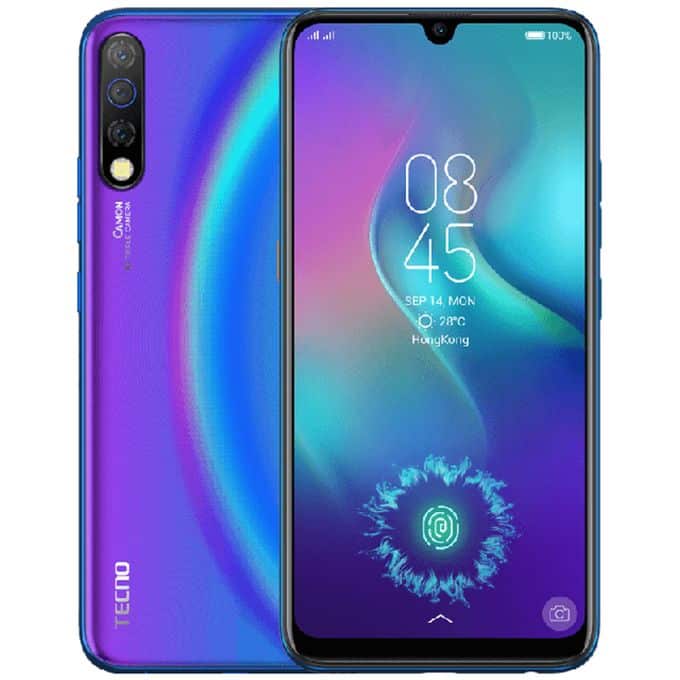 Today on this page, we will be reviewing the Camon 12 Pro; talking about the best of it, the worst of it, the price at which you can currently purchase it, and other reasons why you should either buy or not buy the Camon 12 Pro. So, without wasting our time, let’s see if the new smartphone is worth splashing those extra bucks of yours on, or going for the big version.

There is little to almost no difference in the design and build of the Tecno Camon 12 Pro and its younger siblings. Apart from the display type which has been upgraded and other little changes which will be discussed here, you will almost find no difference.

Just like the Tecno Camon 12, the Pro also maintains the plastic body build presented in different beautiful colors. On the front of the Camon 12 Pro, you will find the 6.4-inch AMOLED screen, which is an upgrade from the IPS display used by the standard version of the Tecno Camon 12. As a matter of fact, the Camon 12 Pro’s AMOLED boasts a 100000:1 contrast ratio which simply means more sharp contrast.

The power button and the volume rocker is on the right side of the smartphone, while at the bottom you get the 3.5mm jack, USB port, and the loudspeaker.

Meanwhile, the back of the smartphone looks empty and simply as a result of the fingerprint sensor that has been moved from the back and now under the screen. On the back, you will only find the triple vertical camera setup accompanied by an LED flash beneath.

Just as we mentioned earlier, there is no much difference between the Camon 12 and Tecno Camon 12 Pro and the same applies in the camera section. The only notable difference is in the selfie camera.

Instead of arriving with a 16-megapixel selfie camera sensor, the Camon 12 Pro now uses a 32MegaPixel shooter which performs a lot better than its younger siblings.

The Camon 12 Pro has a total number of four (4) cameras which comprises the triple primary cameras and the single selfie camera. The primary camera setup is made up of a 16 MegaPiexel for AI scene detection, and the second is an 8MegaPixel sensor for wide-angle shots, and finally, we have the 2 MegaPixel used for depth sensing.

The main camera which is the 16MegaPixel shooter is an f2.0 aperture which also comes with other interesting features like the AI scene detection and the AI HDR (which offers AI optimization). The dual flash at the back of the Tecno Camon 12 Pro is the same as the one on the vanilla Phantom 9 and the Camon 12. The LED flash flanks the earpiece on both sides.

Powering the new budget smartphone is an impressive MediaTek Helio P22 chipset which seems to be the company’s (Tecno Mobile) standard processor for high-end devices this year.

The Tecno Camon 12 Pro also features an octa-core chipset that assists and ensures that the performance of the smartphone is great. Just like the younger siblings, the Camon 12 Pro also brings along a 6GB RAM which will take care of all your multitasking purposes and smooth running of your applications.

Meanwhile, for all your storage purposes, you have the 64GB internal storage, which can be further expanded with the help of a dedicated microSD card slot.

The Camon 12 Pro was programmed to run on the latest Operating System which is the Android 9 Pie assisted by the Tecno Mobile Operating System, the HiOS 5.5 which allows you to change and tweak the hell out of the budget device.

To be sincere with you, my biggest disappointment lies in the battery of the Tecno Camon 12 Pro. Just like most people, I had also expected the Camon 12 Pro to ship in with a much bigger battery than that of its younger brother which is the standard version of the Camon 12.

To my greatest surprise, the Tecno Camon 12 Pro arrived with a 3500mAh battery which is less impressive than that of the 4000 mAh seen on its younger sibling, the standard version of the Camon 12.

If you love this smartphone and wish to obtain one to yourself, then you can visit most online stores or any authorized Tecno Mobile smartphone dealer near. Nevertheless, the price tag might be slightly different depending on your location and region.

Just like all the recently dished out Camon Series, the Tecno Camon 12 Pro is a smartphone that offers you features that you can only expect from high-end devices and other impressive mid-range smartphones.

The Camon 12 Pro doesn’t just end at providing you with high-end features, but it also offers all those interesting features to you at an affordable price. Apart from the battery which I was disappointed at; not because it has any fault, but because we had expected it to be higher than that of its younger siblings. Apart from that, the Camon 12 Pro is a great smartphone that offers you a run for your money.